Are you better off today than you were four years ago?  If not, then you are just like most other Americans.  According to a CBS News/New York Times poll that was released a few days ago, 80 percent of Americans say that their financial situation is not “better today” than it was four years ago.  But if you turn on the television and listen to what the “pundits” are saying, you would be tempted to think that we were in the midst of a robust economic recovery.  You would be tempted to think that the U.S. economy is in great shape and that we are heading for a really bright future.  But the fact that the stock market is soaring does not mean much to most Americans.  In fact, most Americans couldn’t care less that the Dow is well above 13,000 and that the NASDAQ is above 3,000.  What most Americans care about is having a job and being able to provide for their families.  If you haven’t paid the mortgage in three months or if you don’t have enough money to take your daughter to go see the doctor it really is not going to matter to you how well the boys and girls over on Wall Street are doing.  Right now most American families are doing worse than they were doing four years ago, and no amount of media hype is going to change that fact.

Yes, the stock market is doing really well for the moment, but the truth is that more than 50 percent of all stocks and bonds are owned by just 1 percent of the U.S. population.

Good for them.  It looks like the trillions of dollars that the Federal Reserve poured into the big Wall Street banks is really paying off nicely for the financial community.

Meanwhile, much of the rest of the country is deeply suffering.

It was recently reported that 1.5 million American families live on less than two dollars a day (before counting government benefits).

According to the U.S. Census Bureau, the percentage of Americans living in “extreme poverty” is now sitting at an all-time high.

All across this country poverty is exploding.  Food banks are experiencing more demand than ever before and those offering free healthcare are absolutely swamped.

And every single measure of government dependence has gone way up since Barack Obama entered the White House.

For example, since Barack Obama became president the number of Americans on food stamps has gone up by 45 percent.

At this point the federal government is helping to feed an all-time record 46.5 million Americans every month.

According to the U.S. Census Bureau, 49 percent of all Americans live in a home that receives direct monetary benefits from the federal government.

That is much higher than it has been historically.

For example, back in 1983 less than a third of all Americans lived in a home that received direct monetary benefits from the federal government.

The big problem is that there are simply not enough jobs for everyone.

Listening to the media, you would be tempted to think that the U.S. economy is now pumping out huge numbers of good jobs.

But that is simply not the case.

Right now there are 5.6 million fewer jobs than there were when the last recession began back in late 2007.

So where are the millions of jobs you promised us Obama?

The federal government is trying to convince us that the unemployment rate is going down, but that is not really true.

The key is to look at the percentage of working age Americans that actually have jobs.  During the last recession that percentage fell dramatically as you can see from the chart below.  After every other recession since World War II the employment to population ratio has always bounced back.  But it has not happened this time.  Instead, the employment to population ratio has remained between 58 and 59 percent since the end of 2009…. 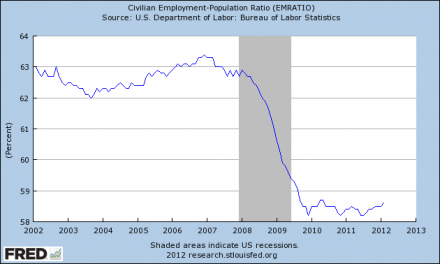 We have not had a jobs recovery.  Hopefully we will have one before the next recession hits, but we are running out of time for that.

Tonight there are millions upon millions of hard working Americans that are staring at their television screens and wondering why they can’t find good jobs.  The pretty people on television are telling them that the employment situation is getting much better but they can’t find work no matter how hard they try.  It is a cruel joke on them.

When Barack Obama entered the White House, the number of “long-term unemployed workers” in the United States was approximately 2.6 million.  Today, that number is sitting at 5.6 million.

Thanks for the improvement Obama.

Meanwhile, the average duration of unemployment continues to hover near a record high.  Just look at the chart posted below.  Does this look like a “jobs recovery” to you?…. 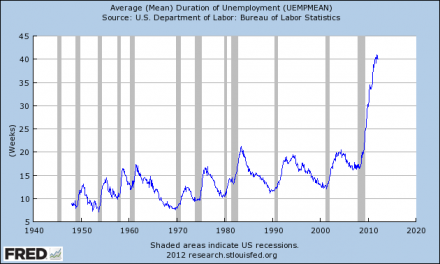 But of course Obama and those that support him want to make things sound like they are getting better.  They want people to run out and vote for him again in November.

If things are going well for you right now, be thankful, and also remember the millions upon millions of Americans out there that are deeply hurting in this economy.

If you gathered together all of the workers that are “officially” unemployed in the United States at this point into one nation, they would constitute the 68th largest country in the entire world.  It would be a nation larger than Greece or Portugal.

So where is the help for Main Street?

In the United States today, the wealthiest one percent of all Americans have a greater net worth than the bottom 90 percent combined.

How much wealthier do they have to get before they start creating more jobs for the rest of us?

Obama (like most of our politicians) is a complete fraud when it comes to the economy.  He is all saddle and no horse.  He talks a good game but he doesn’t have any game.

As Wall Street has recovered, the rest of the country has actually been in decline.  Median household income in the United States is down 7.8 percent since December 2007 after adjusting for inflation.  Millions of American families are reaching the breaking point and millions of other families have already reached it.

Incomes have been declining but the cost of living has not.

The average price of a gallon of gasoline in the United States has increased by more than 90 percent since Barack Obama became president.

Has your paycheck increased by 90 percent?

Millions of American families have lost their homes while Obama has been president and millions more will soon lose their homes.  At this point there are more than 6 million mortgages in the United States that are overdue.

It is a horrible, horrible feeling to know that you can’t pay your mortgage and that you will soon lose your home and your family will be put out on the street.

None of us would ever want to end up in that situation.

And the housing market sure has not shown any signs of recovery under Barack Obama.

In January, U.S. home prices were the lowest that they have been in more than a decade.

Weren’t home prices and home sales supposed to be turning around by now?

That trend is not going in the right direction.

But one area where Barack Obama has had a huge impact is in the area of government spending.

While Barack Obama has been president, the U.S. national debt has risen from 10.6 trillion to 15.5 trillion.

During the first three years of the Obama administration, the U.S. government has accumulated more debt than it did between 1776 and 1995.

So is Obama planning a change of course?

At this point, our national debt is increasing by about 150 million dollars every single hour.

So should we be thanking Obama for stealing 150 million dollars from our children and our grandchildren every hour?

Should we be thanking Obama for ruining our future?

According to the CBS News/New York Times poll mentioned above, about half of America would actually vote for Obama if the next presidential election was held today.

That alone is a clear sign that this country is in a massive amount of trouble.

The truth is that the leaders we elect are an accurate reflection of who we are as a country.

And when you look at the collection of misfits in Washington D.C. right now, that does not say a lot about the character of this nation.

So where does America go from here?

That is up to you America. 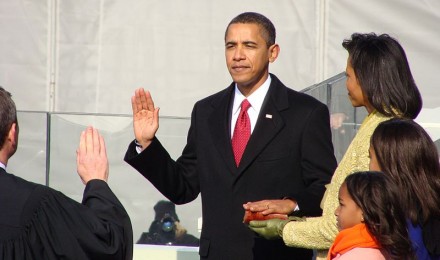