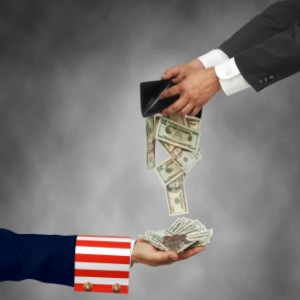 When you talk to most Americans about taxes, primarily what they think about is the U.S. government and the federal income tax.  But while that may be the biggest tax that most Americans pay, the reality is that the truly insidious nature of the tax system in the United States is how it sucks money out of us in dozens of different ways until we don’t even feel it anymore.  Instead of having one or two big tax bills, U.S. taxpayers face a “death by a thousand cuts” as tax after tax after tax just keeps coming.  Most Americans don’t even realize how many kinds of taxes they pay.  Before reading the rest of this article, try to estimate how many different kinds of taxes that Americans pay each year.  Five?  Ten?  Twenty?  Well, below we have listed over 50 different kinds of taxes that Americans pay.  It is no wonder the Tea Party movement is growing so fast!  People are sick and tired of constantly being financially drained by tax after tax.  But even as you read this, members of the White House panel charged with reducing the U.S. national debt are considering recommending the adoption of a “European-style” Value Added Tax as a way for the U.S. government to bring in even more money.

Well, the truth is that millions upon millions of Americans are quite sick of being taxed into financial oblivion and they have one giant message for those who want to tax us some more….

“We Are Being Taxed Enough Already!”

Just consider the following list of the various types of taxes that Americans have to pay each and every year…..

When you add all the taxes together, a significant percentage of Americans end up paying well over 50 percent of their income in taxes of one form or another.

And the list above does not even include all of the new taxes that are in the new health care law that was just rammed down the throats of the American people.

When you add up all the taxes in that bill, it amounts to the largest tax increase in the history of the United States.

But if you enjoy being taxed until you are dry then none of this should bother you.

Sadly, according to an official U.S. government report, even with all of this taxation rapidly growing interest costs on the national debt together with spending on major entitlement programs such as Social Security and Medicare will absorb approximately 92 cents of every dollar of federal revenue by the year 2019.  That is before a penny will be spent on anything else.  Because of our reckless financial insanity, the U.S. government is now facing a financial crisis of unprecedented magnitude.

But whatever we end up giving to the federal government just never seems to be enough.  It’s voracious appetite for spending just seems to multiply the bigger it gets.

We are being taxed into oblivion and yet the U.S. government apparently has no shame in stealing increasing amounts of money from future generations year after year after year.

Do you think that the U.S. federal government will one day wake up and decide that we are being taxed enough already?

The truth is that unless we vote out all of the Republicans and all of the Democrats that have been taxing us to death, they will keep right on doing it.