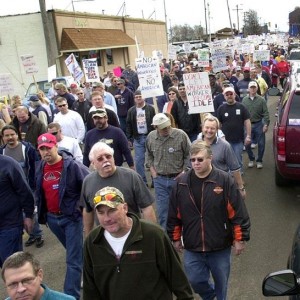 One of the great joys that men in free societies have long enjoyed is the ability to earn an honest wage for an honest day of work.  In particular, the amazing capitalist engine that powered the U.S. economy for decade after decade greatly rewarded the incredible hard work and industriousness of the American people.  America was known as the land of opportunity, and we built the largest middle class in the history of the world by working incredibly hard.  But today, all of that is fundamentally changing.  Thanks to rapid advances in technology, and thanks to the globalization of the work force, the labor of American workers is rapidly losing value.  Automation, robotics and computers have made many jobs obsolete.  Today one man can do the work that a hundred men used to do.  Not only that, but today American workers literally have to compete against workers from all over the globe.  Global corporations often find themselves having to choose whether to build a factory in the United States or in the third world.  But in the third world workers often earn less than 10% of what American workers earn, corporations are often not required to provide any benefits to workers, and there are usually hardly any oppressive government regulations.  How can American workers compete against that?

The truth is that labor is now a global commodity.  How can an American worker compete against a desperate, half-starving worker in the third world that will work like mad for a dollar an hour?

But this is what we get for letting the politicians push “free trade” down our throats.

Most American workers had no idea that free trade would mean that they would suddenly be competing for jobs against workers in the Philippines and Malaysia.

But that is the cold, hard reality of globalism.

All of this free trade has been very hard on American workers as factory after factory has closed, but it has allowed the big corporations to get exceedingly wealthy.

The top executives at the big global corporations are certainly enjoying all of this free trade.  Their salaries have soared.

That is what globalism is all about.

The elite make out like bandits as they exploit third world labor pools, while the American middle class finds itself slowly being crushed out of existence.

According to the United Nations Gini Coefficient (which measures distribution of income), the United States has the highest level of inequality of all of the highly industrialized nations.

Increasingly, all of the rewards are going to those at the top, while the vast majority of Americans are left wondering why things just don’t seem to work out for them.

According to economists Thomas Piketty and Emmanuel Saez, two-thirds of income increases between 2002 and 2007 went to the wealthiest 1% of Americans.

Life is good if you are in the top one percent.

Unfortunately, that does not include any of us.

Instead, the American middle class is gradually being pushed into lower paying service jobs.  But it is really hard to feed a family by cutting hair or by greeting the folks who come walking into the local Wal-Mart.

If you talk to many Americans, they just can’t seem to figure out why they can’t make things work out even though they are working as hard as they can.  Millions of Americans have found themselves taking on second (and in many cases third) jobs in an attempt to provide for their families.

But what they don’t understand is that the global elite have turned labor into a globalized commodity.

But that is your competition.

Wages are being driven down and big global corporations are loving it.

This is the global elite pushing us into a cruel system of economic slavery where they control all of the wealth and the rest of us struggle to survive as we work our tails off for them.

Already we are seeing large numbers of Americans becoming absolutely desperate to get even a low paying job.

For example, over one three day period, approximately 10,000 people showed up to apply for 90 jobs making washing machines in Kentucky for $27,000 a year.

But that is considered a good wage now.

Actually, the folks who are making really good wages now are those who work for the U.S. government.

Yes, life is good if you are a servant of the system.

Today, the average federal worker now earns about twice as much as the average worker in the private sector.

Of course government employees basically produce next to nothing except red tape.

The U.S. government doesn’t seem to care if they are productive or not.  They just keep borrowing more money and getting us into even more financial trouble.

But at least there is somewhere for middle class families to get decent jobs.

In fact, it is getting really hard to live a middle class lifestyle in America without relying on the government in some way.

The truth is that good jobs are becoming increasingly scarce.

That is why it is absolutely imperative for all of us to try to become as independent as possible.

That means getting out of debt.

That means starting our own businesses.

That means learning how to grow a garden.

Many of those who continue to blindly rely on the system to provide them with a “job” (“just over broke”) will end up bitterly disappointed in the end.

Millions of Americans have already lost their jobs and millions more Americans will lose their jobs as we move along through the next few years.

In fact, with all of the amazing advances in technology that we have seen over the past couple of decades, the global elite are starting to realize that they really don’t need 6 billion workers after all.

Instead, those among the global elite are increasingly viewing all of us as a burden.  They openly ask why they should have to take care of so many “useless eaters”.  After all, if the system does not need all of us to keep functioning, then what good are we to them?

So these days you are starting to hear a lot about the dangers of “overpopulation” and the need to control population growth.

So what was the topic?

One anonymous attendee of the meeting was quoted in a U.K. newspaper as saying that overpopulation “is something so nightmarish that everyone in this group agreed it needs big-brain answers.”

Instead of being viewed as valuable workers, now we are being viewed by the elite as pests that have multiplied to the point where we are now out of control.

What a strange world we live in now.

We need to get back to the America where good workers are valued and where hard work is rewarded.

We need to get back to the America where having a large middle class is an important national goal.

We need to get back to the America where we build American businesses, where we hire American workers and where we buy American products.

But unless the American people wake up, American workers are going to continue to be devalued.

Are we actually going to sit back and let American living standards decline to third world standards?

It is up to this generation to reject globalism and to reclaim the great free enterprise principles that this nation was founded on.

If someday our children and grandchildren exist in a world where they are considered just another part of the third world labor pool they will know who to blame.