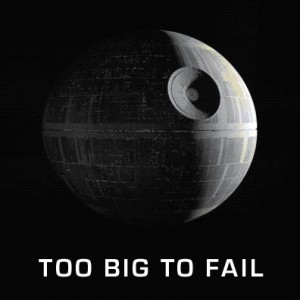 The massive federal bailouts that Congress passed in 2008 and 2009 were supposed to stabilize the banking system and breathe new life into the U.S. economy.  We were told over and over that the major banks were “too big too fail” and that the U.S. government was helping “Main Street” by giving massive bailouts to Wall Street.  But unfortunately all that is not working out too well.  Instead, the major banks (which got the bailouts) have cut their collective small business lending for the seventh month in a row while the feds are letting all the small banks die like dogs.

The truth is that the major Wall Street banks that had friends positioned in the U.S. government were able to get massive bailouts during the economic collapse of 2008/2009, but all of the small banks that have been so good to so many communities across the United States for so many years are not getting any help.  In fact, there are rumors that they are purposely being allowed to fail.  In 2009, 140 banks and S&Ls failed.  In addition, 31 credit unions went under.  So that makes a total of 171 lending  institutions that were allowed to collapse in 2009.  It is estimated that the bank failures during this financial crisis have already cost the FDIC ten times more than the entire S&L crisis of the 1980s did.

But the crisis is far from over.  In fact, some analysts are now projecting that 200 banks will fail in the U.S. in 2010.

The FDIC is officially in the red and it is rapidly hemorrhaging cash and there is no sign that the bleeding is going to stop any time soon.  Small banks are failing at a rate that is beyond alarming.

But do you know what they are being told when they turn to the U.S. government for help?

They are being told to go find a big bank that is willing to gobble them up.

In fact, there are persistent rumors that the banking system is being consolidated by design.  So if that is the case, expect to see a lot more small banks continue to fail and get gobbled up by the sharks for pennies on the dollar.

Meanwhile, the big boys on Wall Street are being criticized for the gigantic year end bonuses that their top executives will be receiving.

Life is good if you are a bankster.

So are all of those big Wall Street banks helping out “Main Street” by lending to small businesses?

In fact, the biggest banks in the U.S. cut their collective small business lending balance by another $1 billion in November.  That drop was the seventh monthly decline in a row.

The truth is that in modern America, small businesses are incredibly dependent on credit.  For many small businesses, no credit means that they simply will not have the capital to operate.

But the big fat cats who got all of those bailouts have reduced their lending to small businesses each of the past seven months.

So, no, “Main Street” is not reaping the benefits of all of those bailouts.

Apparently the big banks needed to save up cash to pay all of those outrageous bonuses.

So all of the big banks are hoarding cash, and hundreds of small banks are being allowed to die like dogs.

Anyone have any ideas for cleaning it up?