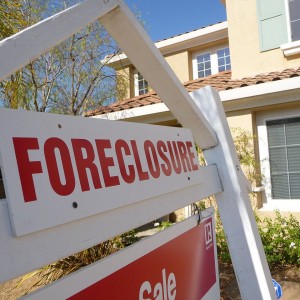 There are very few segments of the U.S. economy that are more heavily affected by interest rates than the real estate market is.  When mortgage rates reached all-time low levels late last year, it fueled a little “mini-bubble” in housing which was greatly celebrated by the mainstream media.  Unfortunately, the tide is now turning.  Interest rates are starting to move up steadily, even though the Federal Reserve has been trying very hard to keep that from happening.  A few weeks ago, when Federal Reserve Chairman Ben Bernanke suggested that the Fed may start to “taper” the rate of quantitative easing eventually, the bond market had a conniption and the yield on 10 year U.S. Treasuries shot up dramatically.  In an attempt to calm the market, the Fed stopped all talk of a “taper” and that helped settle things down for a brief period of time.  But now the yield on 10 year U.S. Treasuries is starting to rise aggressively again.  Today it closed at 2.71 percent, and many analysts believe that it will go much higher.  This is important for the housing market, because mortgage rates tend to follow the yield on 10 year U.S. Treasuries.  And if mortgage rates keep rising like this, another great real estate crash is inevitable.

This wasn’t supposed to happen.  Federal Reserve Chairman Ben Bernanke said that he could use quantitative easing to control long-term interest rates.  He assured us that he could force mortgage rates down for an extended period of time and that this would lead to a housing recovery.

But now the Fed is losing control of long-term interest rates.  If this continues, either the Federal Reserve will have to substantially increase the rate of quantitative easing or else watch mortgage rates rise to absolutely crippling levels.

Three months ago, the average rate on a 30 year mortgage was 3.35 percent.  It has shot up more than a full point since then…

Mortgage buyer Freddie Mac said Thursday that the average on the 30-year loan rose to 4.39% from 4.31% last week. Rates are a full percentage point higher than in early May.

And as the chart below shows, mortgage rates have a lot more room to go up… 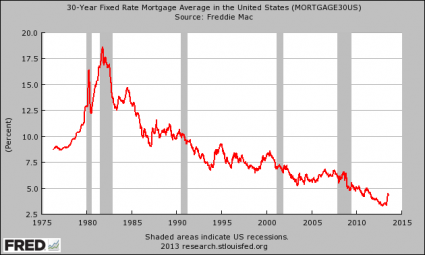 As mortgage rates go up, so do monthly payments.

And monthly payments are already beginning to soar.  Just check out this chart.

So what happens if mortgage rates eventually return to “normal” levels?

Well, it would be absolutely devastating to the housing market.  As mortgage rates rise, less people will be able to afford to buy homes at current prices.  This will force home prices down.

To a large degree, whether or not someone can afford to buy a particular home is determined by interest rates.  The following numbers come from one of my previous articles…

Rising interest rates will also have a dramatic impact on other areas of the real estate industry as well.  For example, public construction spending is now the lowest that it has been since 2006.

And I find the chart posted below particularly interesting.  As a Christian, I am saddened that construction spending by religious institutions has dropped to a stunningly low level… 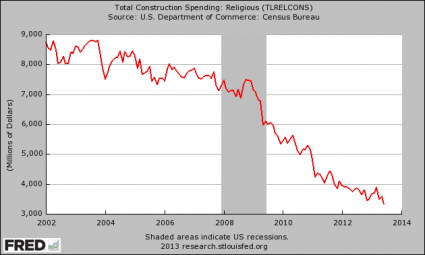 Well, unless interest rates reverse course it appears that we are in the very early stages of another great real estate crash.

Only this time, it might not be so easy for the big banks to swoop in and foreclose on everyone.  Just check out the radical step that one city in California is taking to stop bank foreclosures…

Richmond is the first city in the country to take the controversial step of threatening to use eminent domain, the power to take private property for public use. But other cities have also explored the idea.

Banks, the real estate industry and Wall Street are vehemently opposed to the idea, calling it “unconstitutional” and a violation or property rights, and something that will likely cause a flurry of lawsuits.

Richmond has partnered with San Francisco-based Mortgage Resolution Partners on the plan. Letters have been sent to 32 servicers and trustees who hold the underwater loans. If they refuse the city’s offer, officials will condemn and seize the mortgages, then help homeowners to refinance.

If more communities around the nation start using eminent domain to stop foreclosures, that is going to change the cost of doing business for mortgage lenders and it is likely going to mean more expensive mortgages for all the rest of us.

In any event, all of this talk about a “bright future” for real estate is just a bunch of nonsense.

You can’t buy a home if you don’t have a good job.  And as I wrote about the other day, there are about 6 million less full-time jobs in America today than there was back in 2007.

You can’t get blood out of a stone, and you can’t buy a house on a part-time income.  The lack of breadwinner jobs is one of the primary reasons why the homeownership rate in the United States is now at its lowest level in nearly 18 years.

And we aren’t going to produce good jobs if our economy is not growing.  And economic growth in the U.S. has been anemic at best, even if you believe the official numbers.

So precisely what are we supposed to believe?

Overall, since Barack Obama has been president the average yearly rate of growth for the U.S. economy has been just over 1 percent.

That isn’t very good at all.

But remember, the government numbers have been heavily manipulated to look good.

The reality is even worse.

According to the alternate GDP numbers compiled by John Williams of shadowstats.com, the U.S. economy has continually been in a recession since 2005.

And now interest rates are rising rapidly, and that is very bad news for the U.S. economy.

I hope that you have your seatbelts buckled up tight, because it is going to be a bumpy ride.