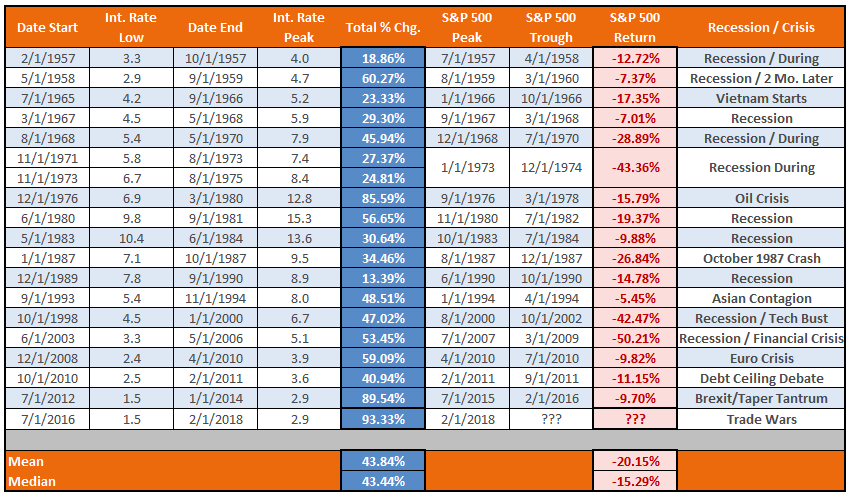 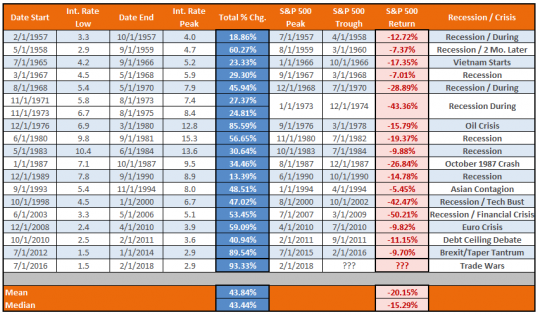 Since 1913, the Federal Reserve has engaged in 18 distinct interest rate hiking campaigns, and in every single one of those instances the end result was a large stock market decline, a recession, or both.  Now we are in the 19th rate tightening cycle since 1913, but many of the experts are insisting that things will somehow be different this time.  They assure us that the U.S. economy will continue to grow and that stock prices will continue to soar.  Of course the truth is that if something happens 18 times in a row, there is a really, really good chance that it will happen on the 19th time too.  For years I have been trying to get people to understand that our country has been on an endless roller coaster ride ever since the Fed was created back in 1913.  Things can seem quite pleasant when the economy is on one of the upswings, but the downswings can be extremely painful.

It was economist Lance Roberts that pointed out this correlation between rate hiking cycles and economic troubles.  When I came across his most recent article, it really got my attention…

A sustained interest rate hiking campaign, as undertaken by the Fed, has always resulted in negative stock market returns.

Always. Not usually, not might-be-correlated-to. Always. As in, 18 out of 18 times. Until now. When we’ve had the single highest percentage increase in history (93.33% peak to trough, so far).

To support his claims, he posted this chart…

So far, however, there hasn’t been a huge stock market drop or a recession during this rate hiking cycle.

Is the 19th time going to be fundamentally different?

So what gives? Of course, it’s the Fed. Having kept interest rates near zero for years on end and having filled corporate coffers with super cheap debt used to fuel market-bubble-sustaining corporate buybacks, the Fed has delayed the inevitable stock market correction.

I definitely agree with Roberts – a colossal stock market correction is inevitably coming.

And the warning signs are all around us.  As I have discussed so many times before, junk bonds are often an early warning sign for a major financial crisis, and it is extremely interesting to note that it looks like Deutsche Bank is planning a “fire sale” of their energy junk bonds.  The following analysis comes from Zero Hedge…

Bloomberg reports that Deutsche is planning to sell the loan book as a whole and has marketed it to North American and European peers, said one of the people. The portfolio is expected to sell for par value, said the people, who asked not to be identified because they weren’t authorized to speak publicly; good luck with that!

The bank’s energy business is expected to wrap up on June 30, one of the people said. The bank has been an active lender in the energy space in the past year, participating in the financing of companies including Peabody Energy Corp. and Coronado Australian Holdings Pty., according to data compiled by Bloomberg.

So to summarize: Moody’s is warning that when the economy weakens we will see an avalanche of defaults like we haven’t seen before; Corporate debt-to-GDP and investor risk appetite is reminding a lot of veterans of previous credit peaks; and now the most desperate bank in the world is offering its whole junk energy debt book in a firesale… just as high yield issuance starts to slump.

To me, that is one of the strongest indications yet that things are about to take a major turn for the worse for the global financial system.

And even former Federal Reserve chair Ben Bernanke is sounding quite pessimistic these days.  The following comes from a Bloomberg article entitled “Bernanke Says U.S. Economy Faces a ‘Wile E. Coyote’ Moment in 2020”…

The stimulus “is going to hit the economy in a big way this year and next year, and then in 2020 Wile E. Coyote is going to go off the cliff,” Bernanke said, referring to the hapless character in the Road Runner cartoon series.

When you read that quote, alarm bells should have been going off in your head.

If his forecast is accurate, that means that the U.S. economy’s Wile E. Coyote moment will come just in time for the 2020 election…

The timing of Bernanke’s possible slowdown would line up badly for Trump, who has called the current economy the best ever and faces reelection in late-2020.

Wouldn’t that be convenient for the elite?

U.S. voters tend to be extremely influenced by the performance of the economy, and so a major economic downturn would not bode well for Trump’s chances.

Similarly, if a major crisis erupts during the second half of this year, it will probably mean big problems for Republicans in November.  Timing is everything in politics, and when the next crisis comes most voters won’t even consider the fact that it had been building for a very, very long time.  All they will care about is who is in office at the time.

But for the moment, most of the “experts” are assuring us that things will be rosy for the foreseeable future.  For example, a couple of prominent analysts over at Goldman Sachs are saying that tech stock prices are likely to continue to rise…

“Unlike the technology mania of the 1990s, most of this success can be explained by strong fundamentals, revenues and earnings rather than speculation about the future,” strategists Peter Oppenheimer and Guillaume Jaisson wrote in a note. “Given that valuations in aggregate are not very stretched, we do not expect the dominant size and contribution of returns in stock markets to end any time soon.”

And the optimists will continue to be right up until the moment that the bubble finally bursts.

Whenever the Federal Reserve starts raising rates, it always results in a bad ending.

This time will be no different, and anyone that is trying to convince you otherwise is just being delusional.