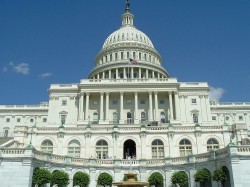 Are you ready for part two of the global financial collapse?  Many now fear that we may be on the verge of a repeat of 2008 after the events of the last several days.  On Friday, Standard & Poor’s stripped the U.S. government of its AAA credit rating for the first time in history.  World financial markets had been anticipating a potential downgrade, but that still didn’t stop panic from ensuing as this week began.  On Monday, the Dow Jones Industrial Average dropped 634.76 points, which represented a 5.5 percent plunge.  It was the largest one day point decline and the largest one day percentage decline since December 1, 2008.  Overall, stocks have fallen by about 15 percent over the past two weeks.  When Standard & Poor’s downgraded long-term U.S. government debt from AAA to AA+, it was just one more indication that faith in the U.S. financial system is faltering.  Previously, U.S. government debt had a AAA rating from S&P continuously since 1941, but now that streak is over.   Nobody is quite sure what comes next.  We truly are in unprecedented territory.  But one thing is for sure – there is a lot of fear in the air right now.

So exactly what caused S&P to downgrade U.S. government debt?

Well, it was the debt ceiling deal that broke the camel’s back.

According to S&P, the debt ceiling deal “falls short of what, in our view, would be necessary to stabilize the government’s medium-term debt dynamics.”

As I have written about previously, the debt ceiling deal was a complete and total joke, and S&P realized this.

Forget all of the huge figures that the mainstream media has been throwing at you concerning this debt ceiling deal.  The only numbers that matter are for what happens before the next election.

Even if all of those things remain the same, there is still a very good chance that we would see dramatic changes to the deal after the next election.

So in evaluating this “deal”, the important thing is to look at what is going to happen prior to the 2012 election.

When we examine this “deal” that way, what does it look like?

Well, Barack Obama and the Democrats get the debt ceiling raised by over 2 trillion dollars and will not have to worry about it again until after the 2012 election.

The Republicans get 25 billion dollars in “savings” from spending increases that will be cancelled.

The “Super Congress” that is supposed to be coming up with the second phase of the plan may propose some additional “spending cuts” that would go into effect before the 2012 election, but that seems unlikely.

So in the final analysis, the Democrats won the debt ceiling battle by a landslide.

25 billion dollars is not even 1 percent of the federal budget.  The U.S. national debt continues to spiral wildly out of control, and our politicians could not even cut the budget by one percent.

Somehow our politicians believed that the rest of the world would be convinced that they were serious about cutting the budget, but it turns out that global financial markets are tired of getting fooled.

Several smaller credit rating agencies have already significantly slashed the credit rating of the U.S. government.  But a lot of pressure had been put on the “big three” to keep them in line.

But now things have gotten so ridiculous that S&P felt forced to make a move.

Sadly, our politicians are still trying to maintain the charade that everything is okay.  Barack Obama says that financial markets “still believe our credit is AAA and the world’s investors agree”.

The truth is that the credit rating for the U.S. government should have been slashed significantly a long time ago.  This move by S&P was way, way overdue.

Moody’s might be the next one to issue a downgrade.  At the moment, Moody’s says that it will not be downgrading U.S. debt for now, but Moody’s also says that it has serious doubts about the enforceability of the “budget cuts” in the debt ceiling deal.

The following are 8 more reasons why you should be deeply concerned that the U.S. government has lost its AAA credit rating….

#1 The U.S. dollar and U.S. government debt are at the very heart of the global financial system.  This credit rating downgrade just doesn’t affect the United States – it literally shakes the financial foundations of the entire world.

#2 As the stock market crashes, investors are flocking to U.S. Treasuries right now.  However, once the current panic is over the U.S. could be faced with increased borrowing costs.  The credit rating downgrade is a signal to investors that they should be receiving a higher rate of return for investing in U.S. government debt.  If interest rates on U.S. government debt do end up going up, that is going to make it more expensive for the U.S. government to borrow money.  The higher interest on the national debt goes, the more difficult it is going to become to balance the budget.

#3 We could literally see hundreds of other credit rating downgrades now that long-term U.S. government debt has been downgraded.  For example, S&P has already slashed the credit ratings of Fannie Mae and Freddie Mac from AAA to AA+.  S&P has also already begun to downgrade the credit ratings of states and municipalities.  Nobody is quite sure when we are going to see the dominoes stop falling, and this is not going to be a good thing for the U.S. economy.

#5 The current financial panic caused by this downgrade is hitting financial stocks really hard.  The big banks led the decline back in 2008, and it looks like it might be happening again.  Just check out what CNN says happened to financial stocks on Monday….

#6 China is freaking out. China’s official news agency says that China “has every right now to demand the United States to address its structural debt problems and ensure the safety of China’s dollar assets”.  If China starts dumping U.S. government debt that would make things a lot worse.

#7 There are already calls for the Federal Reserve to step in and do something.  If the U.S. economy drops into another recession, will we see more quantitative easing?  It seems like we have reached a point where the Fed is constantly in “emergency mode”.

#8 The U.S. national debt continues to get worse by the day.  Just check out what economics professor Laurence J. Kotlikoff recently told NPR….

“If you add up all the promises that have been made for spending obligations, including defense expenditures, and you subtract all the taxes that we expect to collect, the difference is $211 trillion. That’s the fiscal gap”

Dick Cheney once said that “deficits don’t matter”, but the truth is that all of the debt we have been piling up for decades is now catching up with us.

The United States is in such a huge amount of financial trouble that it is hard to put into words.  The days of easy borrowing for the U.S government are starting to come to an end.  We have been living in the greatest debt bubble in the history of the world, and it has fueled a tremendous amount of “prosperity”, but now the party is ending.

A whole lot of financial pain is on the horizon.  Please prepare for the hard times that are coming.