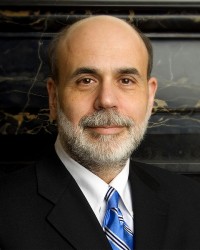 The Federal Reserve has saved the stock market!  Well, at least for a day.  That was one heck of a “dead cat bounce” that we saw on Tuesday.  Normally, after the kind of dramatic decline that we saw on Monday there is some sort of a rebound, but on Tuesday the market did not begin to soar until the Federal Reserve pledged to leave interest rates near zero until mid-2013.  Once the Fed made their announcement, the market went haywire.  At one point the Dow was down more than 200 points, but by the end of the day it was up 430 points.  It was a desperate move for the Federal Reserve to pledge not to raise interest rates for the next two years, and it has stabilized financial markets for the moment.  But what is the Fed going to do to save the stock market when it starts crashing next week or next month?  The underlying financial fundamentals continue to get worse and worse.  Europe is a mess, Japan is a mess and the United States is a mess.  The Federal Reserve can try to keep all of the balls in the air for as long as possible, but at some point the juggling act is going to end and the house of cards is going to come crashing down.

This move may calm nerves for a day or two, but there is still a tremendous amount of fear out there at the moment.  Many investors are pouring money into “safe havens” right now.  Huge amounts of cash are being poured into U.S. Treasuries and the price of gold is absolutely soaring.  The price of gold is up about $220 in just the last 30 days alone.

Yes, that is how wild things are becoming.  The Federal Reserve is painting itself into a corner.  Never before has the Fed pledged to leave interest rates near zero for the next two years.  The following is an excerpt from the statement that the Fed released earlier today….

To promote the ongoing economic recovery and to help ensure that inflation, over time, is at levels consistent with its mandate, the Committee decided today to keep the target range for the federal funds rate at 0 to 1/4 percent.  The Committee currently anticipates that economic conditions–including low rates of resource utilization and a subdued outlook for inflation over the medium run–are likely to warrant exceptionally low levels for the federal funds rate at least through mid-2013.  The Committee also will maintain its existing policy of reinvesting principal payments from its securities holdings.  The Committee will regularly review the size and composition of its securities holdings and is prepared to adjust those holdings as appropriate.

Brazil, Argentina, Korea, Indonesia are going to scream bloody murder over perpetual ZIRP. Russia is likely to get downright ugly with their rhetoric. I wouldn’t be surprised if they took this opportunity to vote with their feet and just abandon the dollar as a reserve holding. China will also make noise. They will make more calls for a new international currency to replace the dollar. The Central bankers in Japan and Switzerland are puking in the trashcan over this. Bernanke is exporting US deflation to them. Shame on the Fed for pursuing Beggar my neighbor policies. They deserve all the global criticism they are about to get.

The Federal Reserve is using up all of the ammunition it has available and the game has barely even begun.

Things are going to get a lot worse.  The U.S national debt continues to pile up at lightning speed.  The debt ceiling deal essentially does nothing to fix our debt problems.  Thousands of businesses and millions of jobs continue to leave the United States.  As a nation, we are constantly becoming poorer and we are constantly getting into more debt.

Meanwhile, Europe is on the verge of a financial meltdown and Japan has a “zombie economy” at this point.

Many fear that we could be on the verge of another major global recession.  The following is how a recent Der Spiegel article described the current global financial situation….

Many economists have been pointing out that last week’s panic resembled the fear that swept financial markets after the collapse of US investment bank Lehman Brothers in September 2008.

Then as now, banks stopped lending each money. Then as now, banks’ cash deposits at the central bank doubled within days. The European Central Bank reacted by assuring banks of unlimited liquidity in the coming months. It was an emergency measure that led to short-term relief but sparked anxious questions among bankers and stock market players. How long can the central bank keep up its market-soothing liquidity operations before it finally loses its credibility, the most important asset of a central bank? Is the financial crisis about to escalate?

In the old days, the U.S. and Europe could just borrow gigantic stacks of cash in order to solve any problems.  But now things are dramatically changing.

“The U.S. government has to come to terms with the painful fact that the good old days when it could just borrow its way out of messes of its own making are finally gone”

But at some point the rest of the world is not going to play along anymore.  When that moment arrives, it is going to be very interesting to see what happens.

Meanwhile, the U.S. economy continues to slowly unravel, and people in this country are getting very angry.  Millions of Americans families are barely scraping by right now.  Most Americans just want someone to “fix” things, but unfortunately there are no easy “fixes” to our financial problems.

As our economic problems grow even worse, frustration inside the United States is going to continue to escalate.  A brand new Rasmussen survey found that only 17 percent of Americans now believe that the U.S. government has the consent of the governed.

That was a brand new all-time low.

Faith in the major institutions of our society is already dangerously low and the economy is not even that bad yet.

As horrible as things are now, the truth is that this is rip-roaring prosperity compared to what is coming.

In the months and years ahead, America is going to be greatly tested.  As the recent London riots have shown, things can spiral out of control very quickly.

When the economy completely collapses will America be able to handle it?