Most people think of a cashless society as something that is way off in the distant future.  Unfortunately, that is simply not the case.  The truth is that a cashless society is much closer than most people would ever dare to imagine.  To a large degree, the transition to a cashless society is being done voluntarily.  Today, only 7 percent of all transactions in the United States are done with cash, and most of those transactions involve very small amounts of money.  Just think about it for a moment.  Where do you still use cash these days?  If you buy a burger or if you purchase something at a flea market you will still use cash, but for any mid-size or large transaction the vast majority of people out there will use another form of payment.  Our financial system is dramatically changing, and cash is rapidly becoming a thing of the past.  We live in a digital world, and national governments and big banks are both encouraging the move away from paper currency and coins.  But what would a cashless society mean for our future?  Are there any dangers to such a system?

Those are very important questions, but most of the time both sides of the issue are not presented in a balanced way in the mainstream media.  Instead, most mainstream news articles tend to trash cash and talk about how wonderful digital currency is.

For example, a recent CBS News article declared that soon we may not need “that raggedy dollar bill” any longer and that the “greenback may soon be a goner”….

It’s what the wallet was invented for, to carry cash. After all, there was a time when we needed cash everywhere we went, from filling stations to pay phones. Even the tooth fairy dealt only in cash.

But money isn’t just physical anymore. It’s not only the pennies in your piggy bank, or that raggedy dollar bill.

Money is also digital – it’s zeros and ones stored in a computer, prompting some economists to predict the old-fashioned greenback may soon be a goner.

“There will be a time – I don’t know when, I can’t give you a date – when physical money is just going to cease to exist,” said economist Robert Reich.

So will we see a completely cashless society in the near future?

Of course not.  It would be wildly unpopular for the governments of the world to force such a system upon us all at once.

Instead, the big banks and the governments of the industrialized world are doing all they can to get us to voluntarily transition to such a system.  Once 98 or 99 percent of all transactions do not involve cash, eliminating the remaining 1 or 2 percent will only seem natural.

The big banks want a cashless society because it is much more profitable for them.

The big banks earn billions of dollars in fees from debit cards and they make absolutely enormous profits from credit cards.

But when people use cash the big banks do not earn anything.

So obviously the big banks and the big credit card companies are big cheerleaders for a cashless society.

Most governments around the world are eager to transition to a cashless society as well for the following reasons….

-Cash is expensive to print, inspect, move, store and guard.

-Counterfeiting is always going to be a problem as long as paper currency exists.

-Cash if favored by criminals because it does not leave a paper trail.  Eliminating cash would make it much more difficult for drug dealers, prostitutes and other criminals to do business.

-Most of all, a cashless society would give governments more control.  Governments would be able to track virtually all transactions and would also be able to monitor tax compliance much more closely.

When you understand the factors listed above, it becomes easier to understand why the use of cash is increasingly becoming demonized.  Governments around the world are increasingly viewing the use of cash in a negative light.  In fact, according to the U.S. government paying with cash in some circumstances is now considered to be “suspicious activity” that needs to be reported to the authorities.

This disdain of cash has also grown very strong in the financial community.  The following is from a recent Slate article….

David Birch, a director at Consult Hyperion, a firm specializing in electronic payments, says a shift to digital currency would cut out these hidden costs. In Birch’s ideal world, paying with cash would be viewed like drunk driving—something we do with decreasing frequency as more and more people understand the negative social consequences. “We’re trying to use industrial age money to support commerce in a post-industrial age. It just doesn’t work,” he says. “Sooner or later, the tectonic plates shift and then, very quickly, you’ll find yourself in this new environment where if you ask somebody to pay you in cash, you’ll just assume that they’re a prostitute or a Somali pirate.”

Do you see what is happening?

Simply using cash is enough to get you branded as a potential criminal these days.

Many people are going to be scared away from using cash simply because of the stigma that is becoming attached to it.

This is a trend that is not just happening in the United States.  In fact, many other countries are further down the road toward a cashless society than we are.

Up in Canada, they are looking for ways to even eliminate coins so that people can use alternate forms of payment for all of their transactions….

The Royal Canadian Mint is also looking to the future with the MintChip, a new product that could become a digital replacement for coins.

In Sweden, only about 3 percent of all transactions still involve cash.  The following comes from a recent Washington Post article….

In most Swedish cities, public buses don’t accept cash; tickets are prepaid or purchased with a cell phone text message. A small but growing number of businesses only take cards, and some bank offices — which make money on electronic transactions — have stopped handling cash altogether.

“There are towns where it isn’t at all possible anymore to enter a bank and use cash,” complains Curt Persson, chairman of Sweden’s National Pensioners’ Organization.

In Italy, all very large cash transactions have been banned.  Previously, the limit for using cash in a transaction had been reduced to the equivalent of just a few thousand dollars.  But back in December, Prime Minister Mario Monti proposed a new limit of approximately $1,300 for cash transactions.

And that is how many governments will transition to a cashless society.  They will set a ceiling and then they will keep lowering it and lowering it.

But is a cashless society really secure?

Bank accounts can be hacked into.  Credit cards and debit cards can be stolen.  Identity theft all over the world is absolutely soaring.

So companies all over the planet are working feverishly to make all of these cashless systems much more secure.

In the future, it is inevitable that national governments and big financial institutions will want to have all of us transition over to using biometric identity systems in order to combat crime in the financial system.

Many of these biometric identity systems are becoming quite advanced.

For example, just check out what IBM has been developing.  The following is from a recent IBM press release….

You will no longer need to create, track or remember multiple passwords for various log-ins. Imagine you will be able to walk up to an ATM machine to securely withdraw money by simply speaking your name or looking into a tiny sensor that can recognize the unique patterns in the retina of your eye. Or by doing the same, you can check your account balance on your mobile phone or tablet.

Each person has a unique biological identity and behind all that is data. Biometric data – facial definitions, retinal scans and voice files – will be composited through software to build your DNA unique online password.

Referred to as multi-factor biometrics, smarter systems will be able to use this information in real-time to make sure whenever someone is attempting to access your information, it matches your unique biometric profile and the attempt is authorized.

In the future, if you do not surrender your biometric identity information, you may be locked out of the entire financial system.

Another method that can be used to make financial identification more secure is to use implantable RFID microchips.

Yes, there is a lot of resistance to this idea, but the fact is that the use of RFID chips in animals and in humans is rapidly spreading.

Some U.S. cities have already made it mandatory to implant microchips into all cats and all dogs so that they can be tracked.

All over the United States, employees are being required to carry badges that contain RFID chips, and in some instances employers are actually requiring employees to have RFID chips injected into their bodies.

In some countries, microchips are now actually being embedded into school uniforms to make sure that students don’t skip school.

Can you see where all of this is headed?

Some companies are even developing RFID technologies that do not require an injection.

One company called Somark has developed chipless RFID ink that is applied directly to the skin of an animal or a human.  These “RFID tattoos” are applied in about 10 seconds using micro-needles and a reusable applicator, and they can be read by an RFID reader from up to four feet away.

Would you get an “RFID tattoo” if the government or your bank asked you to?

Some people out there are actually quite excited about these new technologies.

For example, a columnist named Don Tennant wrote an article entitled “Chip Me – Please!” in which he expressed his unbridled enthusiasm for an implantable microchip which would contain all of his medical information….

“All I can say is I’d be the first person in line for an implant.”

But are there real dangers to going to a system that is entirely digital?

For example, what if a devastating EMP attack wiped out our electrical grid and most of our computers from coast to coast?

How would we continue to function?

Sadly, most people don’t think about things like that.

Our world is changing more rapidly than ever before, and we should be mindful of where these changes are taking us.

Just because our technology is advancing does not mean that our world is becoming a better place.

There are millions of Americans that want absolutely nothing to do with biometric identity systems or RFID implants.

But the mainstream media continues to declare that nothing can stop the changes that are coming.  A recent CBS News article made the following statement….

“Most agree a cashless society is not only inevitable, for most of us, it’s already here.”

Yes, a cashless society is coming.

Are you ready for it? 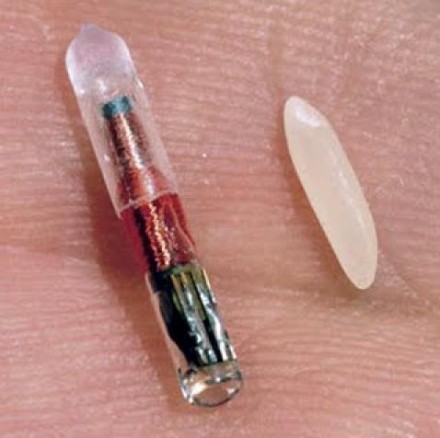