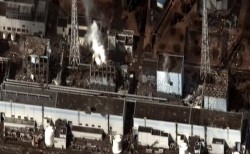 Global financial markets are in turmoil as the situation in Japan continues to deteriorate.  Stock markets are plunging all over the world as investors flock to investments that are considered to be safer.  The 9.0 earthquake and the unprecedented tsunami in Japan would have been more than enough to spook investors and unleash chaos on world financial markets, but now the unfolding nightmare at the Fukushima Dai-ichi nuclear facility is really starting to cause panic.  Right now there is a mass exodus out of the city of Tokyo.  But not everyone can leave the city.  There are over 30 million people living in and around Tokyo.  So where in the world could you possibly put 30 million refugees?  Sadly, the truth is that millions of Japanese are going to stay in Tokyo no matter how high the radiation gets.  Let us hope that Japanese authorities can get the situation at the Fukushima Dai-ichi nuclear facility under control, but the fact that they have resorted to dropping water from helicopters and shooting water cannons at these nuclear reactors is not comforting.

World financial markets are certainly not expressing a lot of confidence right now.  This week alone, $300 billion in U.S. stock values have been wiped out.  The Dow Jones industrial average lost about 2 percent of its total value on Wednesday.  The Nikkei 225 stock index has lost about 10 percent of its total value since the beginning of this crisis.  At one point it was down more than 16 percent, but a gigantic monetary injection from the Bank of Japan has helped to stabilize things at least for now.  There are also some that believe that the Japanese government is now directly buying up stocks to keep them from falling even further.

Stock markets across Europe have been plunging as well.  An article posted on the USA Today website described some of the carnage on Wednesday….

The financial ripples from this crisis are going to be felt for a long, long time.

In order to rebuild Japan, the Japanese government is somehow going to have to borrow massive amounts of money.  But the Japanese national debt was already projected to reach 228 percent of GDP this year.

The Japanese government has become an incredibly bad credit risk, but lowering their credit rating right now would seem to be in very bad taste.  So far, all three major credit rating agencies are taking a “wait and see” approach when it comes to Japan.

Unfortunately, the crisis in Japan is far from over.

The situation at the Fukushima Dai-ichi nuclear facility just seems to grow more dire with each passing day.  Right now, the primary concern is the 40 years of spent fuel rods that are stored throughout the complex.

Ed Lyman, a physicist at the Union of Concerned Scientists, recently explained why the pools that store the spent fuel rods are the biggest problem at this point….

“For the time being, the greatest concern is the spent fuel pools because there is a clear pathway for release of radioactivity from the pools into the environment.”

The phrase “spent fuel rods” may make it sound like they should no longer be a threat, but the truth is that these fuel rods remain extremely hot and extremely radioactive for years after they are done being used.  For some reason, someone thought that it would be a good idea to store these spent fuel rods in huge pools of water near the top of each of the nuclear reactor buildings at the Fukushima Dai-ichi complex.

These spent fuel rod pools are not housed in the same kind of containment vessels that the nuclear reactors are.  Therefore there is a much greater danger that radiation from these spent fuel rods could be released into the surrounding environment.

A recent article by Paul Joseph Watson did a great job of explaining just how big of a problem these spent fuel rods represent….

The Fukushima Daiichi plant has seven pools dedicated to spent fuel rods. These are located at the top of six reactor buildings – or were until explosions and fires ravaged the plant. On the ground level there is a common pool in a separate building that was critically damaged by the tsunami. Each reactor building pool holds 3,450 fuel rod assemblies and the common pool holds 6,291 fuel rod assemblies. Each assembly holds sixty-three fuel rods. In short, the Fukushima Daiichi plant contains over 600,000 spent fuel rods – a massive amount of radiation that will soon be released into the atmosphere.

Are you starting to grasp just how serious this all is?

It is absolutely critical that all of these spent fuel rods remain submerged in water.

Unfortunately, things don’t look good right now.  U.S. authorities today expressed their belief that the spent fuel rods in unit 4 are now exposed and that a great deal of radiation is being released.  In fact, Gregory Jaczko, the chairman of the Nuclear Regulatory Commission, stated during Congressional testimony today that he believes that an extremely high level of radiation is being released by exposed spent fuel rods at the Fukushima Dai-ichi nuclear facility at this point….

We believe that radiation levels are extremely high, which could possibly impact the ability to take corrective measures.

It would be hard to understate the courage of those that are working inside the Fukushima Dai-ichi nuclear facility right now. They all likely realize that they are all going to die very quickly. They are laying down their lives in an effort to save their countrymen. According to a recent report from CBS News these workers say that they are not afraid to die….

The official said that his friend told him that he was not afraid to die, that that was his job.

Would all of us respond the same way?

Even the media that are reporting on this disaster in Japan are starting to be affected by this radiation.  Lester Holt revealed this morning that his entire crew had tested positive for radiation after returning from an assignment.

Meanwhile, Barack Obama is acting as if all of this stuff going on in Japan is no big deal. In fact, as Keith Koffler recently observed, Obama seems to be really enjoying himself in the midst of this crisis….

This morning, as Japan’s nuclear crisis enters a potentially catastrophic phase, we are told that Obama is videotaping his NCAA tournament picks and that we’ll be able to tune into ESPN Wednesday to find out who he likes.

Saturday, he made his 61st outing to the golf course as president, and got back to the White House with just enough time for a quick shower before heading out to party with Washington’s elite journalists at the annual Gridiron Dinner.

If you are curious about Obama’s picks for the NCAA tourney, they are posted on the official White House website.

This weekend, the Obamas are headed down to Brazil. According to an article in Forbes, the Obama plan to do a good bit of sightseeing while they are there….

The Obama family will also take in the sights in Rio. A trip to Corcovado mountain, where the Christ the Redeemer statue stands (France gave us Lady Liberty, gave Brazil Jesus) is supposedly on the itinerary. What trip to Rio would be complete without it?

Isn’t it great to see Obama acting like a true leader in the midst of one of the greatest moments of crisis that the world has seen since World War 2?

What in the world is Obama possibly thinking?

One thing about a major crisis is that it reveals the true character of those affected by it.  Many are responding to this crisis in Japan with great acts of courage and heroism.

Others are not rising to the occasion.

Let us just hope and pray that the Japanese figure out a way to get the situation at the Fukushima Dai-ichi nuclear complex under control.  If a “worst case scenario” happens we could soon be facing an unprecedented nuclear nightmare.