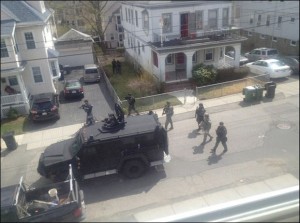 What in the world is happening to America?  Over the past couple of decades, the federal government has used just about every major national tragedy as an excuse to take even more liberty and freedom away from us.  And without a doubt, the Boston Marathon bombing was a great national tragedy.  I don’t think that any of us will forget the images that we have seen over the past week.  All of those responsible for this attack should be exposed, hunted down, tried and punished.  Unfortunately, what always seems to happen is that it is the American people that seem to get punished the most for these tragedies.  Over the past couple of decades we have been told again and again that if we will just give up a little bit more freedom that the authorities will be able to keep us safe.  But you know what?  It is IMPOSSIBLE for them to keep us safe.  There is no way in the world that the federal government can protect us from all of the bad guys in the world.  We are a country that is absolutely teeming with “soft targets” – malls, churches, schools, concerts, sporting events, etc.  No matter how much money we spend, there is no way that the federal government will ever be able to provide enough security for all of those soft targets.  Even if our society morphed into something that resembled George Orwell’s “1984”, the government would still never be able to guarantee our safety.  Unfortunately, in the aftermath of this attack there will inevitably be calls for “increased security” and “more anti-terror legislation”.  The answer always seems to be to expand the emerging police state.  But it is getting to the point where all of this “security” is becoming absolutely suffocating, and yet it doesn’t seem to be keeping us any safer.  So where does all of this end?  Are we going to completely throw out the entire U.S. Constitution in a desperate attempt to feel a little bit safer?  Or are we going to choose to live our lives without fear no matter what others may try to do to us?

“Those who would give up Essential Liberty to purchase a little Temporary Safety, deserve neither Liberty nor Safety.”

So who is really winning?

We seem to have forgotten some of the most basic lessons in life.

If you cower in fear when a bully comes after you, what is the bully going to do?

The bully is just going to keep coming after you because his actions are being rewarded.

Those that are trying to create fear love it when you become fearful.  It is exactly what they want.

The appropriate response to a great national tragedy is to reject fear and to continue to boldly live our lives as if nobody could ever shake us.

But instead, the atmosphere of fear in America continues to grow.

And yes, there are common sense things that our government should be doing to keep bad guys away from us.

Until the federal government secures our borders, they should not ask any of us to sacrifice a single ounce of liberty or freedom in the name of “national security”.

But even as the Obama administration treats our border security like a joke and continues to import huge numbers of people from radical areas of the Middle East, they continue to tell us that “domestic terror” is the next great threat that we are facing.

Many of our other politicians are buying into this philosophy as well.  Senator Lindsey Graham says that the attack in Boston is a perfect example of “why the homeland is the battlefield“.

So if “the homeland is the battlefield”, then who is the enemy?

Are the American people rapidly becoming the enemy?

Will we be constantly scared to death of one another?

Will the entire nation exist in a never ending environment of fear?

Will we eventually have the TSA and the Department of Homeland Security patrolling every mall, every church, every school, every concert and every sporting event?

Unfortunately, the bad guys will always be able to find a soft target, and there will be more terror attacks in the future no matter how much security we pour on.  Once upon a time this nation was greatly blessed with peace and security, but now that hedge of protection is gone.  The federal government could give the Department of Homeland Security trillions of dollars a year and it would not make much of a difference.  We live in a world that is becoming increasingly unstable, and bad guys are going to do bad things.

Yes, there are some common sense things that we can do to make our nation more secure.  At this point, the federal government is not doing most of those things.

But no matter how hard we try, bad things are going to happen.  When those bad things happen, what we can control is how we respond to them.

That is why what just happened in Boston is so alarming.  The entire city was put into a complete lockdown for nearly two days.  It was a preview of what could happen nationwide if martial law was declared.  It was an over the top display of force that clearly demonstrated to the rest of the world how incredibly frightened we are.

Some of the things we saw in Boston were absolutely disgraceful.  For example, you can see video of an innocent Watertown family being ripped out of their home at gunpoint right here.

Do you know what this tells the rest of the world?

It tells them that terrorism works.

It tells them that one small incident is enough to send the entire nation into a full-blown panic attack.

You can see some more photos of martial law in Boston right here.  Instead of making things better, this is just going to make the atmosphere of fear in this nation even worse.

And you know what?  None of those heavily armed men even found the second suspect.  He was actually found by a neighbor that had gone out to take a smoke.

Like most Americans, I absolutely hate terrorism in all the forms that it takes.

But we are not going to prevent future terrorism by treating the U.S. Constitution like a piece of trash.  We have now shown the world that we are willing to throw out our most important constitutional rights the moment that a “threat” arises, and this is just going to encourage even more terrorism.

Is there anyone out there that can defend what we just saw in Boston?  I can’t imagine any American that still loves the Constitution being proud of what just happened.  I think that Karl Denninger put it quite eloquently the other day…

By effectively occupying a part of the Boston metro area they made an utter mockery of the 4th Amendment. There was no “hot pursuit” and thus no argument available to them allowing searches of private property without consent or a warrant. Not only did they search without a warrant there were multiple reports through the day of seizure of firearms, among other things.

Sadly, most Americans seem to be more than willing to disregard the U.S. Constitution these days.  Most of them are incredibly scared and they just want someone in a position of authority to assure them that they will be safe.

So I am sure that in the months ahead we will see “security” get even tighter in this country.  With each subsequent tragedy, it will just get tighter and tighter until we can barely even breathe.

This is not the answer to any of our problems.  In fact, it is just going to make many of the problems that we are facing as a nation far worse.