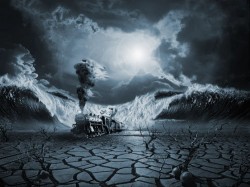 Will global financial markets reach a breaking point during the month of October?  Right now there are all kinds of signs that the financial world is about to experience a nervous breakdown.  Massive amounts of investor money is being pulled out of the stock market and mammoth bets are being made against the S&P 500 in October.  The European debt crisis continues to grow even worse and weird financial moves are being made all over the globe.  Does all of this unusual activity indicate that something big is about to happen?  Let’s hope not.  But historically, the biggest stock market crashes have tended to happen in the fall.  So are we on the verge of a “Black October”?

The following are 21 signs that something big is about to happen in the financial world and that global financial markets are on the verge of a nervous breakdown….

#2 Investors are pulling a huge amount of money out of stocks right now.  Do they know something that we don’t?  The following is from a report in the Financial Post….

#3 Siemens has pulled more than half a billion euros out of two major French banks and has moved that money to the European Central Bank.  Do they know something or are they just getting nervous?

#4 On Monday, Standard & Poor’s cut Italy’s credit rating from A+ to A.

#5 The European Central Bank is purchasing even more Italian and Spanish bonds in an attempt to cool down the burgeoning financial crisis in Europe.

#6 The Federal Reserve, the European Central Bank, the Bank of England, the Bank of Japan and the Swiss National Bank have announced that they are going to make available an “unlimited” amount of money to European commercial banks in October, November and December.

#8 Angela Merkel’s coalition is getting embarrassed in local elections in Germany.  A recent poll found that an astounding 82 percent of all Germans believe that her government is doing a bad job of handling the crisis in Greece.  Right now, public opinion in Germany is very negative toward the bailouts, and that is really bad news for Greece.

#9 Greece is experiencing a full-blown economic collapse at this point.  Just consider the following statistics from a recent editorial in the Guardian….

Consider first the scale of the crisis. After contracting in 2009 and 2010, GDP fell by a further 7.3% in the second quarter of 2011. Unemployment is approaching 900,000 and is projected to exceed 1.2 million, in a population of 11 million. These are figures reminiscent of the Great Depression of the 1930s.

#12 Greek Deputy Finance Minister Filippos Sachinidis says that Greece only has enough cash to continue operating until next month.

#13 Italy now has a debt to GDP ratio of about 120% and their economy is far, far larger than the economy of Greece.

#14 The yield on 2 year Portuguese bonds is now over 17 percent.  A year ago the yield on those bonds was about 4 percent.

#15 China seems to be concerned about the stability of European banks.  The following is from a recent Reuters report….

#16 European central banks are now buying more gold than they are selling.  This is the first time that has happened in more than 20 years.

#17 The chief economist at the IMF says that the global economy has entered a “dangerous new phase“.

#19 World financial markets are expecting that the Federal Reserve will announce a new bond-buying plan this week that will be designed to push long-term interest rates lower.

#20 If some wealthy investors believe that the Obama tax plan has a chance of getting through Congress, they may start dumping stocks before the end of this year in order to avoid getting taxed at a much higher rate in 2012.

#21 According to a study that was recently released by Merrill Lynch, the U.S. economy has an 80% chance of going into another recession.

When financial markets get really jumpy like this, all it takes is one really big spark to set the dominoes in motion.

Hopefully nothing really big will happen in October.

Hopefully global financial markets will not experience a nervous breakdown.

But right now things look a little bit more like 2008 every single day.

None of the problems that caused the financial crisis of 2008 have been fixed, and the world financial system is more vulnerable today than it ever has been since the end of World War II.

As I wrote about yesterday, the U.S. economy has never really recovered from the last financial crisis.

If we see another major financial crash in the coming months, the consequences would be absolutely devastating.

We have been softened up and we are ready for the knockout blow.

Let’s just hope that the financial world can keep it together.