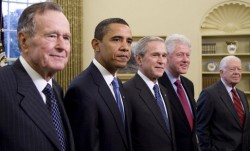 In the United States today, we are being taxed into oblivion, yet it is being done so stealthily that most Americans don’t even realize what is happening.  Most people are fixated on federal income tax rates, but the federal income tax is only one of the dozens of different taxes that each of us pay each year.  The politicians have learned that people get really upset when income tax rates are raised, so they have found hundreds of other ways to raise taxes on us.  What most taxpayers in the United States today are facing is “death by a thousand cuts”.  When you add up all forms of taxation from all levels of government, approximately 40 percent of all the income in the country is taken in as taxes by government.  Large numbers of Americans end up paying well over 50 percent of their income in taxes, and many of them don’t even realize that it is happening.  We truly are being taxed into oblivion, and yet the politicians just keep coming back for more.

On all levels, government just keeps growing, and all of this government has got to be paid for somehow.  Politicians have become masters at finding ways to tax us so that we won’t even feel it.  They have an endless hunger to spend more money, and they depend on us to feed that addiction.  Today, the combination of federal government spending, state government spending and local government spending now accounts for a larger share of U.S. GDP than at any other time in our history.

Yes, federal income tax rates were significantly higher 30 or 40 years ago.  But virtually every other tax you can think of has gone way up since then or did not exist back then.

Federal income taxes definitely still hurt, but the reality is that where we really get hit is in all of the other taxes that we pay.  American families pay Social Security taxes, Medicare taxes, state income taxes, sales taxes, property taxes, death taxes, various excise taxes, gasoline taxes, tire taxes, utility taxes, liquor taxes, telephone taxes and cigarette taxes just to name a few.  The truth is that there are dozens and dozens of different taxes that most Americans pay each year, and there are a whole bunch of others that get passed on to us through businesses that we deal with.

Speaking of cigarette taxes, there is legislation in Congress right now that would send taxes on tobacco products absolutely skyrocketing yet again.

I don’t smoke and I never will smoke, but I find the attack on smokers by our politicians to be seriously offensive.  If smoking is legal, then leave them alone.  Don’t tax them into oblivion just because you don’t like what they are doing.

An excerpt from S. 1403 (The IDEA Full Funding Act) is posted below.  You will notice that a portion of this legislation even refers to itself as the “Saving Lives by Lowering Tobacco Use Act”.  They are openly admitting that they want to make tobacco so expensive that people cannot afford to use it….

(a) Short Title- This section may be cited as the ‘Saving Lives by Lowering Tobacco Use Act’.

(b) Increase in Excise Tax on Small Cigars and Cigarettes-

(e) Clarification of Definition of Cigarette- Paragraph (2) of section 5702(b) of the Internal Revenue Code of 1986 is amended by inserting before the final period the following: ‘, which includes any roll for smoking containing tobacco that weighs no more than four and a half pounds per thousand, unless it is wrapped in whole tobacco leaf and does not have a cellulose acetate or other cigarette-style filter’.

(C) by adding at the end the following:

You can view the full text of this legislation right here.  Please notice that some of the tax increases are absolutely mind blowing.  For example, the tax rate on pipe tobacco is going from 2.8311 cents to $49.55.

Now that is a tax increase you can really sink your teeth into.

We are seeing “quiet” tax increases like this happen on every level of government all over the United States.

Of course I haven’t even mentioned all of the fines and fees and “registration” charges that state and local governments are hitting us with.

Have you gone to renew your car registration lately?  In some states (such as California) the fees have gotten absolutely ridiculous.

Speaking of California, it looks like they are getting ready to target cellphone users once again.

According to USA Today, California is getting ready to seriously jack up the fines for talking on a cellphone while driving….

The state Senate has sent a bill to Gov. Edmund G. Brown Jr. raising the basic fine for a first automotive offense from $20 to $50, the Sacramento Bee reports. For subsequent offenses, the fine would rise from $50 to $100. That’s not the worst of it: by the time state and local assessments are added on, the total for a first offense rises to between $208 to $328. For additional tickets, make that $328 to $528.

Yes, talking on a cellphone while driving is dangerous.  But hitting people with tickets of $300, $400 or even $500 is not about safety.  It is all about revenue generation.

Right now we are seeing an epidemic of speed traps all over the country.  State and local governments are desperate for money, and they see speeders as an easy source of revenue. You can read more about this phenomenon right here.

Speaking of “revenue”, that seems to have become Barack Obama’s new favorite word lately.  He seems absolutely obsessed with raising more money for the federal government.  The Obamacare law was absolutely packed to the gills with new taxes, but now he wants even more.

Yes, it is true that the wealthy are getting away with murder under our current tax system.  I find it highly offensive that many people that make millions of dollars each year are able to find ways to pay much, much smaller percentages of their incomes in taxes than I do.

But raising tax rates isn’t going to solve the problem.  Those that are masters at avoiding taxes are going to continue to do so.  Meanwhile, middle class Americans and small businesses will continue to get bled to death.

Our current tax system is fundamentally broken and needs to be completely thrown out and replaced.

However, no system is going to work until the federal government gets a handle on its spending addiction.

In the past couple of years, spending by the federal government as a share of GDP has been the highest that it has been since World War II.

You would think that there should be plenty of fat to trim, but as the recent debt ceiling deal clearly demonstrated, our politicians do not intend to significantly reduce government spending.

They are just going to keep borrowing, spending and finding more ways to tax us.

All of this nonsense in Washington D.C. is part of the reason why Americans are so displeased with Congress at this point.  According to Gallup, 84 percent of Americans now disapprove of the way Congress is doing its job, which is a brand new all-time high.

The truth is that sending more money to Washington D.C. is not going to “fix” things.

The federal government has multiplied in size over the past several decades, and yet the number of poor people just continues to increase.

Giving the poor more handouts may ease their suffering for a little while, but it is not the solution to their problems.  What they really need are good jobs, but our politicians have very busy setting up unfair trade agreements that allow millions of our jobs to be shipped overseas, and they continue to suffocate businesses in this country with mountains of ridiculous regulations.

No, the people that truly benefit when more money flows to the federal government are the fatcats that live and work around Washington D.C.

The past few decades have been a bonanza for government contractors, lobbyists and lawyers in the D.C. area.

According to the Washington Post, those living in the Washington D.C. metropolitan area now have a higher median household income than anyone else in the country….

There is a ton of money in the D.C. area.  I know.  I used to work there.  Approximately one third of the GDP of the region comes from spending by the federal government.  Even during this recent economic downturn, the Washington D.C. region continues to do really, really well.

So, no, raising taxes is not going to fix what ails us.  It would just feed the monster that we have created in Washington.

We are already being taxed into oblivion.  Middle class America can’t take much more of this.

We need to change our entire approach to taxation in this country, because right now our tax system is fundamentally unfair and it is not working.

So what do all of you think about our tax system?  Please feel free to post a comment with your opinion below….