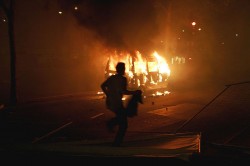 Will the most divisive campaign in modern American history culminate in massive riots in our major cities?  Right now, supporters of Barack Obama and supporters of Mitt Romney are both pinning all of their hopes on a victory on November 6th.  The race for the presidency is extremely tight, and obviously the side that loses is going to be extremely disappointed when the election results are finalized.  But could this actually lead to violence?  Could we actually see rioting in communities all over America?  Well, the conditions are certainly ripe for it.  A whole host of surveys over the past few years have shown that Americans are very angry and very frustrated right now.  In fact, a Pew Research Center poll from late last year found that 86 percent of all Americans are either angry or frustrated with the federal government.  We have seen this frustration manifest in protest movements such as the Tea Party and Occupy Wall Street, but right now things are fairly calm as liberals and conservatives both look forward to November 6th.  Many Republicans started the countdown to the next election literally the day after John McCain lost back in 2008.  All of their hopes of getting Obama out of the White House are riding on a Romney victory.  For many Democrats, Barack Obama is a “once in a generation” icon.  Just the thought of Mitt Romney replacing Obama in the White House is enough to push many of them to the brink of insanity.  In recent years we have seen horrible rioting erupt in cities after major sports championship games.  How much worse could the rioting potentially be if this bitterly contested election is decided by a very narrow margin – especially if there are allegations that the election is “stolen”?

The election is nearly four weeks away, and many Obama supporters are already threatening to riot if Obama loses.  The following are some very disturbing messages that were posted on Twitter recently that have been reposted on Twitchy.com….

“I Hope The USA Is Well Aware That If In The Event This Character Romney Wins The Election, The People Will Start A Country Wide Riot! #Power”

“If Romney wins. (which i highly doubt) THERE WILL BE A RIOT—”

The following are a few more tweets that I found which threaten a potential riot if Obama loses the election….

“Need 2 come up wit a game plan if Romney win…. Riot all thru Newark”

“I swear on everything I love if Romney wins ima riot. I don’t even care if its just me.”

Romney supporters are not really threatening to riot, but many of them are proclaiming that they may leave the country if Obama wins.  Here are some examples….

“If Obama gets reelected I may leave the country”

“im sorry but if obama were to win again, i might as well leave the country and live in zimbabwe”

This presidential campaign has been getting increasingly heated, and individuals on both sides have been committing some despicable acts.

For example, in a previous article I mentioned that some Romney campaign signs down in Virgina have been smeared with excrement.

Over in Ohio, a huge pile of manure was dumped right in front of Warren County Democratic headquarters early on Tuesday morning….

Volunteers at the Warren County Democratic headquarters, just north of Cincinnati, were shocked and disappointed by a political prank unloaded on them early Tuesday morning – someone dumped a pile of horse manure in the parking lot of the headquarters building on US 42, just north of Lebanon.

It appears that both sides have resorted to literally slinging crap around.

There is so much hate in America today, and this campaign is bringing a lot of it to the surface.  It is even being reported that a bus driver told a 12-year-old boy that he should have been aborted because his family has a Romney campaign sign in their yard….

Belling read a letter from the 12-year-old boy’s mother, detailing the alleged abusive behavior by the bus driver.

Apparently, the Romney-Ryan yard sign bugs the bus driver and she’s been harassing the boy, making rude comments to him related to politics.

When the driver engaged the 12-year-old boy in a political conservation, he responded by saying that Obama is pro-abortion.

The bus driver allegedly said to the child, “Maybe your mom should have chosen abortion for you.”

How sick is that?

Right now, the United States is a bubbling cauldron of frustration and anger that could be set off at any moment.  This election could potentially be a “trigger point” which could end up unleashing a lot of that anger and frustration.

Already, there have been allegations that the Republicans have been committing voter registration fraud.  Democrats are furious about this.

Evidence has also emerged that Democrats have been willing to assist voters in registering to vote in two different states.  The following is from a recent article by Mac Slavo….

When undercover reporters visited various locations across the country they received the same response from Obama campaign staffers – that it’s basically okay to vote multiple times if you happen to be registered in two or more states.

In Houston, Texas, for example, the Project Veritas reporter made her intentions known, and rather than being rebuffed for her planned illegal activity, she was provided assistance with obtaining the proper forms to be registered in two states and was told to say “I don’t know” if the double-voting ever became an issue.

It appears quite probable that whichever side loses this election will accuse the other side of stealing the election.

And if millions of Americans feel that the election has been stolen from them, that will make it much more likely that we will see rioting.

Keep your ears open for phrases such as “voter fraud” and “election fraud” following this election.  People are so angry already that even allegations that someone stole the election could be enough to set the streets of America on fire.

As always, let us hope for the best, but let us also prepare for the worst. 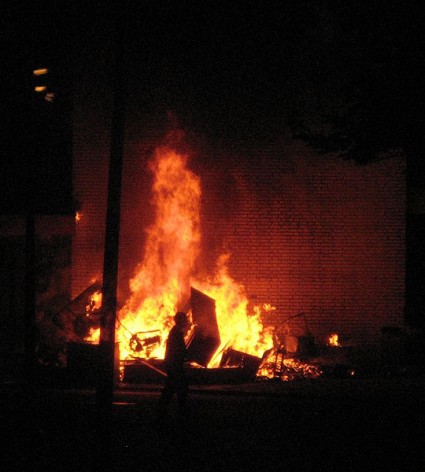