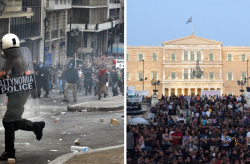 The United States is not the only one with massive economic problems right now.  The truth is that just about wherever you look around the globe things are getting even worse.  China is experiencing a substantial economic slowdown, and Japan has resorted to yet another round of money printing in an effort to keep the Japanese economy moving.  Unemployment in Europe continues to get even worse, and the riots this week in Spain and in Greece have been absolutely frightening at times.  In the United States there are a whole host of signs that another recession is approaching, and the number of American CEOs that say that they plan to eliminate jobs in the coming months is rapidly rising.  The world economy is more interconnected today than ever before, and that means that we are all in this together.  Just remember what happened back in 2008 and 2009.  The economic pain that started on Wall Street was felt in every corner of the planet.  So anyone that believes that the United States (or any other major nation for that matter) is going to escape the next wave of the economic crisis is simply not being realistic.  Why do you think central banks all over the world are in “panic mode” right now?  They are firing all of their ammunition and printing money like there is no tomorrow in an attempt to keep the system together.  Unfortunately, it is not going to work.

If the powers that be had an “easy button” that would quickly fix everything, they would have pressed it by now.  But despite all of their efforts things continue to unravel.  If you want to get an idea of where we are headed,  just look at what is already happening in Europe.   Unemployment has risen above 24 percent in Greece and above 25 percent in Spain.

Those two nations are on the “bleeding edge” of the next wave of economic problems.  Unemployment is rising almost everywhere else in Europe as well, and things are eventually going to get really bad in Asia and in North America too.

So hold on to your seat belts – it is going to be a bumpy ride.

The following are 14 signs from around the globe that the world economy is getting weaker….

#1 Things in China do not look good right now.  The Shanghai Composite index fell to its lowest point in over 3 years earlier this week.  Will the S&P 500 soon follow suit?

#2 The Bank of Japan has resorted to yet another round of money printing in a desperate attempt to try to bolster the faltering Japanese economy….

In Asia, the Bank of Japan has long been manufacturing money out of thin air. It has just announced an eighth round of money printing to prop up the ailing Japanese economy. The Bank of Japan is to purchase 10 trillion yen of bonds to add further liquidity into the financial system. Now it has 80 trillion yen of bonds in its portfolio, equivalent to 20 per cent of Japan’s gross domestic product.

#3 In Spain, violent demonstrations over the state of the Spanish economy just outside the national Parliament building in Madrid on Tuesday evening made headlines all over the globe.  You can view video of police brutally beating young Spanish protesters during those demonstrations right here.

#4 As unemployment hovers around the 25 percent mark, foraging through garbage bins for food has become so rampant in Spain that one city has actually started putting locks on supermarket garbage bins “as a public health precaution“.

#5 Despite all of the money printing that the ECB has been doing, the yield on 10 year Spanish bonds has risen back up to about 6 percent again.

#6 The economic protests in Greece are getting completely and totally out of control.  Just check out this description of the “Day of Rage” that took place in Greece earlier this week….

Police fired stun grenades and tear gas at protesters yesterday as tens of thousands poured into the streets of Athens as part of a nationwide strike to challenge a new round of austerity measures that are expected to cut wages, pensions and healthcare once again.

Dozens of youths, some masking their faces with helmets and T-shirts, hurled Molotov cocktails and rocks at police who fired back in an effort to scatter the angry crowds around the parliament building. More than 50,000 people are believed to have participated in the mass walk-out in Athens alone.

#7 The unemployment rate in France has risen for 16 months in a row and is now the highest that it has been in over a decade.

#8 As I wrote about recently, the number of unemployed workers in Italy has increased by more than 37 percent over the past year.

#9 New orders for durable goods in the United States fell by a whopping 13.2 percent in August.  That was the largest decline that we have seen since the middle of the last recession (January 2009).

#11 The U.S. Postal Service is about to experience its second financial default in just the past two months….

The U.S. Postal Service will default this week on a $5.6 billion congressionally mandated obligation to pre-fund retiree health benefits, marking the second time in two months the cash-strapped agency has done this.

#12 It looks like General Motors is on a path that will lead to bankruptcy (again).

#13 According to a recent survey conducted by State Street Global Advisors, 71 percent of “investors in a survey of 300 around the world, including the largest pension funds, asset managers and private banks, fear an imminent Lehman-like event.”

#14 According to a recent survey of American CEOs by Business Roundtable, the number of CEOs that plan to eliminate jobs has risen significantly from earlier this year….

The CEOs’ decline in confidence comes alongside a worsening employment outlook. Thirty-four percent of the 138 CEOs surveyed said in this quarter’s survey that they expected their companies to cut jobs in the next six months, compared to just 20 percent in the second quarter. Likewise, only 29 percent say they expect employment to grow in the next half year, down from 36 percent last quarter.

But the mainstream media in the United States would like us to believe that everything is getting better.

The mainstream media would like us to believe that QE3 is going to stimulate lots of new hiring all over America, and they are greatly celebrating the fact that the S&P 500 hit a five year high on Thursday.

Well, those on Wall Street should celebrate this monetary “sugar high” while they still can.  Of course QE3 was going to cause stock prices to rise in the short-term, but the reality of the matter is that QE3 is not going to do a thing to stop the financial markets from crashing when the time comes for them to crash.

Economies tend to flourish in a stable, predictable environment.  When you start recklessly printing money, it may help your economic numbers in the short-term, but it disrupts the stability of the system.

And once you have created a tremendous amount of instability, it is really, really hard to convince people that you can create stability once again.

When it comes to economics, confidence is one of the most important ingredients.  If people lose confidence in the system, it almost does not matter what else you do.

As I wrote about the other day, quantitative easing worked for the Weimar Republic for a little while, but in the end it resulted in total disaster.

It will also end in total disaster for us.

All over the globe financial authorities are playing all sorts of games in an attempt to keep the system functioning smoothly.  But these games are going to steadily undermine confidence in the system, and that is going to prove to be absolutely deadly.

Take advantage of this period of relative stability while you still can, because when it is gone it is not coming back. 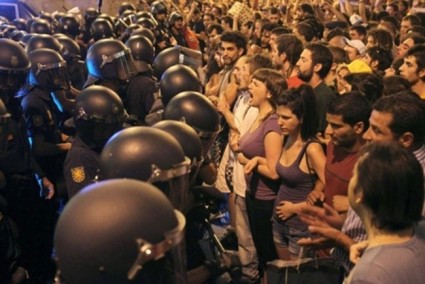