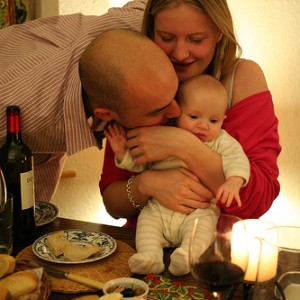 When I was growing up, $50,000 sounded like a gigantic mountain of money to me.  And it was actually a very significant amount of money in those days.  But in 2010 it just does not go that far.  Today, the median household income in the United States for a year is approximately $50,000.  About half of all American households make more than that, and about half of all American households make less than that.  So if your family brings in $50,000 this year that would put you about right in the middle.  So can a family of four survive on $50,000 in America today?  The answer might surprise you.  Twenty years ago a middle class American family of four would have been doing quite well on $50,000 per year.  But things have changed.

First of all, the family of four needs some place to live.  Even though house prices have come down a bit recently, they are still quite expensive compared to a decade ago.  Let’s assume that our family of four has found a great deal and is only spending $1000 a month on rent or on a mortgage payment.  In many of the larger U.S. cities this is a completely unrealistic number, but let’s go with it for now.

Next, our family of four has to pay for power and water for their home.  This amount can vary dramatically depending on the climate, but let’s assume that the average utility bill is somewhere around $300 a month.

Our family is also going to need phone and Internet service.  Cell phone bills for a family of four can balloon to ridiculous proportions, but let’s assume that our family of four is extremely budget conscious and has found a package where they can get basic phone service, Internet and cable for $100 a month.  Most middle class American families spend far more than that.

Both parents are also going to need cars to get to work.  Let’s assume that both cars were purchased used, so the car payments will only total about $400 a month.  If the vehicles were purchased new this number could potentially be much higher.

If our family has two cars that means that they will also be paying for automobile insurance.  Let’s assume that they both have exemplary driving records and so they are only spending about $100 a month on car insurance.

Our hypothetical family is also going to have to eat.  Let’s assume that our family clips coupons and cuts corners any way that it can and only spends about $50 for each member of the family on food and toiletries each week.  That works out to a total of $800 a month for the entire family.

Lastly, the parents are also going to need to buy gas to get to and from work each week.  Let’s assume that they don’t live too far from work and only need to fill up both cars about once per week.  That would give them a gasoline bill of about $50 a week or $200 a month.  Of course if either of them lived a good distance from work or if a lot of extra driving was required for other reasons this expense could be far, far higher.

We haven’t taken federal, state and local taxes out of the paycheck yet.  Depending on where our family lives, this will be at least $1000 a month.

But to this point we have assumed that our family does not have any credit card debt or student loan debt at all.  If they do, those payments will have to be made as well.

It is getting really, really hard out there for middle class American families these days.

And unfortunately, many American families now have at least one parent that is not working.  In some areas of the nation it just seems like there are virtually no jobs available.  For example, at 14.3%, the state of Nevada now has the highest unemployment rate in the nation.  Michigan (which had been number one) is not very far behind.

But even those Americans who are able to find work are finding themselves increasingly squeezed.  For many Americans, a new job means much lower pay.  Millions of highly educated people who once worked in professional positions now find themselves working in retail positions or in the food service industry.  Many are hoping that the economy will “turn around” soon and that they will be able to go back to higher paying jobs, but the truth is that the U.S. economy is simply not producing enough good jobs for everyone any longer.

So where did all the good jobs go?  Well, millions of them have been shipped off to China, India and dozens of other nations around the globe.  Today the United States spends approximately $3.90 on Chinese goods for every $1 that China spends on goods from the United States.  A Chinese factory worker makes about a tenth of what an American factory worker makes.  And China continues to keep their currency artificially low so that jobs will continue to flow into China and so that we will continue to run a massive trade imbalance with them.

In a previous article, “Winners And Losers“, I went into much greater detail about how globalism is destroying middle class jobs.  We are rapidly moving toward an America where there will be a small group of “haves” and a very large group of “have nots”.

So what do you think?  Do you think that a family of four can make it on a middle class income in America today?  Feel free to leave a comment with your thoughts….