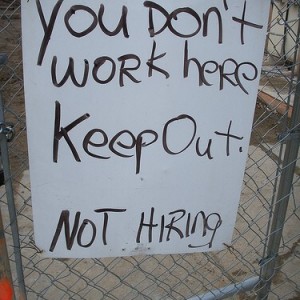 So what could this mean?

It could mean that large numbers of Americans may soon be forced into bankruptcy.

It could mean that large numbers of Americans may soon lose their homes.

It could mean that large numbers of Americans may soon be devastated by medical bills they simply cannot pay.

It could mean that large numbers of Americans may soon be forced to live in the streets.

But should we expect the federal government to pay long-term unemployment benefits for all unemployed Americans indefinitely?

That gets really expensive very quickly.  Considering the fact that the U.S. national debt is growing exponentially, the U.S. government cannot really afford to be throwing around cash as if it was water.

But with millions upon millions of Americans completely broke and unable to find jobs, what else can you do?

The reality is that it is extremely likely that the U.S. Congress will find a way to come to an agreement to extend these benefits at some point in the coming days.

So total catastrophe is likely to be avoided.

At least for now.

Meanwhile, the Federal Reserve’s $1.25 trillion program to push down mortgage rates is scheduled to expire on March 31st.

So what is that going to mean?

It is going to mean that mortgage rates are going to start to rise.

That is not good news for the housing market.

Even now, sales of previously owned homes plunged in January to their lowest level since last summer.

So what is going to happen when mortgage rates start to rise?

The reality is that the U.S. housing market is simply not going to recover to previous levels.  In fact, all signs point to another major housing market disaster in the years ahead.

The big banks are hoarding cash and have reduced lending.

Another massive wave of adjustable rate mortgages is scheduled to reset between 2010 and 2012 which will force another gigantic pile of foreclosures on to the market.

So where in the world is the “housing recovery” going to come from?

There are going to be many more houses for sale and many fewer qualified buyers.

It does not take an economic genius to figure out what that is going to do to housing prices.

Hopefully the U.S. government and the financial powers that be can figure out a way to stabilize things for a while.

But there is no getting around the fact that the U.S. is headed for an economic collapse.

By borrowing gigantic piles of cash the U.S. government can put the pain off for a little while, but by doing so they make the eventual collapse much worse.

So what do you think?  Feel free to leave a comment with your opinion…