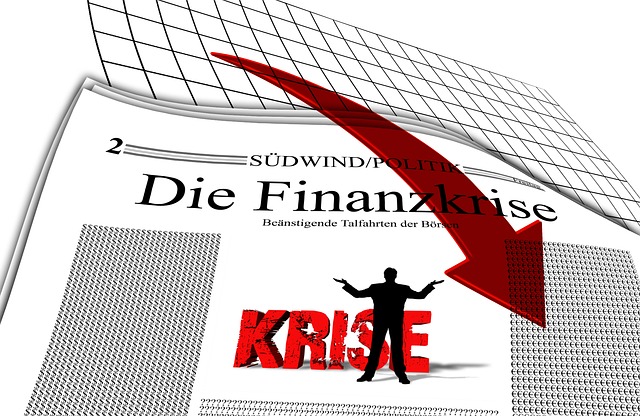 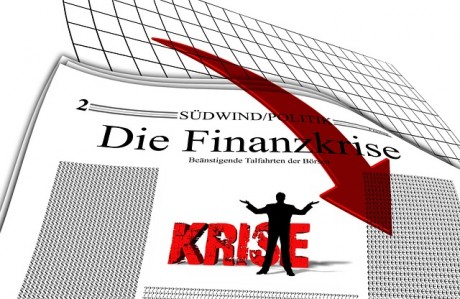 A global stock market crash has begun.  European stocks are crashing, Chinese stocks are crashing, and commodities are crashing.  And guess what?  All of those things happened before U.S. stocks crashed in the fall of 2008 too.  In so many ways, it seems like we are watching a replay of the financial crisis of 2008, but this time around the world is in far worse shape financially.  Global debt levels are at an all-time high, the 75 trillion dollar global shadow banking system could implode at any time, and there are hundreds of trillions of dollars in derivatives that threaten to wipe out major banks all over the planet.  The last major worldwide financial crash was almost seven years ago, and very little has been done since that time to prepare for the next one.  If global markets do not calm down, we could see carnage in the months ahead that is absolutely unprecedented.

For months, European authorities have been promising us that a “Grexit” is already “priced in” to the markets and that any “contagion” from the Greek crisis will be “contained”.  Of course everyone knew that was just a smokescreen.  Just in the past couple of days since the Greek “no” vote, European stocks have already been crashing.  The following comes from Zero Hedge…

Does this look contained to you?

Portugal, Spain, and Italy all collapsing… 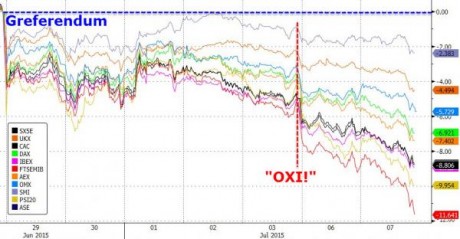 Will the same thing happen again this time?

And just like I have warned repeatedly, European bond yields have started to soar.  When bond yields go up, bond prices go down, so many bond investors are losing a tremendous amount of money right now.  Here is more from Zero Hedge… 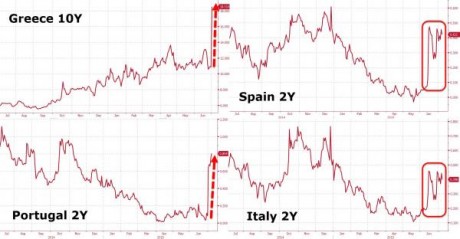 If there is not a last minute deal between Greece and her creditors, what we have witnessed so far in the bond markets will just be the tip of the iceberg.  In the months ahead, we could witness a bond crash unlike anything that we have ever seen in all of history.  Just consider what Egon von Greyerz recently told Eric King…

There is no liquidity in this market and this is where we will soon see a problem. We will see the bond market totally seizing up in the next few months. Eric, people simply don’t understand that this is a much bigger problem than Greece.

So we are talking about a worldwide problem, not just a Greek problem. The majority of the $100 trillion bond market is worthless, and of course a ticking time-bomb of over $1 quadrillion worth of derivatives is linked to that. This means that, sadly, we are heading into a major contagion that will lead to financial catastrophe for the world. This will also lead to an implosion of all bubble assets across the globe.

Hmm – there is that word “derivatives” again.

It is funny how that keeps popping up.

As things unravel over in Europe, a lot of desperate Europeans are feverishly purchasing physical gold.  The following comes from Bloomberg…

European investors are increasing purchases of gold as Greece’s turmoil boosts the appeal for an alternative to the euro.

Demand from Greek customers for Sovereign gold coins was double the five-month average in June, the U.K. Royal Mint said in an e-mailed statement. CoinInvest.com, an online retailer, said sales on Saturday and Sunday were the highest since Cyprus limited cash withdrawals in 2013, driven by a jump in German, French and Greek buyers.

Investors are searching for a safe haven after Greece imposed capital controls, closed banks and stopped selling gold coins to the public until at least July 6.

The turmoil in China’s stock market is so bad that some companies are calling it quits.

Over 700 Chinese companies have halted trading to “self preserve,” according to the state media. That means about a quarter of the companies listed on China’s two big exchanges — the Shanghai and Shenzhen — are no longer trading.

Desperate measures are being employed to try to stop the stock market crash in China.  For example, over the weekend an alliance of securities brokerages pledged to invest “at least 120 billion yuan” in order to stabilize stock prices…

The Chinese central bank has gotten involved as well.  In fact, the People’s Bank of China has taken the dramatic step of actually directly loaning money to brokerages…

In an extraordinary move, the People’s Bank of China has begun lending money to investors to buy shares in the flailing market. The Wall Street Journal reports this “liquidity assistance” will be provided to the regulator-owned China Securities Finance Corp, which will lend the money to brokerages, which will in turn lend to investors.

The dramatic intervention marks the first time funds from the central bank have been directed anywhere other than the banks, signalling serious concern from authorities about the crisis.

In addition, the Chinese government has taken the following steps to intervene…

-All short selling of stocks has been banned.

-China’s national social security fund has been banned from selling stocks, but they can continue to buy stocks.

-Local media has been banned from using the terms “equity disaster” and “rescue the market” in their news reports.

But despite everything that you just read, Chinese stocks have still been falling.

Meanwhile, global commodity prices are crashing.  Just check out this chart.  This is also something that happened before U.S. stocks crashed back in 2008.

Thankfully, U.S. stocks have not started crashing yet.  But it should be noted that the “smart money” in the United States has been selling stocks like crazy since the “no” vote in the Greek referendum.  And if the patterns that we witnessed seven years ago hold up, it is just a matter of time before we experience a stock market crash too.

Incredibly, there are a lot of people out there that very strongly believe that everything is going to be just fine.  They have tremendous faith in the central bankers and in our political leaders, and they are assuring all the rest of us that there is no possible way that the global financial system could be brought down again.

I truly wish that they were right.  If everything was going to be just fine, instead of writing about the coming economic collapse I could write about sports or do a blog dedicated to LOLcats.  But of course the truth is that the “hopetimists” are dead wrong.

A great shaking is coming to our world, and life as we know it is about to change in a major way.