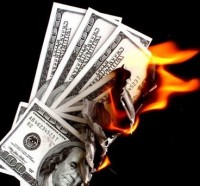 The foreclosure fraud crisis seems to escalate with each passing now.  It is being reported that all 50 U.S. states have launched a joint investigation into alleged fraud in the mortgage industry.  This is a huge story that is not going to go away any time soon.  The truth is that it would be hard to understate the amount of fraud that has gone on in the U.S. mortgage industry, and we are watching events unfold that could potentially rip the U.S. economy to shreds.  Many are now referring to this crisis as “Foreclosure-Gate“, and already it is shaping up to be the worst thing that has ever happened to the U.S. mortgage industry.  At this point, it seems inevitable that some financial institutions will go under as a result of this mess.  In fact, by the end of this thing we might see a whole bunch of lending institutions crash and burn.  This crisis is very hard to describe because it is just so darn complicated, but it is worth it to try to dig into this thing and understand what is going on because it has the potential to absolutely decimate the entire U.S. mortgage industry.

The truth is that there was fraud going on in every segment of the mortgage industry over the past decade.  Predatory lending institutions were aggressively signing consumers up for mortgages that they knew they could never repay.  Many consumers were also committing fraud because a lot of them also knew that they could never possibly repay the mortgages.  These bad mortgages were fraudulently bundled up and securitized, and these securitized financial instruments were fraudulently marketed as solid investments.  Those who certified that these junk securities were “AAA rated” also committed fraud.  Then these securities were traded at lightning speed all over the globe and a ton of mortgage paperwork became “lost” or “missing”.

Then, when it came time to foreclose on these bad mortgages, a whole bunch more fraud started being committed.  The reality is that the “robo-signing” scandal is just the tip of the iceberg.  The following are six things that you should know about how deep this foreclosure fraud crisis really goes….

#1 According to the Associated Press, financial institutions were hiring just about whoever they could find, including hair stylists and Wal-Mart employees, as “foreclosure experts” to help them rush through the massive backlog of foreclosures that were rapidly piling up.

Apparently many of these “foreclosure experts” barely even knew what a “mortgage” was according to the AP….

In depositions released Tuesday, many of those workers testified that they barely knew what a mortgage was. Some couldn’t define the word “affidavit.” Others didn’t know what a complaint was, or even what was meant by personal property. Most troubling, several said they knew they were lying when they signed the foreclosure affidavits and that they agreed with the defense lawyers’ accusations about document fraud.

#2 There is soon going to be a colossal legal scramble to figure out who actually owns millions of U.S. mortgages.

In his recent article entitled “Invasion Of The Robot Home Snatchers“, Robert Scheer described the complete and total mess that the U.S. mortgage industry has created….

How do you foreclose on a home when you can’t figure out who owns it because the original mortgage is part of a derivatives package that has been sliced and diced so many ways that its legal ownership is often unrecognizable? You cannot get much help from those who signed off on the process because they turn out to be robot signers acting on automatic pilot. Fully 65 million homes in question are tied to a computerized program, the national Mortgage Electronic Registration Systems (MERS), that is often identified in foreclosure proceedings as the owner of record.

Meanwhile, more organizations are stepping forward to help homeowners fight foreclosures.  National People’s Action, PICO National Network, Industrial Areas Foundation, Alliance of Californians for Community Empowerment and the Northwest Federation of Community Organizations have all partnered with the SEIU to launch the “Where’s The Note” campaign which is going to encourage homeowners to demand to see the note before submitting to a foreclosure.  Campaigns such as this are going to make foreclosures much more costly for banks.

#3 Legal battles over foreclosure documents could soon spawn thousands upon thousands of lawsuits across the United States.

Adam Levitin, a Georgetown University Law professor who specializes in mortgage finance and financial regulatory issues was recently quoted in an article on CNBC as saying the following about the situation we are currently in….

The mortgage is still owed, but there’s going to be a problem figuring out who actually holds the mortgage, and they would be the ones bringing the foreclosure. You have a trust that has been getting payments from borrowers for years that it has no right to receive. So you might see borrowers suing the trusts saying give me my money back, you’re stealing my money. You’re going to then have trusts that don’t have any assets that have been issuing securities that say they’re backed by a whole bunch of assets, and you’re going to have investors suing the trustees for failing to inspect the collateral files, which the trustees say they’re going to do, and you’re going to have trustees suing the securitization sponsors for violating their representations and warrantees about what they were transferring.

#4 The problems with foreclosure paperwork may be more widespread than anyone would have dared to imagine.

Attorney Richard Kessler recently conducted a study in which he found “serious errors” in approximately 75 percent of the court filings related to home repossessions that he examined.  Now he says that the foreclosure crisis could haunt the U.S. mortgage industry for the next ten years….

“Defective documentation has created millions of blighted titles that will plague the nation for the next decade.”

#5 If some banks discover that they are missing the paperwork for large numbers of mortgages (as is currently being alleged), those banks could be forced to significantly revalue those assets (as in “close to zero”) on their balance sheets.

John Carney of CNBC recently described it this way….

The most damaging thing that could happen to banks would be the discovery that they simply cannot prove they hold a mortgage on a house. In that case, the loan would probably have to be written down to near zero. Even for current loans, the regulatory reserve requirements would double as the loan would no longer be a functional mortgage but an ordinary consumer loan. Depending on the size of the “no docs” portion of the loan portfolio, this might be a minor blip or require a bank to raise new capital to fill the hole in the balance sheet.

#6 Renowned investor Jim Sinclair is actually warning that the collapse of securitized mortgage debt could be the “final shot” that will wipe out many financial institutions across the United States.

The recent warning that Sinclair posted on his blog is more than a little sobering….

I am asking for your attention again because of the depth of the fraud and now the size of the securitized mortgage debt OTC derivative pile of garbage that is in the trillions. This entire mountain of weapons of mass financial and social destruction is now in question. I have been telling you this for more than 2 years since the manufacturers and distributors of this crap were called by the NY Fed due to the loss of control over the paperwork.

I had dinner with my former partner, then lead director of and CEO of Bear Stearns. I could not contain myself so I asked him why he did so much business in OTC derivatives which were certain to bankrupt them. The answer I got was it was more than 50% of their profit. The right answer should have been it was more than 80% of their earnings.

Securitized mortgage debt is going to be the final shot that kills all kinds of financial entities in the Western world. The biggest holder of this putrid junk is pension funds.

Meanwhile, the stock market continues to go up, up, up as if everything is right in the world and as if a juicy new bull market is now upon us.

Well, let’s all join hands and sing happy songs around the campfire.

Perhaps if we all close our eyes and wish real hard all of this foreclosure fraud will just go away.