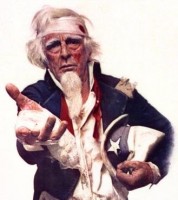 Does anyone really want to hear that America is in decline?  For decades, most of us have been raised to believe that the United States is “number one” and that anyone who doubts that fact is a “gloom and doomer” that should just pack up and move to “Russia” or “Iraq” or some other country where things are not nearly as good.  But does it do us or future generations any good to ignore the very serious signs of trouble that are erupting all around us?  The truth is that it is about time to wake up and admit how much trouble we are actually in.  The U.S. government is absolutely drowning in debt.  The entire society is absolutely drowning in debt.  We are being slaughtered in the arena of world trade, and every single month tens of billions of dollars (along with large numbers of factories and jobs) leave our shores for good.  Our infrastructure is failing, our kids are less educated and our incomes are going down.  We have serious, serious problems.  At one time, the U.S. economy was so dominant that it was not even worth talking about who was in second place.  That is no longer the case in 2010.  Our forefathers handed us the greatest economic machine in history and we have allowed it to fall apart right in front of our eyes.  A national economic crisis of historic proportions is getting worse with each passing month, and yet most of our leaders seem to be asleep at the switch.

So is American in decline?  Well, read the statistics below and decide for yourself.  The reality is that when you start connecting the dots it gets really hard to deny what is going on.

Urgent action must be taken if things are going to be turned around.  It is time to get our heads out of the sand.  It is not guaranteed that the United States will always be the greatest economy in the world or that we will even continue to be prosperous.

For many Americans, it will be incredibly difficult to admit that our nation has become a debt addict and an economic punching bag for the rest of the world.

But if we are never willing to admit what the problems are, how are we ever going to come up with the solutions?

What you are about to read below is going to absolutely shock many of you.  But hopefully it will shock you enough to get you to take action.  We desperately need to change course as a nation.

The following are 24 statistics about the United States economy that are almost too embarrassing to admit….

#2 The United States once had the highest proportion of young adults with post-secondary degrees in the world.  Today, the U.S. has fallen to 12th.

#3 In the 2009 “prosperity index” published by the Legatum Institute, the United States was ranked as just the ninth most prosperous country in the world.  That was down five places from 2008.

#4 In 2001, the United States ranked fourth in the world in per capita broadband Internet use.  Today it ranks 15th.

#5 The economy of India is projected to become larger than the U.S. economy by the year 2050.

#6 One prominent economist now says that the Chinese economy will be three times larger than the U.S. economy by the year 2040.

#7 According to a new study conducted by Thomson Reuters, China could become the global leader in patent filings by next year.

#9 The United States has lost a staggering 32 percent of its manufacturing jobs since the year 2000.

#10 Manufacturing employment in the U.S. computer industry is actually lower in 2010 than it was in 1975.

#15 The U.S. trade deficit is running about 40 or 50 billion dollars a month in 2010.  That means that by the end of the year approximately half a trillion dollars (or more) will have left the United States for good.

#18 According to a new study conducted by the Economic Policy Institute, if the U.S. trade deficit with China continues to increase at its current rate, the U.S. economy will lose over half a million jobs this year alone.

#19 American 15-year-olds do not even rank in the top half of all advanced nations when it comes to math or science literacy.

#21 The United States has the third worst poverty rate among the advanced nations tracked by the Organization for Economic Cooperation and Development.

#22 Since the Federal Reserve was created in 1913, the U.S. dollar has lost over 95 percent of its purchasing power.

#23 U.S. government spending as a percentage of GDP is now up to approximately 36 percent.

#24 The Congressional Budget Office is projecting that U.S. government public debt will hit 716 percent of GDP by the year 2080.

America is in decline and the situation is getting worse by the day.  If we are not willing to admit how bad things really are, then we are never even going to have a chance to find the solutions that we need.