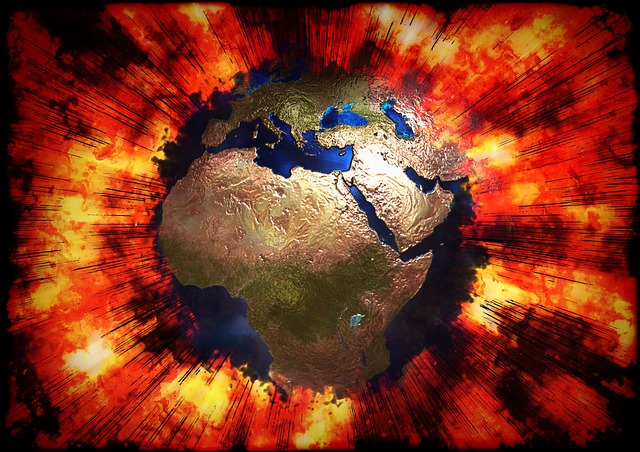 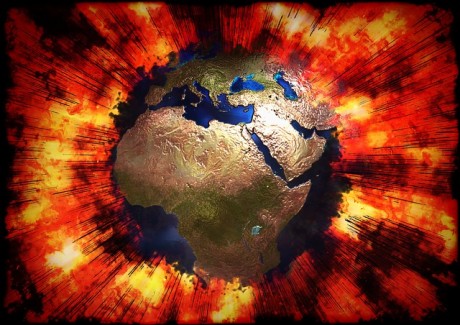 Warren Buffett once referred to derivatives as “financial weapons of mass destruction“, and it was inevitable that they would begin to wreak havoc on our financial system at some point.  While things may seem somewhat calm on Wall Street at the moment, the truth is that a great deal of trouble is bubbling just under the surface.  As you will see below, something happened in mid-September that required an unprecedented 405 billion dollar surge of Treasury collateral into the repo market.  I know – that sounds very complicated, so I will try to break it down more simply for you.  It appears that some very large institutions have started to get into a significant amount of trouble because of all the reckless betting that they have been doing.  This is something that I have warned would happen over and over again.  In fact, I have written about it so much that my regular readers are probably sick of hearing about it.  But this is what is going to cause the meltdown of our financial system.

Many out there get upset when I compare derivatives trading to gambling, and perhaps it would be more accurate to describe most derivatives as a form of insurance.  The big financial institutions assure us that they have passed off most of the risk on these contracts to others and so there is no reason to worry according to them.

Well, personally I don’t buy their explanations, and a lot of others don’t either.  On a very basic, primitive level, derivatives trading is gambling.  This is a point that Jeff Nielson made very eloquently in a piece that he recently published…

No one “understands” derivatives. How many times have readers heard that thought expressed (please round-off to the nearest thousand)? Why does no one understand derivatives? For many; the answer to that question is that they have simply been thinking too hard. For others; the answer is that they don’t “think” at all.

One very large financial institution that appears to be in serious trouble with these financial weapons of mass destruction is Glencore.  At one time Glencore was considered to be the 10th largest company on the entire planet, but now it appears to be coming apart at the seams, and a great deal of their trouble seems to be tied to derivatives.  The following comes from Zero Hedge…

Of particular concern, they said, was Glencore’s use of financial instruments such as derivatives to hedge its trading of physical goods against price swings. The company had $9.8 billion in gross derivatives in June 2015, down from $19 billion in such positions at the end of 2014, causing investors to query the company about the swing.

Glencore told investors the number went down so drastically because of changes in market volatility this year, according to people briefed by Glencore. When prices vary significantly, it can increase the value of hedging positions.

Last year, there were extreme price moves, particularly in the crude-oil market, which slid from about $114 a barrel in June to less than $60 a barrel by the end of December.

That response wasn’t satisfying, said Michael Leithead, a bond fund portfolio manager at EFG Asset Management, which managed $12 billion as of the end of March and has invested in Glencore’s debt.

According to Bank of America, the global financial system has about 100 billion dollars of exposure overall to Glencore.  So if Glencore goes bankrupt that is going to be a major event.  At this point, Glencore is probably the most likely candidate to be “the next Lehman Brothers”.

And it isn’t just Glencore that is in trouble.  Other financial giants such as Trafigura are in deep distress as well.  Collectively, the global financial system has approximately half a trillion dollars of exposure to these firms…

Worse, since it is not just Glencore that the banks are exposed to but very likely the rest of the commodity trading space, their gross exposure blows up to a simply stunning number:

For the banks, of course, Glencore may not be their only exposure in the commodity trading space. We consider that other vehicles such as Trafigura, Vitol and Gunvor may feature on bank balance sheets as well ($100 bn x 4?)

Call it half a trillion dollars in very highly levered exposure to commodities: an asset class that has been crushed in the past year.

The mainstream media is not talking much about any of this yet, and that is probably a good thing.  But behind the scenes, unprecedented moves are already taking place.

When I came across the information that I am about to share with you, I was absolutely stunned.  It comes from Investment Research Dynamics, and it shows very clearly that everything is not “okay” in the financial world…

Something occurred in the banking system in September that required a massive reverse repo operation in order to force the largest ever Treasury collateral injection into the repo market.   Ordinarily the Fed might engage in routine reverse repos as a means of managing the Fed funds rate.   However, as you can see from the graph below, there have been sudden spikes up in the amount of reverse repos that tend to correspond the some kind of crisis – the obvious one being the de facto collapse of the financial system in 2008:

What in the world could possibly cause a spike of that magnitude?

Well, that same article that I just quoted links the troubles at Glencore with this unprecedented intervention…

What’s even more interesting is that the spike-up in reverse repos occurred at the same time – September 16 – that the stock market embarked on an 8-day cliff dive, with the S&P 500 falling 6% in that time period.  You’ll note that this is around the same time that a crash in Glencore stock and bonds began.   It has been suggested by analysts that a default on Glencore credit derivatives either by Glencore or by financial entities using derivatives to bet against that event would be analogous to the “Lehman moment” that triggered the 2008 collapse.

The blame on the general stock market plunge was cast on the Fed’s inability to raise interest rates.  However that seems to be nothing more than a clever cover story for something much more catastrophic which began to develop out sight in the general liquidity functions of the global banking system.

Back in 2008, Lehman Brothers was not “perfectly fine” one day and then suddenly collapsed the next.  There were problems brewing under the surface well in advance.

Well, the same thing is happening now at banking giants such as Deutsche Bank, and at commodity trading firms such as Glencore, Trafigura and The Noble Group.

And of course a lot of smaller fish are starting to implode as well.  I found this example posted on Business Insider earlier today…

On September 11, Spruce Alpha, a small hedge fund which is part of a bigger investment group, sent a short report to investors.

The letter said that the $80 million fund had lost 48% in a month, according the performance report seen by Business Insider.

There was no commentary included in the note. No explanation. Just cold hard numbers.

Wow – how do you possibly lose 48 percent in a single month?

It would be hard to do that even if you were actually trying to lose money on purpose.

Sadly, this kind of scenario is going to be repeated over and over as we get even deeper into this crisis.

Meanwhile, our “leaders” continue to tell us that there is nothing to worry about.  For example, just consider what former Fed Chairman Ben Bernanke is saying…

But he doesn’t think you should take his word for it.

And even if you did, that isn’t the right question to ask anyway.

Speaking at a Wall Street Journal event on Wednesday morning, Bernanke said, “I don’t see any obvious major mispricings. Nothing that looks like the housing bubble before the crisis, for example. But you shouldn’t trust me.”

I certainly agree with that last sentence.  Bernanke was the one telling us that there was not going to be a recession back in 2008 even after one had already started.  He was clueless back then and he is clueless today.

Most of our “leaders” either don’t understand what is happening or they are not willing to tell us.

So that means that we have to try to figure things out for ourselves the best that we can.  And right now there are signs all around us that another 2008-style crisis has begun.

Personally, I am hoping that there will be a lot more days like today when the markets were relatively quiet and not much major news happened around the world.

Unfortunately for all of us, these days of relative peace and tranquility are about to come to a very abrupt end.