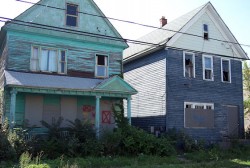 Today, millions of American families are extremely stressed out because they are working as hard as they can and yet they find at the end of the month they still haven’t been able to pay all of the bills.  Unfortunately, things are only going to get rougher in the years ahead.  The U.S. government has reached a terminal phase of the debt spiral that it is trapped in, and the only way to keep the system going is to print more money, borrow more money and spend more money.  But won’t this cause horrible inflation eventually?  Of course it will.  That is why so many people around the world have so loudly denounced “quantitative easing 2”.  The Federal Reserve is just creating hundreds of billions of dollars out of thin air and is chucking all of this money into the system in a desperate attempt to get it moving again.  This is also why the Tea Party movement is so angry about the record amounts of government debt that are being piled up.  When the U.S. government goes into more debt, it creates more dollars.  As the Federal Reserve and the U.S. government flood the system with new dollars, it means that there are now more dollars chasing roughly the same number of goods and services, and that is a recipe for inflation.

Fortunately (or unfortunately, however you want to look at it), most of this new money is trapped in the financial markets right now.  The first people that get their hands on all of this new money are banks, financial institutions and the folks down on Wall Street and right now they are hoarding much of it and much of it is going to pump up the stock market.

That is one reason why we saw such a tremendous bubble in commodities in 2010.  It is also a key reason why we have seen such a stock market “recovery”.

But eventually all of this new money is going to get into the hands of average U.S. consumers and it is going to start pushing the price of everything up.

Ronald Reagan once said that inflation is “as violent as a mugger, as frightening as an armed robber, and as deadly as a hit man.”  Ron Paul has called inflation a “hidden tax” on all of us, and that is exactly what it is.  All of the paper money that we are storing in the banks is losing a little bit of value every single day.  Over long periods of time, this loss of value becomes absolutely massive.  For example, did you know that the U.S. dollar has lost over 95 percent of its purchasing power since the Federal Reserve was created in 1913?

Unfortunately, as the Federal Reserve and the U.S. government continue to flood the system with new dollars in a desperate attempt to stimulate the economy, inflation is only going to get worse and worse and worse.

One recent study that analyzed price movement of 86 products in Wal-Mart stores found that the “real” rate of inflation was approximately twice the “official” rate reported by the U.S. government.

Others are convinced that the official rate of inflation is even higher than that.  For example, John Williams of ShadowStats.com has closely studied inflation in the U.S. and he believes that it is currently hovering somewhere around 5 percent.

However, John Williams does not believe that inflation is going to stay at 5 percent for much longer.  He recently released a “Hyperinflation Special Report” for 2010 that everyone needs to read.  Personally, I do not agree with all of his conclusions and I do not believe that things are going to happen quite as quickly as he is projecting, but his overall analysis is sound.

The truth is that our financial system has now reached a terminal phase.  Just look at the chart below.  Really look at it.  How can any financial system survive debt that is rising this fast?  The printing and borrowing of money continues to spiral out of control with no end in sight.  It is hard to imagine any scenario in which we can even achieve a “soft landing”.  One way or another, this exploding debt is going to take us down…..

So are the politicians sorry that they have saddled us with all of this debt?

Well, just the other day Nancy Pelosi was directly asked this question and the following was her response….

In fact there are quite a few politicians running around in Washington D.C. that are still convinced “that deficits don’t matter” and that all this debt will never catch up with us.

Well, hold on to your hats, because this is going to be the decade when all of this debt really does start to catch up with us.

One of the ways that we are going to feel the pain is through inflation.

In the months and years ahead, wages will remain relatively stable and government entitlement payments will not increase much while prices for the basic things that American families need go through the roof.

Have you noticed this yet?  Have any of the packages that you buy regularly seemed to shrink in recent months?

Sadly, it looks like food prices are headed even higher.  According to a recent report by Reuters, world food prices hit an all-time record high in December….

World food prices rose to a record in December on higher sugar, grain and oilseed costs, the United Nations said, exceeding levels reached in 2008 that sparked deadly riots from Haiti to Egypt.

So what are you and your family going to do if a worldwide food shortage pushes food prices up significantly?

Another place where American families are really going to start feeling the pain is at the gas pump.

Do you remember back in October when I warned you that 100 dollar oil is coming?

Well, the price of Brent crude reached 95 dollars a barrel for the first time in almost two years on Monday.

Unfortunately, there are many who now believe that the price of oil is going to go a lot higher than that.

John Hofmeister, the former president of Shell Oil, believes that American consumers will likely be paying 5 dollars for a gallon of gas by the time 2012 rolls around.

So is your employer going to be paying you much more to keep up with rising gas prices?

Quite a few of the readers of this column have stated that they simply cannot afford health insurance anymore and so they are now doing without it.  There are millions of Americans that refuse to go to a hospital because there is no way they can pay for health insurance and there is no way they can pay the ridiculous fees charged by our hospitals today.

Sadly, in the months and years to come millions more working American families will be pushed into poverty-like conditions by rising inflation.

Already we are seeing huge numbers of American families that are working as hard as they can not being able to afford the basics.

A year-end survey conducted by Pew Research found the following….

*51% of Americans say that it is difficult to afford health care.

*48% of Americans say that it is difficult to pay their home heating and electric bills.

*29% of Americans say that it is difficult to afford food.

Those numbers should be quite sobering for us all – especially considering the fact that jobs are becoming very difficult to get.

According to the same Pew Research study, a staggering 46 percent of all Americans say that someone in their household has been without a job and looking for work at some point during the past year.

The truth is that there are 7 million less middle class jobs in America today than there were just a decade ago.

So if even one person if your family has a decent job you should consider yourself to be very fortunate.

But sadly even families where everyone is working are going to continue to be stretched further and further financially as rapidly increasing inflation steals our purchasing power a little bit more every single day.

The “good times” are rapidly coming to an end.  The greatest debt-fueled party in the history of the world is wrapping up and you should enjoy it while you still can, because the years ahead are just going to be brutal.