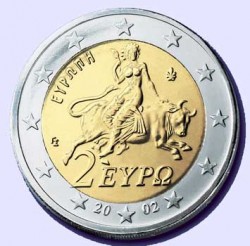 The future of the euro is hanging by a thread at the moment.  The massive debt problems of nations such as Greece, Italy and Portugal are dragging down the rest of the Europe, and the political will in northern Europe to continue to bail out these debt-ridden countries is rapidly failing.  Could the end of the euro actually be in sight?  The euro was really a very interesting experiment.  Never before had we seen a situation where monetary union was tried without political and fiscal union along with it on such a large scale.  The euro worked fairly well for a while as long as everyone was paying their debts.  But now Greece has collapsed financially, and several other countries in the eurozone (including Italy) are on the way.  Right now the only thing holding back a complete financial disaster in Europe are the massive bailouts that the wealthier nations such as Germany have been financing.  But now a wave of anti-bailout sentiment is sweeping Germany and the future of any European bailouts is in doubt.  So what does that mean for the euro?  It appears that there are two choices.  Either we will see much deeper fiscal and political integration in Europe (which does not seem likely at this point), or we will see the end of the euro.

That status quo cannot last much longer.  The citizens of wealthy nations such as Germany are becoming very resentful that gigantic piles of their money are being poured into financial black holes such as Greece.  In fact, it is rapidly getting to the point where we could actually see rioting in the streets of German cities over all of this.

All of this instability is creating a tremendous amount of fear in world financial markets.  Nobody is sure if Greece is going to default or not.

Without more bailout money, Greece will most certainly default.  If anyone does not think that one domino cannot set off a massive chain reaction, just remember what happened back in 2008.

Bear Stearns and Lehman Brothers set off a chain reaction that was felt in every corner of the globe.  All of a sudden credit markets froze up because nobody was sure who had significant exposure to bad mortgages.

Today, the entire world financial system runs on debt, so when there is a credit crunch it can have absolutely devastating economic consequences.  The financial crisis of 2008 helped plunge the world into the greatest recession that the globe had seen since the 1930s.

In the old days, nations such as Greece that got into too much debt would just fire up the printing presses and cover over their problems with devalued currency.

Well, those nations that are using the euro simply cannot do that.  The government of Greece cannot simply zap a whole bunch of euros into existence in order to solve their problems.

Right now, major European banks are holding massive amounts of debt from various European governments on their balance sheets.  Most of these European banks are also very highly leveraged.  Even a moderate drop in the value of those debt holdings could wipe out a number of these banks.

The head of the IMF, Christine Lagarde, recently told Der Spiegel the following….

“There has been a clear crisis of confidence that has seriously aggravated the situation. Measures need to be taken to ensure that this vicious circle is broken”

Unfortunately, what Lagarde said was right.  You see, the financial system in Europe is a “confidence game” and a “crisis of confidence” is all that it would take to bring it down because it does not have a solid foundation.

Just like the U.S. financial system, the financial system in Europe is a mountain of debt, leverage and risk.  If the winds start blowing the wrong direction, the entire thing could very easily come tumbling down.

Over the past couple of weeks, the outlook in Europe has become decidedly negative.  For example, one senior IMF economist is now actually projecting that Greece will experience a “hard default” at some point in the coming months….

I expect a hard default definitely before March, maybe this year

If Greece defaults, that would mean that the bailouts have failed.  That would also mean that several other nations in Europe would be in danger of defaulting soon as well.

The consequences of a wave of defaults in Europe would be absolutely staggering.  As mentioned above, major banks in Europe are deeply exposed to sovereign debt.

“It’s stating the obvious that many European banks would not survive having to revalue sovereign debt held on the banking book at market levels.”

There are quite a few major European banks that are in imminent danger of collapse.

Even though there hasn’t been any sovereign defaults yet, we are already starting to see massive financial devastation in Europe.  Just check out some of the financial carnage from Monday….

*The stock market in Germany was down more than 5%.

*The stock markets in France and Italy were down more than 4%.

*Royal Bank of Scotland was down more than 12%.

*Deutsche Bank was down more than 6%.

*Societe Generale was down more than 8%.

*Italy’s UniCredit was down more than 7%.

*Barclays was down more than 6%

*Credit Suisse was down more than 4%.

Just like in 2008, banking stocks are leading the decline.  We have another major financial crisis on our hands and there is no solution in sight.

As the financial world becomes increasingly unstable, investors are flocking to gold.  In case you have not noticed, gold is up over $1900 an ounce again.

Well, on Wednesday Germany’s constitutional court is scheduled to announce its verdict on the legality of the latest bailout package for Greece.  The court is expected to rule that the bailout package is legal, but if they don’t that would be really bad news for the euro.

However, whatever the court rules, the reality is that the turbulent political atmosphere inside Germany is probably a much bigger issue as far as the future of the euro is concerned.

Right now, Germans are overwhelmingly opposed to more bailouts.  German Chancellor Angela Merkel’s political party just suffered a resounding defeat in local elections in Germany, and many within her own coalition are withdrawing support for any more bailouts.

This is going to make it very difficult to save the euro.  At this point, Germans have very little faith in the currency.

Just check out what Bob Chapman of the International Forecaster recently wrote about the current atmosphere in Germany….

76% of Germans say they have little or no faith in the euro, up from 71% two months ago. This is what we have been stating for ten years. Long-term 69% to 71% have never wanted the euro. The poll is not at all surprising. The Germany people are saying we have put up with the euro and euro zone for long enough – we want out now.

Germans are also very much against even deeper European economic integration.  For example, recent polling found that German voters are against the introduction of “Eurobonds” by about a 5 to 1 margin.

But Germans are not the only ones that are tired of the euro.  The countries of southern Europe have come to view the euro as a “straightjacket” that keeps them from having the financial flexibility that they need to deal with their debts.

Many people living in southern Europe consider the euro to be a financial instrument that allows nations such as Germany to have way too much power over them.  Just check out what Professor Giacomo Vaciago of Milan’s Catholic University recently had to say….

“It’s clear that the euro has virtually failed over the last ten years, even if you are not supposed to say that. We pretended to be Germans, but it was an illusion”

But if the bailouts fall apart and the euro collapses, we are going to see nations such as Greece fall into total financial collapse.

Without help, there is no way that Greece is going to be able to avoid a default.

Sadly, Greece is far from the only major financial problem in Europe.  Portugal, Ireland and Italy also have debt to GDP ratios that are well above 100%.

As mentioned earlier, this is a massive problem for the financial system of Europe, because nearly all of the major European banks are leveraged to the hilt and they are massively exposed to government debt.

Overall, the entire global banking system has a total of 2 trillion dollars of exposure to Greek, Irish, Portuguese, Spanish and Italian debt.

If European countries start defaulting, the dominoes are going to start falling and things will get really messy really quickly.

There are two things that could keep defaults from happening.

Number one, Germany and the other wealthy nations in the eurozone could just suck it up and decide to pour endless bailouts into nations such as Greece and Italy.

Number two, the nations of the eurozone could opt for much deeper economic and political integration.  That would mean a massive loss of sovereignty, but it would save the euro, at least for a little while.

Right now, the political will for either of those two choices is simply not there.  That does not mean that the political elite of Europe will not try to ram through some sort of a plan, but the reality is that Germans are already so upset about what has been going on that they are about ready to riot in the streets.

Yes, the end of the euro is a real possibility.

If the euro does collapse, it would likely cause a financial panic that would make 2008 look like a Sunday picnic.

So what do all of you think about the future of the euro?  Please feel free to leave a comment with your thoughts below….