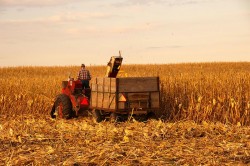 Are you ready for the next major global food crisis?  The price of corn hit an all-time record high on Thursday.  So did the price of soybeans.  The price of corn is up about 50 percent since the middle of last month, and the price of wheat has risen by about 50 percent over the past five weeks.  On Thursday, corn for September delivery reached $8.166 per bushel, and many analysts believe that it could hit $10 a bushel before this crisis is over.  The worst drought in the United States in more than 50 years is projected to continue well into August, and more than 1,300 counties in the United States have been declared to be official natural disaster areas.  So how is this crisis going to affect the average person on the street?  Well, most Americans and most Europeans are going to notice their grocery bills go up significantly over the coming months.  That will not be pleasant.  But in other areas of the world this crisis could mean the difference between life and death for some people.  You see, half of all global corn exports come from the United States.  So what happens if the U.S. does not have any corn to export?  About a billion people around the world live on the edge of starvation, and today the Financial Times ran a front page story with the following headline: “World braced for new food crisis“.  Millions upon millions of families in poor countries are barely able to feed themselves right now.  So what happens if the price of the food that they buy goes up dramatically?

You may not think that you eat much corn, but the truth is that it is in most of the things that we buy at the grocery store.  In fact, corn is found in about 74 percent of the products we buy in the supermarket and it is used in more than 3,500 ways.

Americans consume approximately one-third of all the corn grown in the world each year, and we export massive amounts of corn to the rest of the world.  Unfortunately, thanks to the drought of 2012 farmers are watching their corn die right in front of their eyes all over the United States.

The following is from a Washington Post article that was posted on Thursday….

Nearly 40 percent of the corn crop was in poor-to-very-poor condition as of Sunday, according to the U.S. Agriculture Department. That compared with just 11 percent a year ago.

“The crop, if you look going south from Illinois and Indiana, is damaged and a lot of it is damaged hopelessly and beyond repair now,” said Sterling Smith, a Citibank Institutional Client Group vice president who specializes in commodities.

About 30 percent of the soybean crop was in poor-to-very-poor condition, which compared with 10 percent a year ago.

Conditions for both crops are expected to worsen in Monday’s agriculture agency report.

More than half of the country is experiencing drought conditions right now, and this is devastating both ranchers and farmers.  Right now, ranchers all over the western United States are slaughtering their herds early as feed prices rise.  It is being projected that the price of meat will rise substantially later this year.

The following is from a recent MSNBC article….

For example, you may want to make room in your freezer for meat because prices for beef and pork are expected to drop in the next few months as farmers slaughter herds to deal with the high cost of grains that are used as livestock feed, said Shawn Hackett of the agricultural commodities firm Hackett Financial Advisors in Boynton Beach, Fla. But, he added, everything from milk to salad dressing is going to cost more in the near term, and eventually the meat deals will evaporate as demand outstrips supply.

So there may be some deals on meat in the short-term as all of these animals are slaughtered, but in the long-term we can expect prices to go up quite a bit.

But it isn’t as if food is not already expensive enough.  The price of food rose much faster than the overall rate of inflation last year.

As I wrote about yesterday, American families found their grocery budgets stretched very thin during 2011.  Just check out these food inflation rates from last year….

If prices rose that fast last year, what will those statistics look like at the end of this year if this drought continues?

Sadly, America is not alone.  According to Bloomberg, the U.S. is not the only place that is having problems with crops right now….

Dry weather in the U.S., as well as the Black Sea region; a poor start to the Indian monsoon and the possibility of emerging El Nino conditions suggest agricultural products may rally, Barclays said in a report e-mailed yesterday.

And all of this is very bad news for a world that is really struggling to feed itself.

In many countries around the globe, the poor spend up to 75 percent of their incomes on food.  Just a 10 percent increase in the price of basic food staples can be absolutely devastating for impoverished families that are living right on the edge.

You may not have ever known what it is like to wonder where your next meal is going to come from, but in many areas around the world that is a daily reality for many families.

Just check out what is happening in Yemen….

Crying and staring at his distended belly, 6-year-old Warood cannot walk on his spindly legs.

“We become so familiar with sickness,” said his mother, who according to social norms here does not give her name to outsiders.

She says she has watched two of her children die. “I have to decide: Do I buy rice or medicine?”

The United Nations estimates that 267,000 Yemeni children are facing life-threatening levels of malnutrition. In the Middle East’s poorest country hunger has doubled since 2009. More than 10 million people — 44% of the population — do not have enough food to eat, according to the United Nation’s World Food Program.

In the United States, we aren’t going to see starvation even if nearly the entire corn crop fails.  Our grocery bills might be more painful, but there is still going to be plenty of food for everyone.

In other areas of the world, a bad year for global crops can mean the difference between life and death.

Sadly, it is being projected that the current drought in the United States will last well into August at least.

But even when this current drought ends, our problems will not be over.  The truth is that we are facing a very severe long-term water crisis in the western United States.

Just check out the following facts from foodandwaterwatch.org….

-California has a 20-year supply of freshwater left

-New Mexico has only a ten-year supply of freshwater left

-The U.S. interior west is probably the driest it has been in 500 years, according to the National Academy of Sciences and the U.S. Geological Survey

-Lake Mead, the vast reservoir of the Colorado River, has a 50 percent chance of running dry by 2021

The 1,450 mile long Colorado River is probably the most important body of water in the southwestern United States.

Fifty miles from the sea, 1.5 miles south of the Mexican border, I saw a river evaporate into a scum of phosphates and discarded water bottles. This dirty water sent me home with feet so badly infected that I couldn’t walk for a week. And a delta once renowned for its wildlife and wetlands is now all but part of the surrounding and parched Sonoran Desert. According to Mexican scientists whom I met with, the river has not flowed to the sea since 1998. If the Endangered Species Act had any teeth in Mexico, we might have a chance to save the giant sea bass (totoaba), clams, the Sea of Cortez shrimp fishery that depends upon freshwater returns, and dozens of bird species.

So let this stand as an open invitation to the former Secretary of the Interior and all water buffalos who insist upon telling us that there is no scarcity of water here or in the Mexican Delta. Leave the sprinklered green lawns outside the Aspen conferences, come with me, and I’ll show you a Colorado River running dry from its headwaters to the sea. It is polluted and compromised by industry and agriculture. It is overallocated, drought stricken, and soon to suffer greatly from population growth. If other leaders in our administration continue the whitewash, the scarcity of knowledge and lack of conservation measures will cripple a western civilization built upon water. “You can either do it in crisis mode,” Pat Mulroy said at this conference, “or you can start educating now.”

People need to wake up because we have some very serious water issues in this country.

In the heartland of America, farmers pump water from a massive underground lake known as the Ogallala Aquifer to irrigate their fields.

The problem is that the Ogallala Aquifer is rapidly being pumped dry.

According to the U.S. Geological Survey, “a volume equivalent to two-thirds of the water in Lake Erie” has been permanently drained from the Ogallala Aquifer since 1940.

Once upon a time, the Ogallala Aquifer had an average depth of about 240 feet.

Today, the average depth of the Ogallala Aquifer is just 80 feet, and in some parts of Texas the water is totally gone.

Right now, the Ogallala Aquifer is being drained at a rate of approximately 800 gallons per minute.

Once that water is gone it will not be replaced.

So what will the “breadbasket of America” do then?

Most Americans do not realize this, but we are facing some major, major water problems.

But even if we get through this year okay by some miracle, that doesn’t mean that our problems are over. 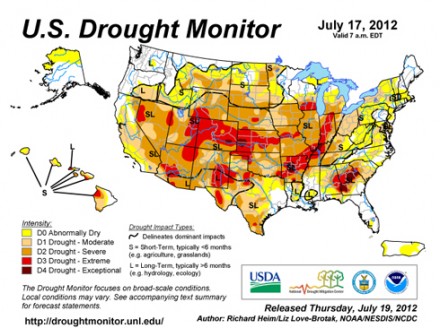