The bank runs that we are watching right now in Greece are shocking, but they are only just the beginning.  Since May 6th, nearly one billion dollars has been withdrawn from Greek banks.  For a small nation like Greece, that is an absolutely catastrophic number.  At this point, the entire Greek banking system is in danger of collapsing.  If you had money in a Greek bank, why wouldn’t you pull it out?  If Greece leaves the euro, all euros in Greek banks will likely be converted to drachmas, and the value of those drachmas will almost certainly decline dramatically.  In fact, it has been estimated that Greek citizens could see the value of their bank accounts decline by up to 50 percent if Greece leaves the euro.  So if you had money in a Greek bank, it would only make sense to withdraw it and move it to another country as quickly as possible.  And as the eurozone begins to unravel, this is a scenario that we are going to see play out in country after country.  As member nations leave the eurozone, you would be a fool to have your euros in Italian banks or Spanish banks when you could have them in German banks instead.  So the bank runs that are happening in Greece right now are only a preview of things to come.  Before this crisis is over we are going to see bank runs happening all over Europe.

If Greece leaves the euro, the consequences are likely to be quite messy.  Those that are promoting the idea that a “Grexit” can be done in an orderly fashion are not being particularly honest.  The following is from a recent article in the Independent….

“Whoever tells you a Greek exit would be no big deal is an idiot, lying or disingenuous,” said Sony Kapoor of the European think-tank Re-Define. Economists fear that a disorderly exit would prompt a huge run by investors on Spanish and Italian debt, forcing those countries to seek support from an EU bailout fund, which, with a capacity of just €500bn, is widely regarded as too small to cope with those pressures.

If Greece is allowed to leave the euro, that will be a signal that other countries will eventually be allowed to leave as well.  Nobody in their right mind would want their euros stuck in Spanish or Italian banks if those countries end up converting back to national currencies.

Fear is a powerful motivator.  If Greece converts their euros back to drachmas, that will be a clear signal that all euros are not created equally.  The race to move money into German banks will accelerate dramatically.

And a Greek exit from the euro is looking more likely with each passing day.  Even the IMF is now admitting that it is a very real possibility….

Christine Lagarde, head of the IMF, warned she was “technically prepared for anything” and said the utmost effort must be made to ensure any Greek exit was orderly. The effect was likely to be “quite messy” with risks to growth, trade and financial markets. “It is something that would be extremely expensive and would pose great risks but it is part of options that we must technically consider,” she said.

Meanwhile, banks in other troubled European nations are already on shaky ground.  The Spanish banking system is an absolute disaster zone at this point and on Monday night Moody’s downgraded the credit ratings of 26 Italian banks.

The situation in Italy is especially worth keeping a close eye on.  As Ambrose Evans-Pritchard recently noted, things are not looking good for Italy at all….

Italy’s former premier Romano Prodi said the EU risks instant contagion to Spain, Italy, and France if Greece leaves. “The whole house of cards will come down”, he said

Angelo Drusiani from Banca Albertini said the only way to avert catstrophe is to convert the European Central Bank into a lender of last resort. Otherwise Italy faces “massive devaluation, three to five years of hyperinflation, and unbearable unemployment.”

So what can be done about any of this?

Well, there is actually a lot that could be done if politicians in Europe were willing to think outside of the established global financial paradigm.

The truth is that Greece could solve their current financial problems in four easy steps.  They would have to be willing to stick it to the rest of Europe and to risk being blackballed by the international community, but it could be done.

The following is my prescription for Greece….

1) Default on all debts.

3) Issue drachmas that are debt-free and that do not come from a central bank.  Instead, have the Greek government create them and spend them directly into circulation.

4) Enjoy a return to prosperity.

And once the Greek economy was growing again, it would certainly be possible for them to make the transition to “hard money” if they wanted to.

It is imperative that we all understand that just because the global financial system works a certain way today does not mean that it must always work that way.

If you have a few minutes, I want you to watch an incredible speech by a 12-year-old Canadian girl named Victoria Grant.  In this 6 minute speech, she details how the bankers are defrauding the people of Canada and how the Canadian government does not actually need to borrow a single penny from the bankers….

If a 12-year-old girl can figure this out, then why can’t the rest of us?

Sadly, the financial world still seems enamored with the corrupt central banking system that has gotten us into this mess.  In fact, one recent poll found that Federal Reserve Chairman Ben Bernanke has a 75 percent approval rating from global investors.

Right now, America is going down the same path as Greece, Spain and Italy have gone.  Eventually we will hit a wall and our financial system will fall apart.

We need the American people to understand that the Federal Reserve system is a perpetual debt machine.  The U.S. national debt is now more than 5000 times larger than it was when the Fed was first created.  It is at the very core of our national financial problems.

When will people wake up and realize that central banking is the problem and not the solution?

When will people wake up and realize that national governments do not have to go into debt to anyone if they do not want to?

In our world today, there is far more debt than there is money.

It is a system that will inevitably crash.

But there are other alternatives.

Unfortunately, politicians all over the globe continue to want to be married to our current debt-based financial system.

As a result, we will suffer the consequences of that system. 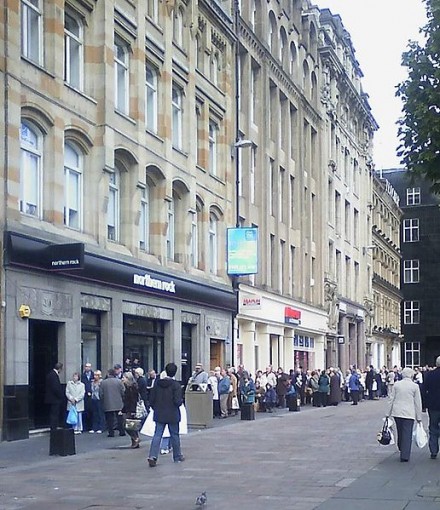