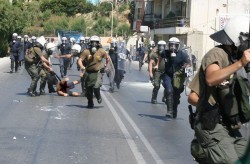 The rest of the world needs to sit up and take notice of what is going on in Greece right now.  This is what can happen when you allow government debt to spiral out of control.  Once it becomes clear that you can’t pay your debts, a financial collapse can happen very suddenly and you start losing your sovereignty to those that you must turn to for financial help.  So is the financial collapse of Greece the “canary in the coal mine” for the global economy?  EU finance ministers have given the Greek government two weeks from Monday to approve another round of brutal austerity measures.  If the austerity measures are not approved, Greece will not receive the next bailout installment of 12 billion euros.  If that happens, the whole globe better buckle up because it is going to get crazy.

July 3rd is the deadline.  Basically the EU has put a gun to the head of the Greek government.  Without this bailout money, Greece will default and economic hell will break loose all across the country.

It is important to keep in mind that this is just the first Greek bailout that we are talking about.  Last year, the EU and the IMF agreed to provide the Greek government with a 110 billion euro bailout. The current 12 billion euro installment is part of that package.

Sadly, it has become apparent that the first bailout is not going to be nearly enough for Greece.  A second bailout, which will be the same size or even larger, is already being discussed.  This is going to put the Greek people even more under the heel of the money powers in Europe.

Keep in mind that all of these “bailouts” are just more loans.  There is no way that the Greeks are ever going to be able to repay all of this money.

But this is what happens when a nation lets debt get out of control.  For years and years it can seem like all of that debt does not have any consequences, but then the day of reckoning comes and it is a complete and total nightmare.

In order to get the next installment of 12 billion euros, European finance ministers are insisting that the Greek Parliament approves a package of austerity measures that will be worth approximately 28 billion euros.

At this point, it is uncertain whether those austerity measures will pass.

However, the pressure on the Greek government to get them pushed through is immense.

These austerity measures include tax increases, budget cuts and a “large-scale privatization program”.

This is often what happens to third world nations that cannot pay their debts.  Organizations such as the IMF or the World Bank will come in and insist that they tax their people more, cut back on their spending and sell some of their public assets to big corporations.

As we can see from the wild protests that have been taking place in Greece, a significant percentage of the Greek population is not happy with all of these austerity measures.

Unfortunately, the EU and the IMF are able to put a lot more pressure on the Greek government than the Greek people are.

Greek Prime Minister George Papandreou recently gave the following warning to the Greek people about what could happen if this debt crisis ends badly….

The consequences of a violent bankruptcy or exit from the euro would be immediately catastrophic for households, the banks, and the country’s credibility.

Sung Won Sohn, an economics professor at California State University, recently made the following statement about the seriousness of the debt crisis in Europe….

So will these bailouts solve the problem?

No, giving Greece more loans is only going to kick the can down the road for a little while longer.

The truth is that Greece is bankrupt.  Unless huge amounts of Greek debt are forgiven, Greece is going to default sooner or later.

When confidence in the finances of a nation is lost, borrowing costs can go up very quickly.  Today, the yield on two year Greek bonds is up to 28.6%.

Anyone that has ever been late on paying their credit cards knows how painful an interest rate like that can be.

So why doesn’t Greece just slash government spending to the bone and get their financial house in order?

Well, it is not that easy.  Harsh austerity measures have already been implemented.  As a result, unemployment is rampant and there is rioting in the streets.

The truth is that, as an article in The Guardian recently explained, austerity has taken a brutal toll on the Greek economy….

A year of wage and pension cuts, benefit losses and tax increases has taken its toll: almost a quarter of the population now live below the poverty line, unemployment is at a record 16% and, as the economy contracts for a third year, economists estimate that about 100,000 businesses have closed.

As the economy crumbles, Greece has descended into an almost permanent state of civil unrest.

The fact that the EU and the IMF want even more austerity measures has sparked some wild rioting In Greece in recent days.  You can see video of the stunning violence going on in Greece right here.

Not all protesters are being violent.  Some of them are showing their displeasure in non-violent ways.  For example, workers for Greece’s state-owned electric utility are staging 48 hours of rolling strikes that are designed to create blackouts over large areas.

The frightening thing is that Greece is not alone.  Ireland has already received a bailout and they are probably going to need another one at some point.

Portugal is a financial basket case and they are probably next in line for a bailout.

The employment situation in Spain is absolutely nightmarish.  Spain will probably be able to squeak by without a bailout if the global economy stays stable, but if the dominoes start to fall Spain could be in a massive amount of trouble very quickly.

Not that many people are talking about Italy, but the truth is that Italy has a huge debt problem.  On Friday, Moody’s warned that it may downgrade Italy’s Aa2 debt rating at some point within the next 90 days.

Belgium and France also have very substantial debt problems.  They probably would not be the first dominoes to fall, but if the “contagion” starts to spread they could certainly have massive problems.

The truth is that Europe’s entire financial system is extremely vulnerable right now.  Big banks all over Europe (and especially in Germany) are leveraged to the hilt.  All it would take to topple many of them is a stiff breeze.

When Lehman Brothers collapsed, it was leveraged 31 to 1.

Today, German banks are leveraged 32 to 1.

That is why there is so much fear that the crisis in Greece could spread across the rest of Europe and start toppling dominoes.

The sovereign debt crisis in Europe did not happen overnight and it is going to be with us for a long, long time even if the global economy remains relatively stable.

At the moment, the best that officials in Europe can seem to come up with is to put off the pain for another day.  Pimco’s Mohamed El-Erian told CNBC the following on Monday….

“This problem is not going to go away. It’s going to weigh on markets here and we’re going to see the same set of headlines over and over again. We simply cannot continue to kick the can down the road, because we’re coming to the end of the road in Greece.”

So if Europe starts having major problems will the U.S. step in and help?

Yes, if the crisis in Europe gets worse, the Federal Reserve will probably step in just like they did back in 2008.

But the U.S. is rapidly approaching a day of reckoning like the one that Greece is going through.  The U.S. government has piled up the biggest mountain of debt in the history of the world and faith in the U.S. dollar is dying.

The economic crisis in the United States gets worse with each passing year.  Yes, the Federal Reserve can print up stacks of money and send it over to Europe, but that isn’t going to solve anything in the long run.  The truth is that the U.S. is not even going to be able to keep itself from drowning.

The world financial system is far more vulnerable today than it was back in 2008.  The next wave of the financial collapse is going to hit at some point, and when it does it is going to probably be even more painful than the last wave.

Our world is becoming an incredibly unstable place.