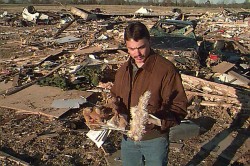 The worst natural disaster in the United States since Hurricane Katrina just happened, and many in the mainstream media are already treating it like back page news.  It can be really tempting to want to talk about whatever the next “news cycle” brings us, but right now we really need to pray for those affected by “the tornadoes of 2011”.  There are parts of Alabama, Mississippi and Georgia that will never, ever be the same again.  Entire towns have been wiped off the map.  Hundreds are dead and thousands have been seriously injured.  Over a million people lost power.  One of the tornadoes that ripped through the region was reported to be a mile wide.  How in the world are you supposed to get away from something like that once it is on top of you?  Many in the mainstream media have already acknowledged that this was the worst natural disaster in the U.S. since Hurricane Katrina took 1,800 lives back in 2005.  Over and over and over, those living in the region are describing the devastation by saying that they have “never seen anything like it”.  This truly was one for the history books.

The F5 tornado that ripped through the Tuscaloosa, Alabama area was reportedly so monstrous that it is still kind of difficult to believe that it was actually real.  The thing was a mile wide and scientists are estimating that it had winds that exceeded 260 miles an hour.

According to National Geographic, this monster tornado may have traveled a whopping 300 miles across Alabama and Georgia.

Can you even imagine the kind of devastation that we are talking about?

It is hard to even conceive of how much damage a mile-wide F5 tornado with winds of up to 260 MPH would do as it traveled across 300 miles.

Dozens are dead and close to a thousand people are injured in the city of Tuscaloosa alone.

At this point, the city looks like a war zone.  In fact, Tuscaloosa mayor Walter Maddox says that his city has been “obliterated”.

A stunned Maddox was quoted by The Telegraph as saying the following about the devastation….

“I don’t know how anyone survived,” said Mr Maddox. “It’s an amazing scene.

A state of emergency has been declared in Alabama, Arkansas, Georgia, Kentucky, Mississippi, Missouri, Oklahoma and Tennessee.

But this disaster will not be “cleaned up” in a few days or a few weeks.

This was literally a history changing event for millions of people.

The last time the death toll from a tornado outbreak was this high was back in March 1932.

The following is how an article posted on USA Today describes the devastation in the town of Smithville, Mississippi….

Powerful tornadoes swept through this northeastern Mississippi hamlet and across much of the South on Wednesday, splintering homes, shearing roofs and destroying lives. Smithville’s Town Hall was destroyed, as were the local high school, four churches and each of the town’s 14 businesses. Mattresses hung from tree branches, cars were flattened as if stepped on by giant feet, and rows of three-story pine trees snapped in half.

Do you think that Smithville will ever be the same?

Yes, the tornadoes of 2011 will be remembered for a very, very long time.

The people living in these areas deserve our prayers.

Thousands of lives have been permanently altered forever.  The following is just one example that CNN reported on….

Janet Puckett stands outside what’s left of her home on 30th Avenue in Alberta. Its walls crumbled under the force of the storm. Her living room and a front bedroom disappeared. The roof of the house got sucked up, too.

“A war zone,” she says of the mountains of broken 2-by-4s and other debris all around.

How would you feel if your roof and half your house were suddenly missing?

Would you feel safe living in the same area?

Would your life ever be the same again?

Sadly, massive tornado outbreaks seem to be happening with increasing frequency in the South.

Back on April 16th, a similar wave of very violent thunderstorms spawned approximately 140 tornadoes.  During that event, 22 people were killed in the state of North Carolina.

Overall, there have been approximately 600 tornadoes in the United States during April.  That is the most tornadoes that have ever been recorded in a single month.

Usually, the U.S. only experiences about 1,200 tornadoes for the entire year.  So what we are seeing right now is highly unusual.

The tornadoes that just ripped through the South also had a massive impact on the economy down there.

It has been estimated that up to 25 percent of all of the poultry houses in Alabama were either significantly damaged or destroyed.  It is also believed that millions of birds were killed.

Alabama produces more chicken than anywhere else in the United States except for Georgia and Arkansas.

So get ready to pay more for chicken.

Meanwhile, many key agricultural areas of Texas are experiencing their worst drought in decades.  According to CNBC, climate experts are becoming extremely concerned about the lack of rainfall….

Data issued Thursday by a consortium of national climate experts said 95 percent of Texas was suffering “severe drought,” or worse, up from 92 percent a week earlier. More than 70 percent of the state was in the worse conditions of “extreme drought” or “exceptional drought.” That is up from 68 percent a week ago in extreme and exceptional drought.

Not only that, some areas along the Mississippi River are having to deal with “historic flooding” right now.  The following is from a recent article on Accuweather.com….

As if tornadoes and damaging thunderstorms were not enough, historic flooding is also threatening the Mississippi River, below St. Louis, as well as the lower part of the Ohio River.

The rising waters are expected to top levels set during February 1937. This mark is the middle Mississippi Valley’s equivalent to the 1993 event farther north along Old Man River.

Things are really crazy out there right now.

Please pray for those that lost family and friends during these recent tornadoes.  There are thousands upon thousands of good people down in the South that are really hurting right now.  They could really use our prayers.

As I have written about previously, our world is seemingly going crazy right now and nothing is stable anymore.  The earth is shaking, natural disasters are becoming worse, the economy is falling apart and America appears to be coming apart at the seams.

Unfortunately, I believe that things are going to become even more unstable in the months and years ahead.

So what do all of you believe?  Feel free to leave a comment with your opinion below….