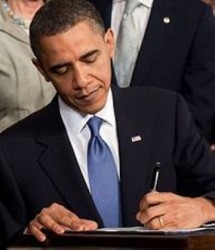 In a stunning admission of just how job-killing and business-crushing the new health care law really is, the Obama administration has issued a staggering total of 111 Obamacare waivers (and counting) so far. The list of the dozens of companies and organizations that have been approved for a waiver is very, very deeply buried on the website of the Department of Health & Human Services.  In fact, it takes six separate clicks to get to the list.  Some of the companies that have been granted waivers include McDonald’s, Darden Restaurants (owners of the Olive Garden and Red Lobster restaurant chains), Aetna, the United Federation of Teachers Welfare Fund in New York, and Dish Network.  These Obamacare waivers cover a total of 1.2 million Americans.  However, as news of these waivers spreads, it is inevitable that thousands more companies will want to apply.  In the end, tens of millions of Americans may be covered by health plans that have been exempted from Obamacare.  So can the rest of us get in on this action or is the Obama administration going to play favorites with these waivers?

So far, the Obamacare waivers have primarily been granted to companies that offer very limited health plans.  The Obama administration has apparently been afraid of the public relations nightmare that would result if dozens of companies suddenly started dropping health coverage for their employees.  The following is how the New York Times recently described what is going on with these waivers….

Last month, federal officials granted dozens of one-year waivers that were aimed at sparing certain employers, including McDonald’s, insurers and unions who offer plans that sharply limit the coverage they provide. These limited-benefit plans, also known as “minimeds,” fail to comply with new rules phasing out limits on how much policies will provide in medical care each year.

So do you want to get an Obamacare waiver for your own company?  Well, just over a week ago the Department of Health & Human Services published a set of new guidelines for those seeking to apply for a waiver.  As news of these waivers starts to spread they will likely get absolutely swamped with applications, so you better get yours in early.  In fact, it is being reported that the number of approved applications has tripled in just the last month alone.

But these waivers raise some very important questions.

-If Obamacare is such a great law, shouldn’t it apply equally to everybody?

-If Obamacare is going to cause firms to drop their “mini-med” health plans, shouldn’t all firms with “mini-med” plans be given a blanket exemption?

-Are all firms that apply for an Obamacare exemption going to be given one or will the Obama administration be playing favorites?

-Won’t firms that are granted these Obamacare waivers be given a very substantial competitive advantage over other firms in the same industry that do not have an exemption?

-What does it say about an administration when they grant dozens upon dozens of exemptions from a law that they spent months upon months selling to the American people as the ultimate solution to our health care problems?

The following is a recent video news report about these Obamacare exemptions…..

But perhaps you disagree.  Freedom of speech is a wonderful thing, and if you have a different perspective feel free to express it below….