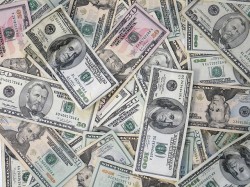 Ben Bernanke and the rest of the folks over at the Federal Reserve did not just wake up one day and decide that they wanted to start printing hundreds of billions of dollars out of thin air.  The truth is that the economic forces that have brought us to this point have taken decades to develop.  In the post-World War 2 era, when the U.S. economy has fallen into a recession, either the Federal Reserve would lower interest rates or the U.S. government would indulge in even more deficit spending to stimulate the economy.  But now, as you will see below, both of those alternatives have been exhausted.  In addition, we are now rapidly reaching the point where there are simply not enough lenders out there to feed the U.S. government’s voracious appetite for debt.  So now the Federal Reserve is openly printing hundreds of billions of dollars that will enable them to finance U.S. government borrowing, and (they hope) stimulate the U.S. economy at the same time.  Unfortunately, the rest of the world is not amused.  Nations such as China, Japan and many of the oil-exporting nations of the Middle East have accumulated a lot of U.S. dollars and a lot of U.S. Treasuries and they are not pleased that those investments are now being significantly devalued.

So how did we get to this point?  Why is the Federal Reserve printing money out of thin air in a desperate attempt to stimulate the economy? 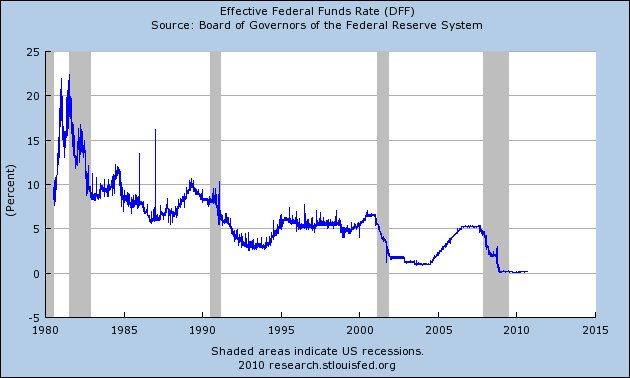 Another way that the U.S. economy has been “stimulated” over the past 30 years is through increased government spending.  The theory is that if the government spends more money, that will get more cash into the hands of the people and spark more economic activity.  That was the whole idea behind the “economic stimulus packages” that were pushed through Congress.  However, increased government spending always comes at a very high cost under our current system.  Government debt is now totally out of control.  As you can see below, the U.S. national debt has exploded from about one trillion dollars in 1980 to over 13 trillion dollars today.  Currently, there is very little appetite in Congress for more government spending to stimulate the economy, especially after the results of the November election.

Most Americans don’t realize it, but much of our incredible “prosperity” over the last 30 years has been fueled by the mountains of debt that we have accumulated.  Now U.S. government debt is exploding at an exponential rate…. 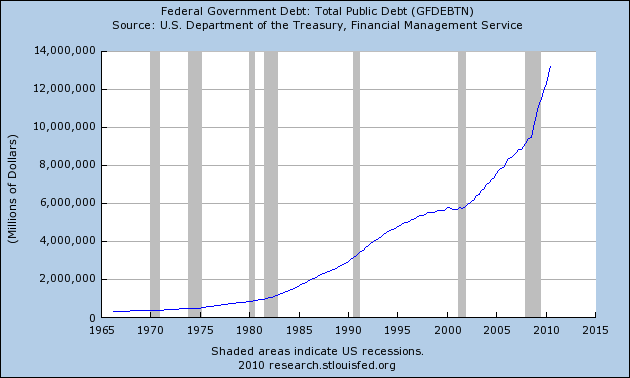 Sadly, the U.S. government has absolutely no self-control when it comes to spending money.  Our politicians are absolutely addicted to debt.

The truth is that the U.S. government just can’t seem to stop wasting money. One of the most comical news stories of the past few days involved the Recovery Independent Advisory Panel, which is a sub-committee of the larger Recovery Accountability and Transparency board.  This panel will be holding a meeting on November 22nd to discuss how to prevent “fraud, waste, and abuse” of economic stimulus funds.

So where will this meeting be held?

It is going to be held at the ultra-luxurious Ritz Carlton Hotel in Phoenix, Arizona.

Unfortunately, that leaves us with either doing nothing or with having the Federal Reserve print money out of thin air and shovel it into the economy.

Sadly, even after months of news headlines about quantitative easing, most Americans still do not understand what it is.  The following is a short video that is very humorous but that also does a good job of simply explaining what quantitative easing is and why it is bad for the U.S. economy….

For much more on why quantitative easing is so destructive, please see an article that I previously authored entitled “9 Reasons Why Quantitative Easing Is Bad For The U.S. Economy“.  The truth is that in an all-out effort to give the U.S. economy a short-term boost, the Federal Reserve is putting the entire world financial system in peril.

One group of prominent economists was so alarmed by this new round of quantitative easing that they recently wrote an open letter to Ben Bernanke warning of the dangers that flooding the economy with new money could create.  The following is an excerpt from the text of that open letter which was also posted on the website of the Wall Street Journal…..

We believe the Federal Reserve’s large-scale asset purchase plan (so-called “quantitative easing”) should be reconsidered and discontinued.  We do not believe such a plan is necessary or advisable under current circumstances.  The planned asset purchases risk currency debasement and inflation, and we do not think they will achieve the Fed’s objective of promoting employment.

We subscribe to your statement in the Washington Post on November 4 that “the Federal Reserve cannot solve all the economy’s problems on its own.”  In this case, we think improvements in tax, spending and regulatory policies must take precedence in a national growth program, not further monetary stimulus.

We disagree with the view that inflation needs to be pushed higher, and worry that another round of asset purchases, with interest rates still near zero over a year into the recovery, will distort financial markets and greatly complicate future Fed efforts to normalize monetary policy.

The Fed’s purchase program has also met broad opposition from other central banks and we share their concerns that quantitative easing by the Fed is neither warranted nor helpful in addressing either U.S. or global economic problems.

But it isn’t just a few prominent economists that are expressing disapproval for this new round of quantitative easing.  The truth is that almost every major industrialized nation has spoken out against all of this money printing by the Fed.  Meanwhile, Barack Obama continues to publicly defend Ben Bernanke and this new round of quantitative easing at every opportunity.

That is some “change you can believe in”, eh?

Unfortunately, the danger that quantitative easing poses to our financial system is much greater than most Americans realize.

In order for the world financial system to operate smoothly, the rest of the world much have a great deal of faith in the U.S. dollar and in U.S. Treasuries.  Ben Bernanke had promised Congress (and the rest of the globe) that the Federal Reserve would not monetize U.S. government debt and that he was going to keep the U.S. dollar strong.  But now Bernanke has broken his promises once again.  At this point Bernanke has lost a ton of credibility.  Unfortunately, Barack Obama and many of the key members of Congress continue to express unwavering support for him.

The rest of the world can see what is going on.  They are not stupid.  They are not going to keep pouring hundreds of billions into U.S. Treasuries if the Federal Reserve is going to “cheat” whenever economic conditions get a little tough.

If the day arrives when the rest of the globe completely loses faith in the U.S. dollar and in U.S. Treasuries, it is going to create a complete and total financial disaster – especially for the United States.