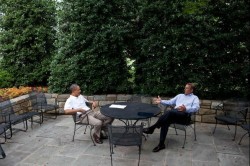 How does a country end up 15 trillion dollars in debt?  30 years ago, we were just a little over a trillion dollars in debt.  How in the world do supposedly rational people living in “the greatest nation on earth” allow themselves to commit national financial suicide by allowing government debt to explode like that?  It almost seems like there should be some sort of official ceremony in Washington D.C. to commemorate this achievement.  It really takes something special to be able to roll up 15 trillion dollars of debt.  To get to this level, we really had to indulge in some wild spending.  For example, did you know that the U.S. national debt grows by more than 2 million dollars every single minute?  All of this debt has fueled an unprecedented boom of prosperity for the last 30 years, but now that prosperity is drying up.  Today, there are over 45 million Americans that are on food stamps.  America is being deindustrialized at a blinding pace and there are not nearly enough jobs for everyone.  Poverty is exploding all over the nation, and millions of families have lost their homes to foreclosure.  Unfortunately, there are zero solutions on the horizon.  The leaders of both major political parties seem even more clueless right now than in past years.  We really could use some hope, but hope is in very short supply.

When evaluating the health of America’s economy, it is important not to look at the short-term numbers.  Rather, the key is to look at the long-term trends and the balance sheet numbers.

For example, if a mother and a father gave their teenage kids a bunch of credit cards and told them to go out and buy whatever they wanted, that would create a lot of “economic activity”, but it would also send that family to the poorhouse really quickly.

Well, we have basically done the same thing as a nation.  We are drowning in debt, and all of this debt is going to destroy us financially.

When you are running up a credit card, it can be a lot of fun and it can seem like there aren’t any consequences.

But when it comes to debt, there are always consequences.  The following is what former Republican Senator Alan Simpson (of the Simpson-Bowles Commission) recently had to say about the horrific debt crisis we are currently facing….

“It’s very simple. If you spend more than you earn, you lose your butt”

In the United States, we love to have the government spend money on all sorts of things, but we never want to pay for it.

So the debt just keeps piling up higher and higher.

Yes, we will always need a very powerful military, but we can have one without going broke in the process.

But an even larger problem is our rampant spending on social programs.

The following comes from a recent article by Janet Tavakoli….

In 1950 spending for social programs was only one percent of the total Federal Budget. As the economy grew, social programs expanded to include Social Security, Medicare, Medicaid, Food Stamps, Unemployment Compensation, Supplemental Security for the Disabled, and educational programs. In 1983 as the United States pulled out of an ugly recession and brought inflation under control, social programs consumed 26% of the budget. In fiscal year 2012, they’ll eat up an estimated 57% of the budget.

Tens of millions of Americans have become absolutely addicted to government money.  Nobody ever wants “their government benefits” to be cut, but nobody ever seems to want to have their taxes raised to pay for them.

To get a really good idea of how government transfer payments have absolutely skyrocketed over the years, just check out this chart.

Obviously, the course that we are on is not anywhere close to sustainable.

To say that the “war on poverty” was a failure would be a huge understatement.

The more money we seem to spend on social programs, the more that poverty seems to grow.

Food stamps are the modern equivalent of the old-fashioned bread lines.  The federal government is now feeding an almost unbelievable number of Americans.

According to the Wall Street Journal, nearly 15 percent of all Americans are now on food stamps.  That means that approximately one out of every seven Americans is dependent on the federal government for food.

That is not just a crisis – that is a total nightmare.

Well, we certainly shouldn’t let our people starve in the streets.

But handouts should only be a temporary solution.

What these people really need are good jobs.  Unfortunately, our “leaders” have created a business environment in this country that is incredibly toxic, and they have stood by as millions upon millions of good jobs have been shipped out of the country.  That is one of the reasons why I write about the insane trade policies of the globalists over and over and over.  The American people need to understand that globalization is going to mean a continuing loss of jobs for this country and it is going to result in the destruction of the middle class.

If we are not going to provide good jobs for American workers, then we are going to have to pay higher taxes in order to feed them and take care of them.

But what happens when the “safety net” breaks?

Even now, a lot of state and local governments all over the country are flat broke and they are cutting back on assistance for the poor.

The following is a brief excerpt from a recent article about this issue that was posted on the Fiscal Times….

For years, hundreds of thousands of people in dire straits – mentally or physically disabled, homeless and unemployed, ineligible for federal welfare, disability, or food subsidies – could generally count on state or local government largesse for modest handouts of cash to help scrape by. Under the rubric of “General Assistance,” these down-and-out Americans received modest payments – often no more than a few hundred dollars a month – to help defray the cost of necessities including rent, food, clothing, toilet paper, aspirin, phone cards, and bus tickets.

But in the midst of the worst recession of modern times and changing attitudes about the poor, many states have been gradually chipping away at general assistance programs or eliminating them altogether. Only 30 of 50 states currently offer any form of general assistance – down from 38 in 1989. And just this week, Washington State formally ended its “Disability Lifeline” program for an estimated 18,000 to 22,000 economically desperate residents.

Sadly, even more of us may be joining the ranks of the poor soon.  The layoffs just keep on coming.

Normally, most major store closings do not happen until after the holiday season.  You see, the reality is that most troubled retailers tend to want to bring in one more year of holiday sales before they finally shut the doors.  If you announce store closings before the holidays, that is going to make holiday shoppers less likely to shop at those stores.

So that is why some of the recent store closing announcements have been so troubling.

For example, it just came out that all 46 Syms and Filene’s Basement stores are closing.

So if this is what we are already seeing now, what is going to happen after the holidays?

So many jobs are being lost all around the nation.  These days, there is massive competition for just about any job that is available.

People are getting desperate.  They just want to be able to pay the bills and take care of their families.

The other day, thousands upon thousands of people lined up to apply for casino jobs in south Florida.  Scenes like this are going to become even more frequent in the years ahead.

The worst of the Republican candidates are actually at the top of the polls.  The cold, hard truth is that Romney, Cain and Perry are all clueless when it comes to the economy.

Of course you might as well call Barack Obama “Captain Clueless” when it comes to the economy.  Obama keeps giving great speeches about jobs while at the same time signing more “free trade” agreements that will send thousands more businesses and millions more jobs out of the country.  Even the CEOs on Obama’s jobs creation panel are shipping huge numbers of jobs out of the United States.

Obama gave a speech in Washington D.C. today that exemplified his clueless approach to the economy.  During the speech, Obama made the following statement….

“If Congress tells you they don’t have time, they got time to do it. We’ve been in the House of Representatives, what have you guys been debating? John, you’ve been debating a commemorative coin for baseball? You have legislation reaffirming that In God We Trust is our motto. That’s not putting people back to work. I trust in God, but God wants to see us help ourselves by putting people back to work”

First of all, Obama is not putting people back to work.  He has been helping big corporations ship jobs out of the country at a record pace.

Secondly, how does he know what God wants?

A lot of people actually think that the phrase “God helps those who help themselves” is in the Bible.

A while after the Obama speech, White House Press Secretary Jay Carney made matters worse when he told reporters the following….

But once again, there is no such verse in the Bible.

Okay, so quoting a “mystery verse” from the Bible is not that big of a thing at the end of the day, but this is yet another example of how the Obama administration just can’t seem to get anything right.

Look, everyone makes mistakes once in a while.  I know that I certainly do.

But when you are wrong about almost everything almost all of the time, that is a major problem.

Especially when you are the president of the United States.

But both political parties are to blame for the mess that we are in.  Budget deficits exploded during Republican administrations just like they have under the Democrats.

Both political parties are responsible for us being 15 trillion dollars in debt.

Both political parties are responsible for 45 million Americans being on food stamps.

Both political parties are responsible for the fact that there are not nearly enough good jobs.

If Barack Obama, Mitt Romney or Rick Perry is elected in 2012, we are just going to have more of the same.

America is running out of time.  If we are going to change course, we need to do it immediately.

It is so sad to watch what is happening to America.