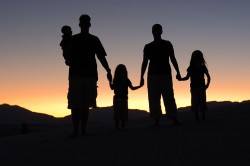 The following are 10 facts about the financial condition of American families that will blow your mind…..

#1 Only 58 percent of Americans have a job right now.

#2 Only 56 percent of Americans are currently covered by employer-provided health insurance.

#5 Only the top 5 percent of U.S. households have earned enough additional income to match the rise in housing costs since 1975.

#6 At this point, American families are approximately 7.7 trillion dollars poorer than they were back in early 2007.

#8 According to one study, approximately 21 percent of all children in the United States were living below the poverty line in 2010.

#9 Today, there are more than 44 million Americans on food stamps, and nearly half of them are children.

#10 According to Newsweek, close to 20 percent of all American men between the ages of 25 and 54 do not have a job at the moment.

Where in the world did all of the good jobs go?

Well, the truth is that millions of them have been shipped overseas.

Our politicians promised us that merging our economy with the economies of other nations where it is legal to pay slave labor wages to workers would not create more unemployment inside America.

They were dead wrong.

Now we are being told that we just need to accept a lower standard of living.

For example, billionaire Howard Marks says that it is time for all of us to just accept that the standard of living of American workers is inevitably going to decline to the level of the rest of the world….

“In addition to balancing the budget and growing the economy, I think we have to accept that the coming decades are likely to see U.S. standards of living decline relative to the rest of the world. Unless our goods offer a better cost/benefit bargain, there’s no reason why American workers should continue to enjoy the same lifestyle advantage over workers in other countries. I just don’t expect to hear many politicians own up to this reality on the stump.”

Are you willing to accept that?

Well, most Americans appear to be willing to accept this “new reality” because they keep sending most of the exact same bozos back to Washington D.C.

Meanwhile, the job losses continue to get worse.  As I wrote about the other day, as the U.S. economy has started to slow down again we are starting to see another huge wave of layoffs all over America.

It doesn’t take a genius to figure out where all of our jobs are going.  But unfortunately, most Americans don’t understand what is happening because neither the mainstream media nor our politicians are telling them the truth.

For much more on how millions of our good jobs are being shipped out of the country, please see another article I recently published entitled “How Globalism Has Destroyed Our Jobs, Businesses And National Wealth In 10 Easy Steps“.

But it is not just the globalization of the economy that is destroying our jobs.

The federal government bureaucracy has become so oppressive that it is amazing that anyone is still willing to hire workers in this day and age.

Hiring workers has become so complicated and so expensive that many small business owners want to avoid it at all cost.

For example, a small business owner identified as “007” recently left the following comment on one of my recent articles….

Speaking as a small employer, I would rather have a root canal than another employee. Let’s see. You first have to hire someone you trust without some labor lawyer suing you for some type of discrimination. Then you have OSHA to make sure your work place is safe. Then you have workmans compensation insurance, unemployment taxes, health insurance, liability insurance, now Obamacare. Oh be careful not to be deemed to have a “hostile work environment”. Then you have to negotiate the labor laws. The Department of Labor is constantly cranking out regulation.

Then you get the pleasure of paying payroll taxes both state and federal along with the required filing of a multitude of payroll forms. Miss filing or paying these taxes and you will be crushed with interest and penalties.

Of course, you are competing with businesses that can hire at a fraction of the cost of American Labor and with very little regulations. In this economy, no one in their right mind is hiring into this unstable and declining economy.

If business turns down all you have to worry about is laying off workers. Of course your unemployment insurance tax will go up 200% for years. Then you only have to then worry about a wrongful termination law suit.

The entire system is stacked against American workers.

If you are a blue collar worker, you should give up hope that things are going to get better.  The system has failed you.

You can stop waiting for the “good jobs” to come back.

They aren’t coming back.

That is one reason why I try to encourage everyone to become more independent of the system.

As our economic system continues to degenerate, Americans are going to become increasingly desperate.

Sadly, desperate people do desperate things.  Already we are starting to see signs that the fabric of American society is starting to be ripped to shreds.

There is a limit to how many people we can actually put in prison.  The reality is that the number of Americans in prison has nearly tripled since 1987.

Our prisons are already dangerously overcrowded.  As society falls apart, many communities will simply not be able to shove more people behind bars.

Even with our prisons stuffed to the gills, many of our largest cities continue to be transformed into absolute hellholes.

Well, they appear to be too busy fighting with each other and cheating on their wives to do much about our problems.

According to Politico, U.S. Representative David Wu is the latest member of Congress to be accused of a sex scandal….

Rep. David Wu has been accused of an “unwanted sexual encounter” with the teenage daughter of a longtime friend, the latest scandal to engulf the troubled Oregon Democrat.

This country is a complete and total mess.  Tens of millions of American families are flat broke and are about to slip into poverty.  Meanwhile, our politicians continue to prove that they are some of the most corrupt on the planet.

There are many out there that still believe that America has a bright future ahead.

It is getting really hard to see why anyone could possibly believe that.