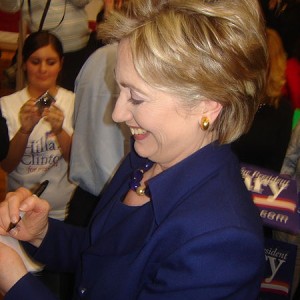 During a recent interview with Diane Sawyer, Hillary Clinton claimed that Bill and her were “dead broke” when they left the White House.  And then on Sunday, Hillary told the Guardian that they are not “truly well off” despite having earned about a hundred million dollars since leaving the White House and owning a couple of luxury homes.  This is yet another shocking example of how disconnected our political elite have become to the rest of the American people.  Perhaps Hillary Clinton is not “truly well off” when compared to some of the ultra-wealthy individuals that she rubs shoulders with at Democratic fundraisers, but according to numbers provided by the Social Security Administration, the Clintons would easily be in the top 0.01% of all income earners in America since leaving the White House.  So was Hillary Clinton joking, or is she really this out of touch with ordinary Americans?

Perhaps she thought that she could just tell a little white lie about how wealthy Bill and her truly are.  After all, 66 percent of Americans believe that when it says “natural” on a food label that it actually means something.  It seems like people will fall for almost anything these days.

Unfortunately for Clinton, people are not letting this one go.  In fact, CNN anchor Alison Kosik recently burst out laughing on air in response to Clinton’s claim that she is not “truly well off”…

If Hillary Clinton really does want to see what “dead broke” actually looks like, she should travel to some of the deeply impoverished communities in the heartland of America.

For instance, just consider what the BBC found when they interviewed two young kids being raised by a single mother in Iowa.

And of course Kaylie and Tyler are far from alone.  In fact, there are 49 million people that are dealing with food insecurity in America right now, and that number is growing.  For more sobering examples of crushing poverty in rural communities all over the United States, please see my previous article entitled “Vast Stretches Of Impoverished Appalachia Look Like They Have Been Through A War“.

But Hillary Clinton and politicians like her usually only interact with those kinds of people when it is time to win another election.

And that goes for most politicians from both political parties.

For the moment, life is good for the elite.  In places such as New York City, Washington D.C. and San Francisco, unemployment is relatively low and home prices are soaring.

But for the bottom half of the country, things just continue to get even worse.  Just consider the following numbers…

-According to one recent survey, 26 percent of all Americans have absolutely no emergency savings whatsoever.

–Approximately two-thirds of all Americans do not have enough money saved up to cover six months of expenses if an emergency arose.

-Close to half of those living in Detroit cannot pay their water bills.  It is being reported that the United Nations may step in to help.

-One report discovered that 60 percent of all children in the city of Detroit are living in poverty.

-One out of every three grocery store workers in the state of California is currently receiving public assistance.

-Even if you do have a job that does not mean that you are able to escape poverty in the United States today.  In fact, about one out of every four part-time workers in America is now living below the poverty line.

-According to numbers provided by Wal-Mart, more than half of their hourly workers make less than $25,000 a year.

-At this point, one out of every four American workers overall has a job that pays $10 an hour or less.

-It is a number that does not seem right, but it is actually true that half the country makes $27,520 a year or less from their jobs.

-Right now, one out of every six men in America in their prime working years (25 to 54) do not have a job.

-Half of all college graduates are still financially dependent on their parents even when they are two years out of school.

-One study discovered that nearly half of all public students in the United States come from low income homes.

-It is being projected that approximately 50 percent of all U.S. children will be on food stamps at some point in their lives before they reach the age of 18.

-It is hard to believe, but right now 1.2 million students that attend public schools in America are homeless.  That number has risen by an astounding 72 percent since the start of the last recession.

-According to a Feeding America hunger study, more than 37 million Americans are now being served by food pantries and soup kitchens.

-Numbers from the U.S. Census Bureau reveal that 49.2 percent of all Americans are now receiving benefits from at least one government program.

But if you still feel sorry for Hillary Clinton after reading all of this, there is a way that you can help.

For just pennies a day, you can contribute to “The Hillary Clinton Fund For Broke Politicians”.  In the video posted below, you can see how ordinary Americans respond when they are asked to donate to the fund…

Are we being too harsh on Hillary Clinton or does she deserve the flak that she has been getting?