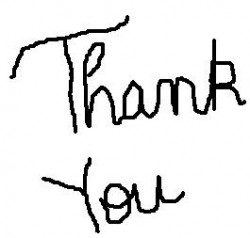 The Federal Reserve continues to pump up this “bubble economy” by recklessly printing money and by setting interest rates artificially low, and the U.S. Congress continues to stand aside and allow them to systematically destroy our economy.  The U.S. Congress could choose to end this madness at any time, but the truth is that Congress won’t even pass a law that would allow the American people to see what is going on over at the Federal Reserve.  Congress has voted down every single bill that would authorize a comprehensive audit of the Federal Reserve.  So the folks over at the Fed will continue to be able to destroy our future in secret.  In fact, back in July Federal Reserve Chairman Ben Bernanke actually sent five thank you letters to members of Congress that gave speeches on the floor of the U.S. House of Representatives encouraging their fellow lawmakers to vote against the bill to audit the Fed.  Since the U.S. Congress continues to refuse to do anything to hold the Federal Reserve accountable, the Fed will continue to print unprecedented amounts of money, it will continue to set interest rates insanely low and it will continue to pump up the greatest debt bubble in the history of the world.  Unfortunately, all debt bubbles eventually burst, and when this one does it is going to be a financial nightmare unlike anything we have ever seen before.

It was Politico that first broke the story about the thank you letters that Federal Reserve Chairman Ben Bernanke sent to five members of Congress back in July.  Bernanke acknowledged in the letters that there was never any worry that the “Audit the Fed” bill would actually get through Congress and be signed into law, but he was still extremely grateful that a number of members of Congress got up and publicly denounced the bill….

In July, the Fed chairman sent letters of gratitude to five Democratic members of Congress after they delivered speeches on the House floor urging fellow lawmakers to reject the “Audit the Fed” bill authored by retiring Texas Republican Ron Paul, the central bank’s chief antagonist.

Their efforts failed to defeat the bill, but they were not in vain, at least in Bernanke’s eyes.

“While the outcome of the vote was not in doubt, your willingness to stand up for the independence of the Federal Reserve is greatly appreciated,” Bernanke wrote in the letters, which were obtained by POLITICO through a Freedom of Information Act request.

So who did Bernanke send those letters to?

According to Politico, the thank you letters were delivered to U.S. Representatives Barney Frank, Elijah Cummings, Melvin Watt, Carolyn Maloney and Steny Hoyer.

By refusing to take action against the Federal Reserve, the U.S. Congress is silently endorsing their incredibly foolish policies.

Sadly, most Americans don’t even realize that the Federal Reserve has more control over our economy than anyone else does.  Most Americans that are actually concerned about politics are busy arguing over whether Obama or Romney will be better for the economy when it is actually the Fed that controls the levers of economic power.

The Federal Reserve played a major role in creating the housing bubble which severely damaged our financial system a few years ago.

As the chart below shows, after 9/11 the Federal Reserve dropped interest rates to historically low levels.  This allowed potential home buyers to get into much larger mortgages, and the big banks (which the Fed supposedly “regulates”) started making home loans to almost anyone with a pulse.

When interest rates started to go back up to normal levels in 2005, many home owners discovered that their adjustable rate mortgages started to become much more painful.  By 2007, we started to see a massive wave of mortgage defaults.  In 2008, the financial system crashed.

In response to the financial crisis of 2008, the Federal Reserve dropped interest rates to record low levels.  The effective federal funds rate is essentially at zero at this point, and the Fed has promised to keep interest rates at ultra-low levels all of the way into 2015.

But didn’t artificially low interest rates cause many of our problems in the first place?  The central planners over at the Fed are convinced that this is the right course for our economy, but can we really live in a zero interest rate bubble indefinitely?  Won’t this eventually cause even greater problems?…. 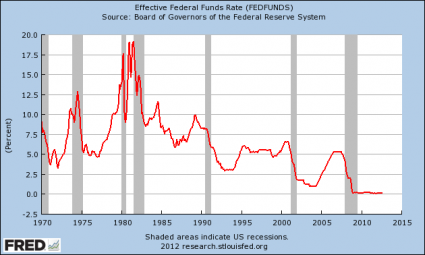 The Fed is also destroying our economy by recklessly printing money.

Once upon a time, the U.S. monetary base rose at a very steady pace.  But since the financial crisis of 2008, Ben Bernanke has been flooding the financial system with money and this has caused an unprecedented explosion in our money supply.

It isn’t too hard to see from this chart what the foolish “quantitative easing” policies of the Federal Reserve have done to our monetary base…. 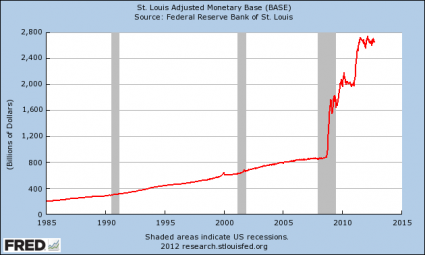 Fortunately a lot of the money from previous rounds of quantitative easing is being stashed by the big banks as “excess reserves” with the Federal Reserve, but when that money starts flowing into the “real economy” (and it will at some point), we are going to have a major problem on our hands.

But more than tripling our monetary base was not enough for Bernanke.  He recently announced yet another round of quantitative easing which he says will last indefinitely.

Basically, Bernanke is taking a sledgehammer to the U.S. dollar.  Our currency is being systematically destroyed, and the U.S. Congress is standing by and doing nothing.

For a lot more on why QE3 is going to be so incredibly destructive for our economy, please see the following five articles….

-“QE4? The Big Wall Street Banks Are Already Complaining That QE3 Is Not Enough”

-“Quantitative Easing Did Not Work For The Weimar Republic Either”

The Federal Reserve seems to think that printing more money is always the solution to whatever economic problems we are having.

But of course the Fed has been debasing our currency from the very beginning.  The entire Federal Reserve system is designed to create inflation.

From the time that the Federal Reserve was created back in 1913, the purchasing power of a U.S. dollar has declined from $1.00 to only about 4 pennies today.

And now Bernanke seems bound and determined to wipe out those last 4 pennies.

The Federal Reserve system was also designed to create a never ending spiral of government debt.

Today, the U.S. national debt is more than 5000 times larger than it was when the Federal Reserve was originally created in 1913.  This did not happen by accident…. 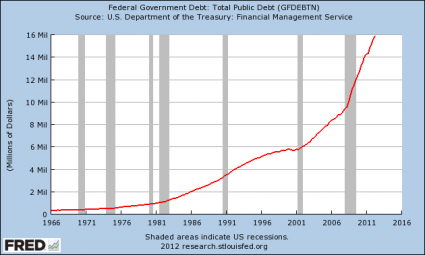 Not that our politicians should be off the hook for this.  They have been spending money as if there is no tomorrow.  Most of them have shown no concern at all about the legacy of debt that they are passing on to future generations of Americans.

If our politicians had been more responsible, the national debt would still be there, but it would be at a much more manageable level.

If we ever want to totally get rid of our national debt, the Federal Reserve must be abolished.

There is no other way.

And government debt is not the only bubble that the Federal Reserve has pumped up. 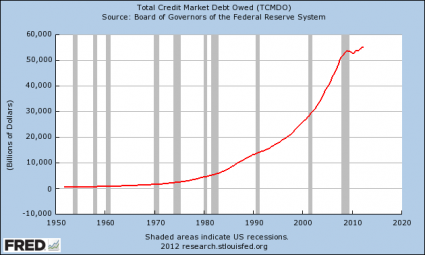 How in the world could we have been so foolish?

How in the world did we allow the total amount of debt in our country to get more than 27 times larger over the past 40 years?

As you can see, there was a slight “hiccup” in the bubble as a result of the financial crisis of 2008, but now it has started growing again.

At this point our entire financial system is based on debt, and if the debt bubble does not continue to expand the entire thing will collapse.

But no financial bubble grows forever.  History has proven that to us over and over.

At some point this bubble is going to burst.

History has shown us that financial collapse is often accompanied by social upheaval.   Many times it even leads to war.

So what will happen to America when our economic collapse happens?

How would you answer it? 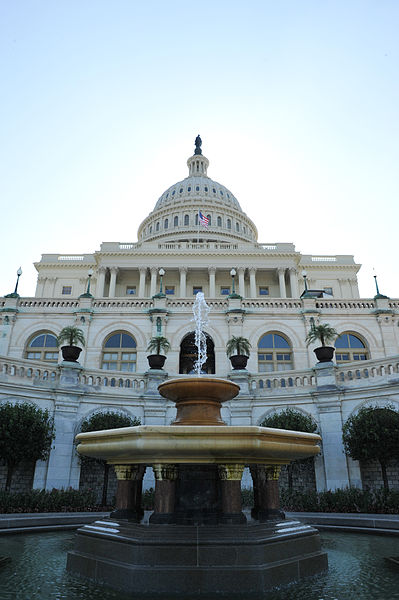