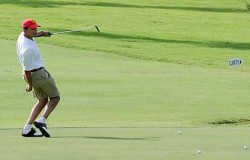 So that was what we have been waiting for?  That was what all the hype was about?  With a little over a year until the next election, that was the “best shot” that Obama has for fixing the unemployment crisis in this country?  The Obama Jobs Plan (also now known as “the American Jobs Act”) is going to cost $447 billion and it is going to do next to nothing to create more jobs.  Many Americans were hoping for something bold and new from Obama, but instead what they got was a bad joke.  When Obama stated that there is “nothing radical in this bill”, he was not kidding.  Instead of addressing the fundamental issues that are causing job loss, Obama wants us to spend half a trillion dollars on measures that will only create a very small number of jobs.  Sadly, much of what Obama is proposing actually consists of huge bribes to middle class voters.  Obama is trying to keep his own job, and he appears willing to pile up even more debt in order to make that happen.

During his speech to the nation, Obama instructed Congress to either “pass this jobs bill” or to “pass it right away” 16 different times.  Obama obviously feels very strongly about his jobs plan.

But will it work?  Let’s take a few moments to break it down.  The following are 10 reasons why the Obama jobs plan is a bad joke….

#1 The payroll tax cuts are going to cost more than anything else in the plan, but they will do very little to create jobs.

Just take a look at what is happening right now.  Have the current payroll tax cuts done much?  No, the unemployment rate is still over 9 percent.

Yes, the new payroll tax cuts would be deeper and they would put some more money into the pockets of American workers.

Businesses would certainly welcome the fact that their payroll taxes would be cut, but it probably will not entice many of them to hire more people.

Because they know that the tax cut would only be temporary.  After just a handful of months the payroll tax would go right back to where it was before.

Businesses are not often moved by temporary tax cuts.  If you want tax cuts to really move business, then you need to make them permanent.

So does that mean that I am against these payroll tax cuts?

Absolutely not.  I very much hope that payroll taxes get cut.  I am all in favor of the government taking as little money from me as possible.

Look, if the federal government is going to destroy our financial system anyway, I would much rather keep as much of my own money in my own pockets as possible.

So yes, I am all in favor of payroll tax cuts.

But no, those cuts are not going to do much to create jobs.  If payroll tax cuts were going to create a lot more jobs we would already see it happening.

However, if this is passed it will be a great bribe to voters because millions of Americans will see their paychecks go up and when that happens they will think of Obama.

#2 Obama’s plan to extend unemployment assistance is going to cost about $49 billion but it is not going to do much to create any jobs.

Back in 2009, Congress first authorized an extension of unemployment benefits to a maximum of 99 weeks.  Five times since then Congress has reauthorized this extension.

So has this made a huge difference in the number of unemployed?

Of course not.  If it was going to make a huge difference it would have done so already.

Yes, these extended benefits are easing the suffering of those that are out of work, and yes they are giving them a little extra money to spend, but let’s not pretend that extending unemployment benefits is going to create a whole bunch of new jobs.

Hopefully this will work out a whole lot better than the “shovel ready” jobs that Obama promised previously.

Yes, infrastructure all over this country is rapidly falling apart.  Yes, it is a legitimate function of government to invest in public infrastructure.

But no, this is not going to create a ton of new jobs.  It will create a few jobs, but it will also add to our rapidly growing national debt.

#4 According to the fact sheet on the jobs plan released by the Obama administration, direct financial aid to state governments will prevent up to 280,000 teacher layoffs, and it will also help states retain more police and firefighters.

Essentially, this is a “backdoor bailout” for the states.  Yes, it will be a good thing if teachers, police and firefighters are able to keep their jobs.  However, preventing job losses is not the same as creating new jobs.  So this may help reduce the bleeding a little bit, but it is not going to turn the overall employment situation around.

#5 There are a bunch of other minor things in Obama’s proposal such as “modernizing” public schools and helping more Americans refinance their mortgages, but it is not entirely clear how those things will help create a lot more jobs.

Meanwhile, there are a whole lot of things that the Obama jobs plan does not do….

#6 The Obama jobs plan does next to nothing to prevent jobs from being shipped out of the country.

As I wrote about the other day, right now the way the system is designed makes it highly profitable to send American jobs overseas….

Obama is doing absolutely nothing to address these imbalances.

#7 The Obama jobs plan does nothing about the unfair trade practices that are absolutely killing America on the global economic stage.

As I wrote about the other day, other nations are manipulating currency rates, they are openly stealing technology from our companies, they allow their workers to be paid slave labor wages and they put up huge barriers to goods and services from the United States and we let them get away with it.  Our trade policies are absolutely insane, and the way that the new “global economy” is structured guarantees that U.S. businesses are going to be operating at a huge disadvantage.  The following are just a few more of the reasons why foreign firms have a huge advantage over U.S. companies….

In 2011 we are going to end up with a trade deficit that is probably going to be well in excess of half a trillion dollars.  According to one estimate, if the trade deficit was totally eliminated it would create 8.4 million new jobs inside the United States.

So why isn’t Barack Obama proposing to do something about all of this?

#8 The Obama jobs plan does nothing about the gigantic mountains of ridiculous regulations that are absolutely killing small business in this country.  According to the Heritage Foundation, 75 new major regulations that have cost U.S. businesses more than 40 billion dollars have been passed since Barack Obama first took office.

Right now there is a good chance that you are breaking dozens of federal regulations without even knowing it.

All of this regulation is crushing our businesses and is making us much less competitive in the global marketplace.

Yes, there will always be a need for common sense regulations on business activity.  But what we have right now is an absolute madhouse.

#9 The Obama jobs plan does nothing about the negative effects of Obamacare.  Obamacare is going to absolutely slaughter U.S. businesses.  Look, when most other nations do not burden their businesses with providing health care and we force our businesses to comply with the nightmare that Obamacare represents, who do you think has the advantage?

The other day, I noted some of the effects that Obamacare is already having on the U.S. business community….

According to a recent report from the National Federation of Independent Business, one out of every eight small businesses in the United States have either already had or expect to have the health insurance plans for their employees terminated by the health insurance companies because of Obamacare.  Another recent survey of mid-size and large businesses found that nearly ten percent of them plan to stop offering health insurance coverage to workers once Obamacare insurance exchanges begin in 2014, and another 20 percent are not sure if they will continue to offer coverage or not.  Our health care system is deeply broken and the ones that keep getting the short end of the stick are average Americans.

If Obama was serious about putting Americans back to work, he would do something about Obamacare.

But he is not going to do that, is he?

#10 The Obama jobs plan makes our national debt worse.  Yes, Obama insists that his plan will be “100%” paid for, but he has not told us how it will be paid for.

Exactly where in the world is he going to get an extra half a trillion dollars next year?

Obama probably intends to propose some tax increases that he knows that the Republicans would never, ever agree to.

So, no, Obama’s proposals will not be paid for.

We cannot afford to pile huge amounts of additional debt on to the backs of our children and our grandchildren.  What we have already done to them is deeply, deeply criminal.

In the end, some of Obama’s proposals will probably get passed, none of them will be paid for, our debt will get even bigger, and the fundamental reasons for our job losses will remain unaddressed.

So hopefully you can understand why I consider the Obama jobs plan to be a really bad joke.

Tonight, millions of Americans will be sleeping in seedy motels, in their cars or in tent cities.

Just check out these pictures from New Jersey.  Can you believe that some hard working Americans actually have to live like that?

We had the greatest economy that the world has ever seen.

Now Obama has come up with a “plan” that will not fix any of our fundamental problems but that will get us into a whole lot more debt.

Please excuse me if I am less than thrilled.