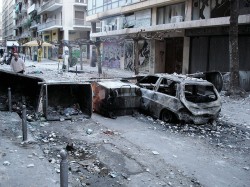 When the economy of a nation collapses, almost everything changes.  Unfortunately, most people have never been through anything like that, so it can be difficult to know how to prepare.  For those that are busy preparing for the coming global financial collapse, there is a lot to be learned from the economic depression that is happening right now in Greece.  Essentially, what Greece is experiencing is a low level economic collapse.  Unemployment is absolutely rampant and poverty is rapidly spreading, but the good news for Greece is that the global financial system is still operating somewhat normally and they are getting some financial assistance from the outside.  Things in Greece could be a whole lot worse, and they will probably get a whole lot worse before it is all said and done.  But already things have gotten bad enough in Greece that it gives us an idea of what a full-blown economic collapse in the 21st century may look like.  There are reports of food and medicine shortages in Greece, crime and suicides are on the rise and people have been rapidly pulling their money out of the banks.  Hopefully this article will give you some ideas that you can use as you prepare for the economic chaos that will soon be unfolding all over the globe.

The following are 10 things that we can learn about shortages and preparation from the economic collapse in Greece….

Most people assume that they will always be able to run out to their local supermarket or to Wal-Mart and get all of the supplies they need.

Unfortunately, that is a false assumption.  The truth is that our food distribution system is extremely vulnerable.

In Greece, many people are starting to totally run out of food.  Even some government institutions (such as prisons) are now reporting food shortages.  The following was originally from a Greek news source….

The financing for many prisons has decreased to a minimum for some months now, resulting in hundreds of detainees being malnourished and surviving on the charity of local communities.

The latest example is the prison in Corinth where after the supply stoppage from the nearby military camp, the prisoners are at the mercy of God because, as reported by prison staff, not even one grain of rice has been left in their warehouses. When a few days earlier the commander of the camp announced to the prison management the transportation stoppage, citing lack of food supplies even for the soldiers, he shut down the last source of supply for 84 prisoners. The response of some Corinth citizens was immediate as they took it upon themselves to support the prisoners, since all protests to the Justice ministry were fruitless.

If you are dependent on medicine in order to survive, you might want to figure out how you are going to get by if your supply of medicine is totally cut off someday.

In Greece, medicine shortages have become a massive problem.  The following is from a recent Bloomberg article….

Mina Mavrou, who runs a pharmacy in a middle-class Athens suburb, spends hours each day pleading with drugmakers, wholesalers and colleagues to hunt down medicines for clients. Life-saving drugs such as Sanofi (SAN)’s blood-thinner Clexane and GlaxoSmithKline Plc (GSK)’s asthma inhaler Flixotide often appear as lines of crimson data on pharmacists’ computer screens, meaning the products aren’t in stock or that pharmacists can’t order as many units as they need.

“When we see red, we want to cry,” Mavrou said. “The situation is worsening day by day.”

The 12,000 pharmacies that dot almost every street corner in Greek cities are the damaged capillaries of a complex system for getting treatment to patients. The Panhellenic Association of Pharmacists reports shortages of almost half the country’s 500 most-used medicines. Even when drugs are available, pharmacists often must foot the bill up front, or patients simply do without.

#3 When An Economy Collapses, So Might The Power Grid

Try this some time – turn off all power to your home for 24 hours and try to live normally.

Sadly, most people simply do not understand just how dependent we are on the power grid.  Without power, all of our lives would change dramatically.

In Greece, authorities are warning of an impending “collapse” of the power grid.  If it goes down for an extended period of time in Greece, the consequences would be catastrophic….

Greece’s power regulator RAE told Reuters on Friday it was calling an emergency meeting next week to avert a collapse of the debt-stricken country’s electricity and natural gas system.

“RAE is taking crisis initiatives throughout next week to avert the collapse of the natural gas and electricity system,” the regulator’s chief Nikos Vasilakos told Reuters.

RAE took the decision after receiving a letter from Greece’s natural gas company DEPA, which threatened to cut supplies to electricity producers if they failed to settle their arrears with the company.

If the power grid goes down, you will soon no longer have clean water coming out of your faucets.  That is one of the reasons why it is absolutely imperative that the power grid stay operable in Greece.

Sadly, most people don’t understand just how vulnerable our water system is.  In a previous article, I quoted from a report that discussed how rapidly our water supply would be in jeopardy in the event of a major transportation disruption….

What will you do when clean water stops coming out of your faucets?

Most people have become very accustomed to using either debit cards or credit cards for almost everything.

But what would happen if the financial system locked up for a period of time and you were not able to use them?

#6 Crime, Rioting And Looting Become Commonplace During An Economic Collapse

Big corporations are already making extensive plans for how to protect their stores in the event that Greece switches from the euro to the drachma.

The following is from a recent Reuters article….

The planning, says Dixons chief Sebastian James, may look alarmist but it’s good to be prepared.

Company bosses around Europe agree. As the financial crisis in Greece worsens, companies are getting ready for everything from social unrest to a complete meltdown of the financial system.

#7 During A Financial Meltdown Many Average Citizens Will Start Bartering

During this economic depression, alternative currencies have already been popping up in Greece.

When things fall apart on a global scale, will you have things to barter for the things that you need?

#8 Suicides Spike During An Economic Collapse

Many people think of images of people jumping out of buildings.

Well, something similar has been happening in Greece.  Suicide statistics in Greece have been absolutely soaring during the last couple of years.

Once prosperity disappears, many people feel as though life is not worth living anymore.

#9 Your Currency May Rapidly Lose Value During An Economic Crisis

Just remember what happened in Germany during the Weimar Republic and what has happened recently in places like Zimbabwe.

The truth is that it can happen anywhere.

Right now, Greeks are pulling their money out of the banks because they are worried that their euros will be turned into drachmas which would rapidly lose value.

If I was living in Greece I would definitely be concerned about that.  The return of the drachma seems to get closer with each passing day.  Just check out these screenshots.

Has the government of Greece come to the rescue of all of those that are deeply suffering right now?

Of course not.  The truth is that the Greek government can barely take care of itself at the moment.

History has shown us that governments simply cannot be counted on when things hit the fan.

Just remember what happened during the aftermath of Hurricane Katrina.

In the end, the only one that can be counted on to take care of you and your family is you.

So you better start preparing.

Unfortunately, as I wrote about the other day, time is rapidly running out for the global financial system.

Even some of the top economic officials in the world are warning that another major crisis could be on the way.

Just check out what World Bank President Robert Zoellick said the other day….

He also compared a potential exit of Greece from the eurozone to the collapse of Lehman Brothers back during the last financial crisis….

“If Greece leaves the eurozone, the contagion is impossible to predict, just as Lehman had unexpected consequences.”

So what are some things that the average person can do to get prepared?

Well, a recent article on SHTFplan.com entitled “The List: A to Z Survival for the Abysmal Times Ahead” contains hundreds of ideas for preparing for the chaotic economic environment that we are heading into.

Preparation is going to look different for every family.  No two situations are exactly the same.

Or you could be like all of those that laughed at Noah while he was building that big boat.

In the end, things did not work out too well for those folks. 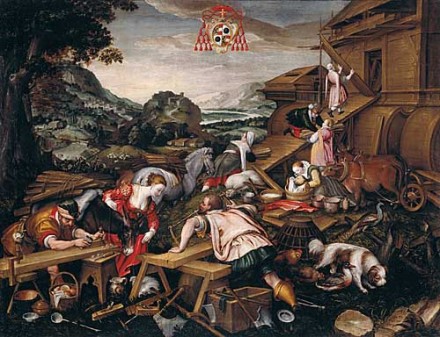