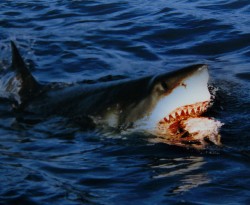 Can you smell it?  There is blood in the water.  Global financial markets are in turmoil.  Banking stocks are getting slaughtered right now.  European bond yields are absolutely soaring.  Major corporations are announcing huge layoffs.  The entire global financial system appears to be racing toward another major crisis.  So could we potentially see a repeat of 2008?  Sadly, when the next big financial crisis happens it might be worse than 2008.  Back in the middle of 2008, the U.S. national debt was less than 10 trillion dollars.  Today it is over 14 trillion dollars. Back in 2008, none of the countries in the EU were on the verge of financial collapse.  Today, several of them are.  This time if the global financial system starts falling apart the big governments around the world are not going to be able to do nearly as much to support it.  That is why what is happening right now is so alarming.  As signs of weakness spread, the short sellers and the speculators are starting to circle.  They can smell the money.

Back in 2008, bank stocks led the decline.  Today, that appears to be happening again.  The “too big to fail” banks are getting absolutely pummeled right now.  Most people don’t have much sympathy for the banksters, but if we do see a repeat of 2008 they are going to be cutting off credit and begging for massive bailouts once again, and that would not be good news for the economy.

In Europe, the EU sovereign debt crisis just seems to get worse by the day.  Bond yields for the PIIGS are going haywire.  The higher the yields go, the worse the crisis is going to get.

Meanwhile, as I have written about previously, a bad mood has descended on world financial markets. Pessimism is everywhere and fear is spreading.  The short sellers and the speculators are eager to jump on any sign of weakness.  Investors all over the globe are extremely nervous right now.

Well, nobody knows for sure.

But things certainly do not look good.

The following are 18 signs that global financial markets smell blood in the water….

#2 So far this year, Bank of America stock is down about 27 percent.

#3 Bloomberg is reporting that Bank of America may be forced to increase its capital cushion by 50 billion dollars.

#4 Shares of Goldman Sachs and Morgan Stanley are near two year lows.

#6 Moody’s recently warned that it may be forced to downgrade the debt ratings of Bank of America, Citigroup and Wells Fargo.

#7 Barclays Capital, Goldman Sachs, Bank of America, JPMorgan Chase and Morgan Stanley are all either considering staff cuts or are already laying workers off.

#8 The deputy European director of the International Monetary Fund says that the Greek debt crisis is “on a knife’s edge“.

#9 Moody’s has slashed Ireland’s bond rating all the way to junk status.

#11 Shares of Italy’s largest bank dropped by a whopping 6.4% on Monday.

#12 On Monday, the yield on 10 year Italian bonds was the highest it has been since the euro was adopted.

#13 On Monday, the yield on 10 year Spanish bonds was also the highest it has been since the euro was adopted.

#14 Shares of Germany’s largest bank fell by a staggering 7% on Monday and are down a total of 22% so far this month.

#15 Citigroup’s chief economist, William Buiter, says that without direct intervention by the ECB there is going to be a wave of sovereign defaults across Europe….

“Nothing stands in the way of multiple sovereign defaults except the ECB: they are the only game in town, there is nothing else”

#16 Cisco has announced plans to axe 16 percent of its workers.

#17 Borders Group has announced that it will be liquidating all remaining assets.  That means that 399 stores will be closed and 10,700 workers will lose their jobs.

#18 During times of great crisis, many investors seek safe havens for their money.  On Monday, the price of gold shot past $1600 an ounce.

These are not normal financial times.  The worldwide debt bubble is starting to burst and nobody is quite sure what is going to happen next.  Certainly we are going to continue to see financial authorities all over the world do their best to keep the system going.  But as we saw in 2008, things can spiral out of control very quickly.

Just remember, back at the beginning of 2008 very few people would have ever imagined that the biggest financial institutions in America would be begging for hundreds of billions of dollars in bailouts by the end of that year.

When confidence disappears, the game can change very quickly.  To the vast majority of economists it would have been unimaginable that the yield on 2 year Greek bonds would be over 35 percent in mid-2011.

The entire global financial system is a house of cards built on a foundation of sand.  It is more vulnerable today than it has been at any other time since World War II.  When a couple of major dominoes fall, it is likely to set off a massive chain reaction.

The global financial system of today was not designed with safety and security in mind.  It was designed for greedy people to be able to make as much money as possible as quickly as possible.  The banksters don’t care about the greater good of mankind.  What they care about is making huge piles of cash.

There is way too much risk, way too much debt and way too much leverage in the global financial marketplace.  You would have thought that 2008 should have been a major wake up call for financial authorities around the world, but very few significant changes have been made since that time.

The financial news is just going to keep getting worse.  This financial system is simply unsustainable.  It is fundamentally unsound.  The reality is that financial bubbles cannot keep expanding forever.  Eventually they must burst.

Hopefully the next wave of the financial collapse is not about to hit us.

Hopefully the entire global financial system is not on the verge of a major implosion.

But you might want to get prepared just in case.