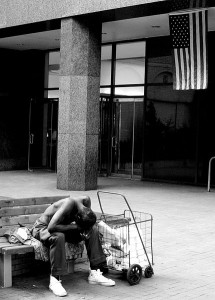 Did you know that the number of Americans on welfare is higher than the number of Americans that have full-time jobs?  Did you know that 1.2 million public school students in the U.S. are currently homeless?  Anyone that uses the term “economic recovery” to describe what is happening in the United States today is being deeply insulting to the nearly 150 million Americans that are considered to be either “poor” or “low income” at this point.  Yes, things are great in New York City, Washington D.C. and San Francisco, but almost everywhere else economic conditions continue to steadily get worse.  The gap between the wealthy and the poor is at a level that America has never seen before, and this is beginning to create a “Robin Hood mentality” that could cause a tremendous amount of social chaos in the years ahead.  Anger at the “haves” in America continues to rise at a very alarming pace, and the “have nots” are becoming increasingly desperate.  At some point all of this anger is going to boil over, and you won’t want to be anywhere around major population centers when that happens.  Despite unprecedented borrowing by the federal government in recent years, and despite unprecedented money printing by the Federal Reserve, poverty in the United States keeps getting worse with each passing year. The following are 29 incredible facts which prove that poverty in America is absolutely exploding…

1. What can you say about a nation that has more people getting handouts from the federal government than working full-time?  According to the latest numbers from the U.S. Census Bureau, the number of people receiving means-tested welfare benefits is greater than the number of full-time workers in the United States.

2. New numbers have just been released, and they show that the number of public school students in this country that are homeless is at an all-time record high.  It is hard to believe, but right now 1.2 million students that attend public schools in America are homeless.  That number has risen by 72 percent since the start of the last recession.

3. When I was growing up, it seemed like almost everyone was from a middle class home.  But now that has all changed.  One recent study discovered that nearly half of all public students in the United States come from low income homes.

4. How can anyone deny that we are a socialist nation when half the people are getting money from the federal government each month?  According to the most recent numbers from the U.S. Census Bureau, 49.2 percent of all Americans are receiving benefits from at least one government program.

5. Signs of increasing poverty are even showing up in the wealthiest areas of the nation.  According to the New York Post, New York subways are being “overrun with homeless“.

7. The gap between the rich and the poor in the United States is at an all-time record high.  The wealthy may not consider this to be much of a problem, but those at the other end of the spectrum are very aware of this.

8. The “working poor” is one of the fastest growing segments of the U.S. population.  At this point, approximately one out of every four part-time workers in America is living below the poverty line.

9. According to numbers provided by Wal-Mart, more than half of their hourly workers make less than $25,000 a year.

10. A recent Businessweek article mentioned a study that discovered that 300 employees at one Wal-Mart in Wisconsin receive a combined total of nearly a million dollars a year in public assistance…

“A decent wage is their demand—a livable wage, of all things,” said Representative George Miller (D-Calif.). The problem with companies like Wal-Mart is their “unwillingness, not their inability, to pay that wage,” he said. “They hand off the difference to taxpayers.” Miller was referring to a congressional report (PDF) released in May that calculated how much Walmart workers rely on public assistance. The study found that the 300 employees at one Supercenter in Wisconsin required some $900,000 worth of public assistance a year.

11. The stock market may be doing great (for the moment), but incomes for average Americans continue to decline.  In fact, median household income in the United States has fallen for five years in a row.

12. The quality of the jobs in America has been steadily dropping for years.  At this point, one out of every four American workers has a job that pays $10 an hour or less.

13. According to a Gallup poll that was recently released, 20.0% of all Americans did not have enough money to buy food that they or their families needed at some point over the past year.  That is just under the record of 20.4% that was set back in November 2008.

14. Young adults are particularly feeling the sting of poverty these days.  American families that have a head of household that is under the age of 30 have a poverty rate of 37 percent.

16. The number of Americans on food stamps now exceeds the entire population of Spain.

18. We are told that we live in the “wealthiest nation” on the planet, and yet more than one out of every four children in the United States is enrolled in the food stamp program.

19. The average food stamp benefit breaks down to approximately $4 per person per day.

20. It is being projected that approximately 50 percent of all U.S. children will be on food stamps before they reach the age of 18.

21. Today, approximately 17 million children in the United States are facing food insecurity.  In other words, that means that “one in four children in the country is living without consistent access to enough nutritious food to live a healthy life.”

22. It may be hard to believe, but approximately 57 percent of all children in the United States are currently living in homes that are considered to be either “low income” or impoverished.

24. In Miami, 45 percent of all children are living in poverty.

25. In Cleveland, more than 50 percent of all children are living in poverty.

26. According to a recently released report, 60 percent of all children in the city of Detroit are living in poverty.

27. According to a Feeding America hunger study, more than 37 million Americans are now being served by food pantries and soup kitchens.

28. The U.S. government has spent an astounding 3.7 trillion dollars on welfare programs over the past five years.

29. It has been reported that 4 out of every 5 adults in the United States “struggle with joblessness, near-poverty or reliance on welfare for at least parts of their lives”.

These poverty numbers keep getting worse year after year no matter what our politicians do.

So is there anyone out there that would still like to argue that we are in an “economic recovery”?

And as I mentioned above, the “have nots” are becoming increasingly angry at the “haves”.  For example, just check out the following excerpt from a recent New York Post article…

The maniac who butchered a Brooklyn mom and her four young kids confessed that he did it because he was jealous of their way of life, a police source told The Post on Sunday.

“The family had too much. Their income (and) lifestyle was better than his,” the source said.

The bloody suspect was caught holding the kitchen knife he used during the Saturday night rampage inside the Sunset Park apartment where he had been staying with the victims, the source added.

Sadly, this was not an isolated incident.  All over the western world, a “Robin Hood mentality” is growing.  This is something that I am so concerned about that I made it a big part of my new book.  At this point, even wealthy Hollywood-types such as actor Russell Brand are calling for a socialist-style “revolution” and a “massive redistribution of wealth“.

Perhaps Brand does not understand that what he is calling for would mean redistributing most of his own wealth away from him.

When the next major wave of the economic collapse strikes, I fear that all of this anger and frustration that are growing among the poor will boil over in some very frightening ways.  I believe that we will see a huge spike in crime and that we will eventually see communities all over America looted and burning.

But I am not the only one that is thinking along these lines.  A new National Geographic Channel movie entitled “American Blackout” attempts to portray the social chaos that could erupt in the event of an extended national power failure…

American Blackout, National Geographic Channel’s two-hour, edge-of-your-seat movie event imagines the story of a national power failure in the United States caused by a cyberattack — told in real time, over 10 days, by those who kept filming on cameras and phones. You’ll learn what it means to be absolutely powerless.

You can view a clip of the film that was made available by NatGeo for the SHTFplan.com community right here.

What would you do if something like that happened to you?

How would you handle desperate, hungry people at your fence asking for food?

And what if those people were armed and were not “asking nicely” for your food?

Don’t ignore what is happening in America right now.  It is setting the stage for some very chaotic times.

Get ready while you still can.