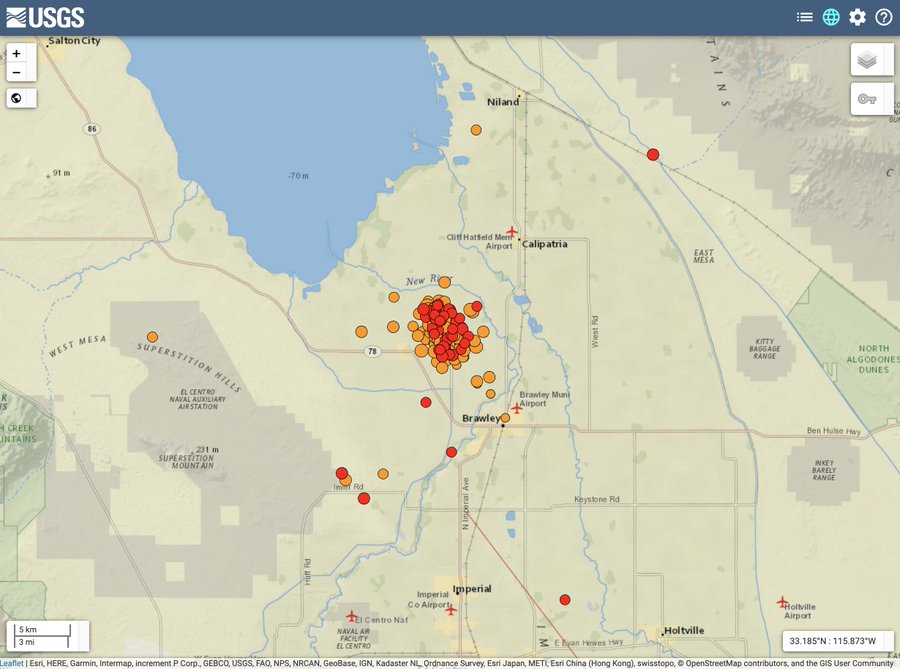 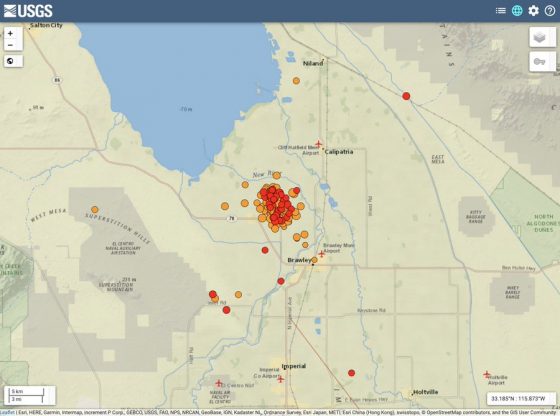 Over the last few days, a swarm of almost 600 earthquakes has shaken southern California, and a lot of people are becoming extremely concerned about what will happen next.  In fact, if you go on Twitter right now you will find a tremendous amount of speculation that “the Big One” could be coming.  The experts are trying to calm the general public by assuring them that it is probably not likely that “the Big One” is imminent, but they don’t know for sure.  Forecasting earthquakes is not like forecasting the weather, and experts will continue to tell us that a major event is not likely until the day when one finally happens.

According to the Los Angeles Times, this current swarm of quakes has been centered “around the town of Westmoreland in Imperial County”…

The Southern California Seismic Network recorded nearly 600 earthquakes, the smallest a magnitude 1.1, as of 6 a.m. Thursday, according to a report from the project by Caltech and the U.S. Geological Survey.

Most of the rumbling has been relatively minor, but during a period of less than three hours on Wednesday there were 45 earthquakes of at least magnitude 3.0…

‘In just 2.5hr Westmorland swarm has had 45 quakes of M≥3.0. One of the largest swarms we have had in the Imperial Valley – and it is historically the most active swarms in SoCal,’ seismologist Dr Lucy Jones wrote on Twitter on Wednesday night.

A magnitude 4.9 quake has been the largest event so far, and we shall see what else happens over the next several days.

According to Dr. Lucy Jones, this earthquake swarm has occurred along some small faults “that connect the San Andreas and Imperial faults”…

None of the earthquakes that have been happening in the Imperial Valley are anywhere near the San Andreas fault. They are in the Brawley Seismic Zone – a network of small faults that connect the San Andreas and Imperial faults.

This is an area that has had some pretty serious earthquake swarms in the past.

The quake swarms “are located in an area of diffuse seismic activity between the San Andreas fault in the north and the Imperial fault to the south,” the USGS says. Previous swarms in the area happened in 1981 and 2012.

“Past swarms have remained active for 1 to 20 days, with an average duration of about a week,” the USGS reported.

Obviously the swarms of 1981 and 2012 did not produce something much larger, and hopefully this one will not either.

But the USGS is warning that there is a “very small probability” that a quake of magnitude 7.0 or above could potentially happen…

‘The ongoing swarm could trigger an earthquake significantly larger than the M4.9 that occurred on the 30 September (i.e., M7.0 and above),’ they warned.

‘While this is a very small probability, if such an earthquake were to occur, it would have serious impacts on communities nearby and would be followed by aftershocks that would increase the number of smaller earthquakes per day.’

However, as I noted above, the truth is that they don’t really know.

None of the experts has any way to reliably forecast earthquakes in advance, and someday when “the Big One” finally strikes there may not be any sort of advance warning at all.

But the experts do believe that it is inevitable that eventually “the Big One” will arrive, and one particularly alarming study concluded that the full length of the San Andreas fault could potentially “unzip all at once”….

Could you imagine the utter devastation that such an event would cause?

Scientists have discovered that enormous earthquakes in the distant past caused the ground to sink by as much as three feet in some portions of southern California, and some scientists have warned that if such an event happened today that “it could plunge large parts of California into the sea almost instantly”…

If you have read my new book, you already understand why I keep relentlessly warning people about these things.

Unfortunately, one day the time for warning will be over and disaster will strike.  According to Cal State Fullerton professor Matt Kirby, a big enough quake could cause vast stretches of southern California to sink dramatically “relatively instantaneously”…

‘It´s something that would happen relatively instantaneously,’ Kirby said.

‘Probably today if it happened, you would see seawater rushing in.’

Right now, most people living in California are not thinking about earthquakes because they are dealing with the worst wildfire season in the history of the state.

Millions of acres have already burned, and the skies have been filled with smoke for weeks on end.

For many residents, this has been the final straw and they are finally moving out of the state.

But of course most Californians will just continue to stay where they are no matter what happens, and one day “the Big One” will turn all of their lives upside down in a single moment.