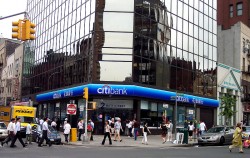 When I was growing up, I remember how banks would bend over backwards to get your business.  The customer service was generally very good and banks were not gouging us with ridiculous fees.

But now thousands of smaller banks have been gobbled up by the banking giants and things have dramatically changed.  The big banks don’t value us anymore.  They seem to believe that they have a “captive audience” and that they can treat us however they want to.

Well, it is time for us to draw a line in the sand.

We didn’t mind so much that they were paying us next to nothing on our savings accounts.

We didn’t say too much when ATM fees soared into the stratosphere.  For example, the average cost of using an “out of network” ATM in America today is approximately $3.81.

We didn’t even object too much when they started charging us fees for things such as getting paper statements, receiving wire transfers, or closing our accounts.

But now they have really crossed the line.

On October 1st, new federal regulations went into effect that capped what banks can charge merchants for debit card transactions.

The average fee on a debit card transaction used to be about 44 cents.

The new federal regulations cap the fee on merchants at 21 cents.

So will banks be unable to make money under these new regulations?

Well, according to U.S. Senator Dick Durbin, each debit card transaction costs the banks somewhere between 4 and 12 cents.

So a cap of 21 cents is not going to kill the banks.

However, it is going to hurt the profits that they have been making.  The new rules are expected to reduce total bank revenue by a whopping $6.6 billion a year.

So what are the big banks doing about it?

Well, they have decided to recoup that revenue by sticking it to us.

For example, Bank of America recently announced that it is about to start charging a $5 per month debit card fee.

This has sparked a firestorm of criticism.

Even members of Congress are getting involved.

According to ABC News, U.S. Senator Dick Durbin stood on the floor of the U.S. Senate this week holding up a plastic debit card and launched into a tirade about Bank of America….

“Bank of America customers, vote with your feet, get the heck out of that bank,” Durbin said on the Senate floor. “Find yourself a bank or credit union that won’t gouge you for $5 a month and still will give you a debit card that you can use every single day. What Bank of America has done is an outrage.”

But that is not the only outrageous fee that you will be hit with at Bank of America.

If you want to get a basic checking account at Bank of America you will be slapped with a $12 monthly fee unless you maintain an average balance of at least $1,500.

Other large banks are instituting debit card fees as well.

Starting in November, SunTrust will be hitting account holders with a $5 per month debit card fee.

Wells Fargo has also been testing a $3 per month debit card fee in certain markets.

But it is not just new debit card fees that are getting people upset.

For example, according to CNN large numbers of Citibank account holders will soon be paying a 15 or 20 dollar monthly fee if they do not maintain very high balances in their accounts….

At the same time, customers who have the bank’s EZ Checking account will start being charged $15 a month if they don’t carry a minimum balance of $6,000.

They know that the vast majority of American families cannot afford to keep $6,000 sitting around.

It almost seems like the big banks are trying to eliminate as many small accounts as they can.

In the old days, virtually anyone could get a free checking account, but now all that has changed.

Sadly, the era of the free checking account seems to be ending.  According to a recent survey by bankrate.com, only 45 percent of all checking accounts in the United States that don’t pay interest are still free.  Two years ago that figure was sitting at 76 percent.

The truth is that we are the ones that deserve some compensation for all of the lousy service that we have been receiving.  For example, the Bank of America online banking system has been down for five days in a row.

The average American family is barely scraping by right now and cannot afford all of these outrageous fees.  Right now, economic conditions are rapidly deteriorating and millions more Americans are falling into poverty every year.  It is absolutely disgusting that these big banks are trying to drain hundreds of extra dollars a year out of each of us.

Well, perhaps we need to start voting with our feet.  We need to tell the banksters that we don’t want their stinking bank fees and that we are switching banks.

There are lots of credit unions and small community banks that would be more than happy to have us as customers.  Yes, banking with them might not be quite as “convenient”, but the big banks have pushed us way too far this time.

These new bank fees are beyond outrageous.

We cannot allow them to do this to us.

So do you have a story about how your current bank is abusing you?  Are you completely frustrated with the big banks? Please feel free to share your thoughts below….