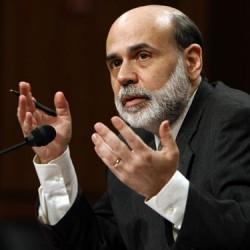 Monetizing the debt is a desperate act.  It is a signal that we are rapidly reaching the end of the game.  Slamming interest rates all the way to the floor did not revive the U.S. economy.  Hundreds of billions of dollars in extra government spending did not do the trick either.  The U.S. economy is still dying and the U.S. government is now beginning to find it very difficult to locate buyers for all the debt that it is constantly issuing.

So the Fed apparently hopes that this new round of quantitative easing will be a way to finance the exploding U.S. government debt and spark an “economic recovery” at the same time.

But didn’t Bernanke promise that the Fed was not going to do this?

Didn’t he pledge to Congress that the Federal Reserve would not monetize the debt?

Yes, he did.  The following is video footage of Bernanke from June 3rd, 2009 promising that the Federal Reserve would not monetize the debt….

So much for keeping his promises.

But what else can Bernanke do?

The truth is that we are reaching the end of the economic rope and the Federal Reserve has already played all of the other tricks that they have in their bag.

Buying up massive amounts of U.S. government debt and showering the U.S. economy with money is a desperate attempt to keep the shell game going for a few more rounds.

Once upon a time, the U.S. dollar was the strongest currency on the planet.  The rest of the world loved to use it as a reserve currency and they were more than glad to buy up U.S. Treasuries.

But now the mood has changed dramatically.  The rest of the world does not intend to keep lending us well over a trillion dollars each and every year.  The market for dollar-denominated debt is not what it once was.

In fact, Peter Schiff, the CEO of Euro Pacific Capital, believes that the primary reason for this new round of quantitative easing is that the U.S. government is having an increasingly difficult time financing its debts….

But the markets are not populated by a bunch of idiots.  They are going to see what is going on.  The Federal Reserve is monetizing the debt.  This is going to make U.S. government debt even less attractive to foreign investors as I wrote about yesterday….

If there comes a point when China and Japan realize that the game is up, they are going to start bailing out of U.S. Treasuries faster than you can say “panic”.  That could create a crisis of unprecedented proportions.  Of course the Federal Reserve could just keep whipping up increasingly large batches of dollars out of thin air to soak up all the excess debt flooding the market, but that kind of a Ponzi scheme would not work for long, and it would likely set off horrific inflation.

In order for the current world financial system to maintain stability, there must be faith in the U.S. dollar and in U.S. Treasuries.  Once faith in those two pillars is gone, it is inevitable that the whole system will come crashing down.

We like to think that we live in such a “democratic” society, but the decisions on which our economic future rest are in the hands of a group of unelected, unaccountable central bankers.

In fact, most Americans do not even know that the Federal Reserve, in association with their buddies on Wall Street, caused the first Great Depression.

But Ben Bernanke does.

At a November 8th, 2002 conference to honor Milton Friedman’s 90th birthday, Bernanke actually confessed that Milton Friedman and Anna J. Schwartz were right when they wrote that the Federal Reserve caused the Great Depression….

Let me end my talk by abusing slightly my status as an official representative of the Federal Reserve. I would like to say to Milton and Anna: Regarding the Great Depression. You’re right, we did it. We’re very sorry. But thanks to you, we won’t do it again.

So does that make you feel better?

Ben Bernanke says that the folks over at the Federal Reserve are very sorry that they caused the Great Depression of the 1930s and they promise not to do it again.

Of course we have already seen how much Ben Bernanke’s promises are worth.

With people like Bernanke in charge, there is not a lot of reason for optimism.

Meanwhile, Bernanke and his fellow central bankers are heading down to Jekyll Island this weekend for a grand celebration.

They will surely be congratulating themselves on doing such a fine job of running the U.S. economy.

Yeah, they are doing a fine job of running it – right off a cliff and into oblivion.