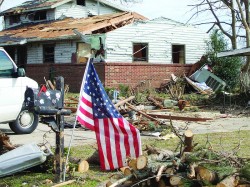 There has been a natural disaster that has caused at least a billion dollars of damage inside the United States every single month so far this year.  According to the National Oceanic and Atmospheric Administration, there have been 10 major disasters in the United States this year.  On average, usually there are only about 3 major disasters a year.  At this point, disasters are happening inside the United States so frequently that there seems to be no gap between them.  We just seem to go from one major disaster to the next.  Last year, FEMA declared an all-time record of 81 disasters inside the United States.  This year, we are on pace for well over 100.  We just got done dealing with Hurricane Irene, and now we are dealing with historic wildfires in Texas and unprecedented flooding up in the northeast part of the country.  This has been the worst year for natural disasters in U.S. history, and we still have nearly four months left to go.  Hopefully after everything that has happened this year it has become abundantly clear to all of us why we need to prepare for emergencies.  The world is becoming an increasingly unstable place, and you never know what is going to happen next.

Thankfully, the U.S. has not experienced a disaster on the level of Hurricane Katrina so far this year, but what makes this year different is that we have never seen so many major disasters happen so rapidly.  Since the beginning of the year we have had to deal with record-setting winter storms, nightmarish tornadoes, “once in a century” earthquakes, historic flooding all over the country, severe drought and some of the worst wildfires the U.S. has ever experienced.

Is there a reason why the United States is being hit by major disaster after major disaster or is all of this just a really unfortunately coincidence?  The following are just a few of the nightmarish natural disasters that the U.S. has had to deal with so far this year…..

At this point, the state of Texas has been on fire for nearly 300  consecutive days.  This has been the worst wildfire season that Texas has ever experienced.

So far, an astounding 3.6 million acres has been burned.  Vast stretches of Texas have been transformed into desolate wastelands.

Over the past week alone, the Texas Forest Service has responded to more than 180 new fires.  The incredibly dry weather and the scorching temperatures have combined to turn the state of Texas into a tinderbox.

One massive wildfire near Austin, Texas has burned approximately 1,400 homes and continues to spread.  The state desperately needs rain and it needs it now.

To get an idea of just how fast the fires in Texas are spreading, just watch this video.

Right now, approximately 81 percent of the state of Texas is experiencing “exceptional drought” conditions.  Not only has this created an ideal environment for wildfires, it is also absolutely crippling ranchers and farmers.

Farmers in Texas have lost over half of the cotton crop so far.  This is likely to cause clothing prices to rise substantially in the months ahead.

Ranchers in Texas have been forced to slaughter huge numbers of cattle because the drought has made it incredibly difficult to feed them.  Sadly, the number of U.S. cattle is now down to its lowest level since 1963.

You might want to stock up on beef.  In the coming months the price of beef is likely to go significantly higher.

It is hard to describe just how bad things are down in Texas right now.  Overall, it is estimated that the drought has caused  more than $5 billion in damage to the agricultural industry so far.

But wait, there is more bad news.  In fact, if things don’t improve soon we could see massive problems with winter wheat.  Just check out what an article recently posted on Yahoo news had to say….

The bad news does not stop there. Winter-wheat-planting season runs from September through October and rain is vital to germination. Texas and Oklahoma produce almost a third of winter wheat in the U.S. – the hard wheat used in bread products. This week, Bloomberg financial news quoted wheat economists predicting a 50% jump in winter-wheat prices. If the dearth of rain continues and there is no moisture in the soil to germinate the wheat, prices could climb higher still.

Flooding In The Northeast

We just got done with Hurricane Irene, and now Tropical Storm Lee is dumping huge amounts of rain all over the northeast United States.  In fact, there has been so much rain up in Pennsylvania that more than 100,000 people were evacuated from the Wilkes-Barre area on Thursday because of rising waters on the Susquehanna River.

Rivers and creeks all over Pennsylvania, New York and New Jersey are flooding.  The region desperately needs a break from rain, but it does not look like that is going to happen quite yet.

Now there are three more storms in the Atlantic that we will have to keep an eye on.  Hopefully Tropical Storm Nate, Tropical Storm Maria and Hurricane Katia will not cause major problems, but with the way this year has been going you never know what is going to happen.

As I have written about previously, the number of major earthquakes around the globe is significantly increasing.  Back in 2001, the world had 1361 earthquakes of magnitude-5.0 or greater.  This year, we are on pace to have over 2800, which would be the highest number this decade by far.

Just a couple of weeks ago, the U.S. experienced two of the weirdest earthquakes that it has seen in ages.  The earthquake in Virginia that made headlines all over the nation is being called a “once a century” earthquake.  The east coast very rarely sees anything like this happen.

In Washington D.C., the earthquake caused quite a bit of panic.  Congressional buildings were evacuated and so was the Pentagon.  The earthquake actually cracked the Washington Monument and it also caused significant damage to the U.S. Treasury building.

That exact same day, there was another very “unusual” earthquake in another area of the United States.  A magnitude-5.3 earthquake shook the area along the Colorado/New Mexico border.  That was the largest earthquake that region had experienced in more than 40 years.

Sadly, it is not just the U.S. that has been hit by significant earthquakes this year.  Just check out what a recent article in the Guardian had to say about what has been going on around the globe so far this year….

With all of the other natural disasters that we have had recently, it is easy to forget that we just went through one of the worst tornado seasons of all time.

In a recent article, I discussed the incredible damage that some of these monstrous tornadoes did….

The United States experienced a truly bizarre tornado season this year.  In April, there were approximately 600 tornadoes all across America.  That is the most tornadoes that have ever been recorded in a single month inside the United States.  Usually, we only have about 1,200 tornadoes for the entire year.

The massive tornado outbreak in the southeast at the end of April is being called the worst natural disaster since Hurricane Katrina.  One F5 tornado that ripped through the Tuscaloosa, Alabama region was reportedly a mile wide and some scientists estimated that it had winds that exceeded 260 miles an hour. By the time it passed, Tuscaloosa resembled a war zone.

The tornado that ripped through Joplin, Missouri a few months ago is being called the deadliest single tornado in more than 60 years.  It ripped a path of destruction more than a mile wide and more than 6 miles long directly through the city.  One British newspaper has some amazing before and after pictures of Joplin that you can view right here.

After viewing pictures such as those, what else is there to say?

Sadly, there were a lot of other major disasters this year that deserve be discussed as well.

For example, I have not even mentioned the nightmarish flooding along the Mississippi and Missouri rivers.  River systems all over the central part of the country experienced “hundred year floods” this year.

So why is all of this happening?  Is there a reason for all of this chaos, or has it just been one of those years?

Whatever your opinion is, what we all should be able to learn from this year is that it is imperative that we all get prepared ahead of time for emergencies.

Natural disasters can strike at any time.  Whether it is a hurricane, a tornado, a flood, an earthquake, a volcano or a wildfire, if you wait until the disaster strikes to prepare then you are going to be too late.

But most natural disasters are only temporary.  Even more frightening is what an economic collapse, a war, a deadly plague, a nuclear disaster, an EMP strike or a weapon of mass destruction could mean.

As we have seen during so many disasters in the past, when something really bad happens food and supplies vanish from store shelves almost immediately.  If transportation is cut off, you could be on your own for an extended period of time.

Our world is becoming a highly unstable place.  If someone had told you all of the crazy things that were going to happen this year, would you have believed them?

It seems like with each passing year things are getting crazier and crazier.  Yes, we can all hope that things will return to “normal”, but we would be foolish if we also did not take precautions.

As I have written about before, the global economy is starting to collapse, the fabric of society is coming apart and the earth itself seems to be going crazy.

We certainly do live in interesting times.  The years ahead promise to be some of the most exciting in human history.  But those that are unprepared could end up going through a massive amount of pain.

So please prepare while there is still time.  You will not always be able to run out to Wal-Mart and buy up all of the cheap stuff that you need.

Anyone with half a brain can see the dark storm clouds gathering on the horizon.  Very, very difficult times are coming, and you do not want to enter them unprepared.