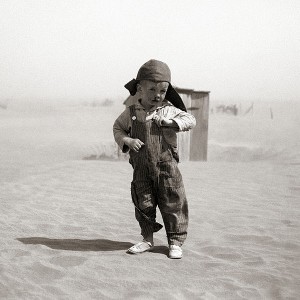 In early 1978, a song entitled “Dust in the Wind” by a rock band known as Kansas shot up the Billboard charts.  When Kerry Livgren penned those now famous lyrics, he probably never imagined that Dust Bowl conditions would return to his home state just a few short decades later.  Sadly, that is precisely what is happening.  When American explorers first traveled through north Texas, Oklahoma and Kansas, they referred to it as “the Great American Desert” and they doubted that anyone would ever be able to farm it.  But as history has shown, when that area gets plenty of precipitation the farming is actually quite good.  Unfortunately, the region is now in the midst of a devastating multi-year drought which never seems to end.  Right now, 56 percent of Texas, 64 percent of Oklahoma and 80 percent of Kansas are experiencing “severe drought”, and the long range forecast for this upcoming summer is not good.  In fact, some areas in the region are already drier than they were during the worst times of the 1930s.  And the relentless high winds that are plaguing that area of the country are kicking up some hellacious dust storms.  For example, some parts of Kansas experienced a two day dust storm last month.  And Lubbock, Texas was hit be a three day dust storm last month.  We are witnessing things that we have not seen since the depths of the Dust Bowl days, and unless the region starts getting a serious amount of rain, things are going to get a whole lot worse before they get any better.

Over the past two months, very high winds and bone dry conditions have made the lives of ordinary farmers in the state of Kansas extraordinarily difficult.  Just check out the following excerpt from a recent article posted on Agriculture.com…

The dust has settled, but for how long no one can be sure. At any moment, the winds may blow, moving the topsoil — soil that took Mother Nature generations to craft — even farther from its origin.

One farmer reckons that precious topsoil, native to his farm in Kearny County, Kansas, now sits in a field at least 200 miles away, blown there by the relentless winds of March and April 2014.

Affecting counties in western Texas, Oklahoma, and Kansas, and eastern Colorado, it was reminiscent of what folks in the same region faced 80 years ago.

“There were several days we couldn’t see 100 yards in front of us,” says Tom Hauser, a farmer near Ulysses, Kansas. “We didn’t know where the dust was coming from. It was moving in here from somewhere else, just like it did back in the 1930s.“

When heavy winds blow day after day but there is no rain, it creates ideal conditions for dust storms.  According to the same article that I just mentioned, the average wind speed in the little community of Syracuse, Kansas has been over 50 miles an hour so far this year…

Since the beginning of 2014, the average maximum daily wind speed in Syracuse, Kansas, is 50.6 miles per hour, according to the Kansas State University Weather Data Library. In that same time, Syracuse has received just 1 inch of total precipitation.

That is a recipe for disaster.

“I’ve had to chisel more ground this year than the last 20 years put together,” says Gary Millershaski, who farms near Lakin in Kearny County. Chiseling the ground roughs it up, and helps prevent soil from blowing – at least for a little while.

I couldn’t imagine living somewhere with such high winds day after day.

But this is what farmers in the High Plains have to deal with on a constant basis.

And needless to say, when things are this dry those kinds of winds can kick up some immense dust storms.  In fact, a dust storm in late April was so large that it covered most of the region…

Monday’s dust storm was so large it covered most of Kansas, western Oklahoma, the Texas Panhandle and eastern Colorado, said weather service meteorologist Jeff Hutton in Dodge City. Tuesday’s dust cloud was more localized, only found in some parts of Kansas.

“That is what happens when you get drought, a lack of vegetation and you have wind,” Hutton said. “I mean, that is just the nature of the High Plains. And then that dirt that was lofted is eventually carried into eastern Kansas.”

When one of these dust storms strikes, you want to get indoors and stay there.  It isn’t even safe to be driving.  When you can’t even see five feet in front of you, the odds of getting into a fatal accident rise exponentially.  Just check out what happened earlier this year near the little town of Liberal, Kansas…

At least 12 vehicles were involved in an pileup accident near Liberal, Kansas.

The accident happened around 1:40 p.m., nine miles southwest of Liberal. It appears that blowing dust limited visibility so severely that it cause vehicles to not see each other until it was too late and they collided. One report states that visibility was less than five feet.

According to Chief Anthony Adams of the Tyrone Fire Department in Oklahoma, six of the vehicles involved were cars and trucks, the other six were tractor trailers.

As bad as things are in Kansas right now, the truth is that things are probably even worse down in Texas.  Amarillo has had 10 dust storms so far this year, and Lubbock has already had 15 days of dust storms in 2014…

The number of dust storms seems to rise with the length of the drought. Amarillo has had 10 this year; it had none in 2010. The city is about 10 percent drier now than the 42 months that ended April 30, 1936, and drier than the state’s record drought in the 1950s.

And remember, we haven’t even gotten to the summer months yet.

As conditions get even worse in the heartland of America, it is going to end up deeply affecting all of us.  The farmers and ranchers that live there provide a tremendous amount of food for the rest of the country, and food prices are already starting to rise at an alarming pace.

So what is going to happen if this drought extends for several more years or even longer?

Some experts such as paleoclimatologist Edward Cook have suggested that we could be in the midst of a “megadrought” that could last for decades or even centuries.

Many of those that were convinced that we could never see a return of the Dust Bowl days are now being forced to reevaluate their beliefs.  According to the National Weather Service, parts of Kansas, Colorado, Texas and Oklahoma are already drier than they were in the 1930s.  The following is an excerpt from a recent National Geographic article entitled “Parched: A New Dust Bowl Forms in the Heartland“…

Four years into a mean, hot drought that shows no sign of relenting, a new Dust Bowl is indeed engulfing the same region that was the geographic heart of the original. The undulating frontier where Kansas, Colorado, and the panhandles of Texas and Oklahoma converge is as dry as toast. The National Weather Service, measuring rain over 42 months, reports that parts of all five states have had less rain than what fell during a similar period in the 1930s.

It is hard to put into words how incredibly serious this all is.

A few years ago, when I wrote articles with titles such as “20 Signs That Dust Bowl Conditions Will Soon Return To The Heartland Of America“, a lot of people laughed.

Not that many people are laughing now.

The truth is that we are now in the midst of the worst drought crisis since the days of the Great Depression.

Fortunately, over the past week or so there has been some rain in some of the hardest hit areas.  Let us hope that this is a sign of better things to come.

Because if this drought does not come to an end, it is going to become much, much more expensive for Americans to feed their families.

And considering the fact that 49 million Americans are already facing food insecurity, that is a threat that should not be taken lightly.