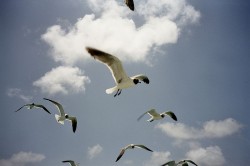 Just what in the world is going on out there? Large groups of animals are keeling over dead, thousands of birds are falling out of the sky dead and millions of dead fish are washing ashore all over the globe.  Something is happening.  Do any of you know what is causing all this, because I sure don’t.  This all seemed to start around the end of December when mass bird deaths and mass fish deaths began to be reported all around the world.  Normally “weird” news stories like this kind of fade away after a time, but reports of bird deaths and fish deaths continue to come in and now there are even reports of large groups of land animals suddenly dropping dead.  As these reports from all over the globe continue to pile up, it doesn’t take a “conspiracy theorist” to figure out that something very much out of the ordinary is going on.  Unfortunately, at this point we have a whole lot more questions than we do answers.

A couple good summaries of the mass bird and fish deaths that we witnessed during the first few weeks of this crisis can be found here and here.  Unfortunately, large groups of animals, birds and fish continue to keep dying.  The following is just a handful of the reports that have poured in from all over the globe during the past week or so….

-“Hundreds of dead seals in Labrador”

-“Another Massive Bird Kill in the Tennessee Valley”

-“Trapped in ice, ‘thousands’ of fish die in Detroit River”

-“Dead birds from north Ala. being sent to Auburn for testing”

It was easy enough to brush off one or two “mass death” news stories, but when they start coming in day after day after day it really starts to get your attention.

So does anyone know why all of this is happening all of a sudden?

Well, there certainly are a lot of theories being floated around out there.  When things like this start happening people start coming up with all sorts of really wild ideas.  Posted below is a list of some of the most common theories about these mass death.  Some of the theories seem to have some substance to them, while others seem just downright bizarre.

Theories That Have Been Put Forward To Explain The Huge Numbers Of Dead Animals, Dead Birds And Dead Fish Around The Globe

*Changes In The Magnetic Field Of The Earth

*Effects Of The BP Oil Spill

*The Second Coming Of Jesus

*Birds Are Dying Because Of Indigestion

*Increased Radiation From The Sun

*Large Groups Of Animals Always Die And This Is All Normal

Now, it must be noted that a couple of the recent “mass death episodes” can actually be explained.  For example, the U.S. government has admitted being responsible for the deaths of several hundred birds in South Dakota.

But what about the dozens of other “mass death” reports that have been pouring in from all around the earth?  How do we explain all of those?

Hopefully all this will end up being nothing.

Hopefully it will turn out that all of this can be easily explained.

As I wrote about the other day, the entire world financial system is on the verge of collapse.  At this point any kind of major event could be the “tipping point” that pushes the global economy into chaos.

The world as we know it can literally change overnight.  Today a reader emailed me the following video.  It is entitled “The Day After The Dollar Crashes”, and it takes the viewer through what a potential unraveling of the global financial system might look like.  As you watch this, keep in mind that any type of “big event” could set off a panic like this….