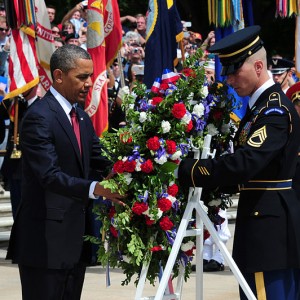 This Memorial Day, Barack Obama and members of Congress will honor our veterans by wearing ribbons and laying wreaths, but what they should really do is apologize to the entire nation for treating them like human trash for the past five years.  You see, the truth is that this VA scandal is nothing new.  The problems at the VA hospitals have been documented over and over again for years.  When Barack Obama was a U.S. senator, he served on the Veterans Affairs Committee.  So as he entered the White House, he was supposed to be an expert in this area.  And back in 2008, he pledged to “make the VA a leader of national health care reform so that veterans get the best care possible“.  But of course that never happened.  And now Obama is claiming that he only learned of the “secret waiting lists” at VA hospitals by “watching television“, and his staff says that he is “madder than hell” about it.  So now that he has been publicly shamed, will Obama actually do something about it?  Because our military veterans deserve far better care than what they have been getting.

Most Americans don’t realize this, but members of al-Qaeda detained at Guantanamo Bay actually receive far better medical treatment than our military veterans do.  Just consider what former Pentagon spokesperson J.D. Gordon had to say about the matter…

Doctors and medical personnel are at their beck and call.  Got a cold, a fever, a toothache, a tumor, chest or back pain, mental health issues, PTSD?  No problem, come right on in. Military doctors are waiting to see you.

Because there are not nearly enough doctors for our veterans, many of them end up waiting for months just to get an appointment with one.  It was CNN that blew the lid off this story when they reported that at least 40 military vets had died while waiting for appointments in the Phoenix area…

At least 40 U.S. veterans died waiting for appointments at the Phoenix Veterans Affairs Health Care system, many of whom were placed on a secret waiting list.

The secret list was part of an elaborate scheme designed by Veterans Affairs managers in Phoenix who were trying to hide that 1,400 to 1,600 sick veterans were forced to wait months to see a doctor, according to a recently retired top VA doctor and several high-level sources.

For six months, CNN has been reporting on extended delays in health care appointments suffered by veterans across the country and who died while waiting for appointments and care. But the new revelations about the Phoenix VA are perhaps the most disturbing and striking to come to light thus far.

CNN was reporting on this for months, but Obama only learned about this just recently?

Considering that he is the chief executive of the entire system, how in the world is that possible?

And of course this has not just been happening in Phoenix.  The following is an excerpt from a news story about a vet that died in Houston while waiting for the VA system to take care of him…

George Barraza love two things in this life: playing the electric guitar with all his heart and this country.

During the Vietnam War, Barraza proudly served in the U.S. Army.

But on April 16, Barraza, a father of three girls, a chef and an American veteran, died waiting for an appointment at the VA Medical Center in Houston.

At the time of his death, Barraza was battling heart disease, high blood pressure, diabetes, cirrhosis of the liver and liver cancer. But his problems became much worse in September when he went to the Michael Debakey VA Medical Center in terrible pain and unable to move his hands at all.

“They said, ‘Oh, that looks like it hurts, let me give you some pain medication and send you on home,'” said Barraza’s daughter, Georgia Barraza who complains the VA staff did not treat her father’s problem that day by admitting him and caring for him, but instead gave him pain medication and an appointment to come back.

You can read the rest of this incredibly sad story right here.

And here is an example from Seattle…

Donald Douglass had a small spot on his forehead when he went to the Seattle Veterans Affairs hospital in 2011.

A biopsy confirmed it was cancerous. But it was four months before the hospital scheduled an appointment for him to have it removed — and by then, it had spread, wrapping around a facial nerve and eventually getting into his blood.

The delay proved fatal, his lawyer said — and it mirrors concerns being raised about the VA system nationally.

In fact, veteran deaths like this have been documented all over the nation.  After sacrificing so much, our vets are being horribly neglected.

It is a national disgrace.

And of course the problems go far beyond waiting times.  For example, down in Miami illegal drug dealing is rampant at VA facilities…

When asked why he would risk his job and speak publicly, Detective Thomas Fiore considered the question carefully before answering.

“People are dying,” he finally said, “and there are so many things that are going on there that people need to know about.”

Fiore, a criminal investigator for the VA police department in South Florida, contacted CBS4 News hoping to shed light on what he considers a culture of cover-ups and bureaucratic neglect. Among his charges: Drug dealing on the hospital grounds is a daily occurrence.

“Anything from your standard prescription drugs like OxyContin, Vicodin, Percocet, and of course marijuana, cocaine, heroin, I’ve come across them all,” he explained.

The whistleblower, who wishes to remain anonymous for obvious reasons, works at a large 250 acre VA hospital in North Carolina. He presented his credentials to us which checked out. The VA employee lifted the lid on a number of shocking details during an interview with Sgt. Joe Biggs.

“Recently there’s been a very rapid race to move records, boxes, change labels, whatever it may be, they’re putting them in rooms that nobody would look in….and there’s multiple times that I have seen in the past week or so them moving boxes….so apparently they’re hiding their tracks somewhere,” stated the VA employee, adding that the activity preceded an inspection of the facility, suggesting it was part of an effort to conceal evidence in the aftermath of the secret waiting list scandal.

Even more chilling was a warning sent out to VA employees at the facility which, according to the whistleblower, was meant to get across the message, “Do you see what happens to the people that try to get things straight around here, they’re not here anymore,” a tone the whistleblower described as “pretty telling.”

The employee also revealed the shocking attitude of one supervisor at the hospital towards older veterans, who asserted that older vets “should be taken outside and shot in the head because they’re worthless.” The individual still works at the hospital and was not disciplined for his comments.

What is happening to this nation?

How can we treat our military veterans like this?

The bodies of 28 veterans at the L.A. County Morgue were finally moved Friday for burial to the Riverside National Cemetery.

CBS2/KCAL9 pressed the L.A. County Coroner’s Office Thursday to find out why the bodies had not yet received a proper burial after a source indicated there may have been as many as 60 veterans at the morgue for the past year and a half.

The morgue says the bodies were unclaimed and they don’t know how long the veterans were there.

The law states veterans are supposed to receive a proper burial.

Barack Obama is acting like all of this is a huge surprise to him.

Even though he worked on these issues as a U.S. Senator, and even though he has been the top executive in charge of the system for five years, he claims complete ignorance about what has been going on.

I find this very hard to believe.

The truth is that the news media has been reporting about these kinds of abuses for ages.

And personally, I have been writing about these things for years.  Here are some examples…

2013: “There Already Is A Government Health Care System In America And It Is The Medical Version Of Hell”

2013: “25 Signs That Military Veterans Are Being Treated Like Absolute Trash Under The Obama Administration”

2012: “Why Does The U.S. Government Treat Military Veterans Like Human Garbage?”

So how is it possible that so many people could have been talking about these things for so many years and yet Obama knew nothing?

The truth is that Obama does not want to take any responsibility for this scandal or any other scandal.

He wants to continue to be a teflon politician that nothing ever sticks to.

But now he has absolutely no excuse for not taking action.

Hopefully Obama will step up to the plate and do the right thing.