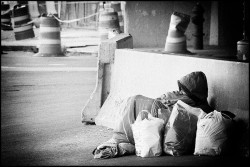 America is getting poorer.  The U.S. government has just released a bunch of new statistics about poverty in America, and once again this year the news is not good.  According to a special report from the U.S. Census Bureau, 46.2 million Americans are now living in poverty.  The number of those living in poverty in America has grown by 2.6 million in just the last 12 months, and that is the largest increase that we have ever seen since the U.S. government began calculating poverty figures back in 1959.  Not only that, median household income has also fallen once again.  In case you are keeping track, that makes three years in a row.  According to the U.S. Census Bureau, median household income in the United States dropped 2.3% in 2010 after accounting for inflation.  Overall, median household income in the United States has declined by a total of 6.8% once you account for inflation since December 2007.  So should we be excited that our incomes are going down and that a record number of Americans slipped into poverty last year?  Should we be thrilled that the economic pie is shrinking and that our debt levels are exploding?  All of those that claimed that the U.S. economy was recovering and that everything was going to be just fine have some explaining to do.

However, it is important to keep in mind that the government definition of poverty rises based on the rate of inflation.  If inflation was still calculated the way that it was 30 or 40 years ago, the poverty line would be much, much higher and millions more Americans would be considered to be living in poverty.

So why is poverty in America exploding?  Who is getting hurt the most?  How is America being changed by this?  What is the future going to look like if we remain on the current path?

Let’s take a closer look at poverty in America….

The Shrinking Number Of Jobs

Unemployment is rampant and the number of good jobs continues to shrink.  Once upon a time in America, if you really wanted a job you could go out and get one.  Today, competition for even the lowest paying jobs has become absolutely brutal.  There simply are not enough chairs at the “economic table”, and not being able to get a good job is pushing large numbers of Americans into poverty…..

*There are fewer payroll jobs in the United States today than there were back in 2000 even though we have added 30 million people to the population since then.

*If you gathered together all of the unemployed people in the United States, they would constitute the 68th largest country in the world.

*If you have been unemployed for at least one year, there is a 91 percent chance that you will not find a new job within the next month.

*Between 1969 and 2009, the median wages earned by American men between the ages of 30 and 50 dropped by 27 percent after you account for inflation.

*Half of all American workers now earn $505 or less per week.

*Last year, 19.7% of all U.S. working adults had jobs that would not have been enough to push a family of four over the poverty line even if they had worked full-time hours for the entire year.

*The number of Americans that are going to food pantries and soup kitchens has increased by 46% since 2006.

Unprecedented Dependence On The Government

Because they cannot get good jobs that will enable them to support themselves and their families, millions of Americans that used to be hard working contributors to society are now dependent on government handouts.  Nearly every single measure of government dependence is at a record high, and there are no signs that things are going to turn around any time soon.

*One out of every six Americans is now enrolled in at least one government anti-poverty program.

*Nearly 10 million Americans now receive unemployment benefits.  That number is almost four times larger than it was back in 2007.

*Approximately one-third of the entire population of Alabama is now on food stamps.

*More than 50 million Americans are now on Medicaid.

The Suffocating Cost Of Health Care

Millions of American families are being financially crippled by health care costs.  The U.S. health care system is deeply, deeply broken and Obamacare is going to make things even worse.  Health care is one of the top reasons why American families get pushed into poverty.  Most of us are just one major illness or disease from becoming financially wrecked.  Just ask anyone that has gone through it.  The health insurance companies do not care about you and they will try to wiggle out of their obligations at the time when you need them the most.  If you talk to people that have been through bankruptcy, most of them will tell you that medical bills were at least partially responsible.

*In America today, there are 49.9 million Americans that do not have any health insurance.  One single medical bill could easily wipe out the finances of most of those people.

*Only 56 percent of Americans are currently covered by employer-provided health insurance.

*According to a report published in The American Journal of Medicine, medical bills are a major factor in more than 60 percent of the personal bankruptcies in the United States.  Of those bankruptcies that were caused by medical bills, approximately 75 percent of them involved individuals that actually did have health insurance.

*According to the Bureau of Economic Analysis, health care costs accounted for just 9.5% of all personal consumption back in 1980.  Today they account for approximately 16.3%.

*The poverty rate for children living in the United States increased to 22% in 2010.  That means that tonight more than one out of every five U.S. children is living in poverty.

*Households that are led by a single mother have a 31.6% poverty rate.

*Today, one out of every four American children is on food stamps.

*It is being projected that approximately 50 percent of all U.S. children will be on food stamps at some point in their lives before they reach the age of 18.

*There are 314 counties in the United States where at least 30% of the children are facing food insecurity.

*It is estimated that up to half a million children may currently be homeless in the United States.

The Plight Of The Elderly

The elderly are also falling into poverty in staggering numbers.  They may not be out protesting in the streets, but that does not mean that they are not deeply, deeply suffering.

*One out of every six elderly Americans now lives below the federal poverty line.

*The Baby Boomers have only just begun to retire, and already our social programs for seniors are starting to fall apart.  In 1950, each retiree’s Social Security benefit was paid for by 16 U.S. workers.  According to new data from the U.S. Bureau of Labor Statistics, there are now only 1.75 full-time private sector workers for each person that is receiving Social Security benefits in the United States.

Rising inflation is squeezing the budgets of average American families like never before.  Federal Reserve Chairman Ben Bernanke claims that inflation is still low, but either he is delusional or he has not been to a supermarket lately.

Personally, I do a lot of grocery shopping at a number of different stores, and without a doubt prices are absolutely soaring.  Many of the new “sale prices” are exactly what the old “regular prices” were just a few weeks ago.

Some companies have tried to hide these price increases by shrinking package sizes.  But there is no hiding the pain on the old wallet once you fill up your cart with what you need to feed your family.

*Over the past year, the global price of food has risen by 37 percent and this has pushed approximately 44 million more people around the world into poverty.

*U.S. consumers will spend approximately $491 billion on gas this year.  That is going to be a brand new all-time record.

*Right now, the average price of a gallon of gasoline in the United States is $3.649.  That is 94 cents higher than 12 months earlier and it is a brand new record for this time of the year.

*According to the Washington Post, the average yearly income of the bottom 90 percent of all U.S. income earners is now just $31,244.

*When you look at the ratio of employee compensation to GDP, it is now the lowest that is has been in about 50 years.

*At this point, the poorest 50% of all Americans now control just 2.5% of all of the wealth in this country.

*Big corporations are even recognizing the change that is happening to America. Just consider the following example from a recent article in the Huffington Post….

Manufacturers like Procter & Gamble, the household-goods giant responsible for everything from Charmin and Old Spice to Tide, are concentrating their efforts on luxury and bargain items, putting less emphasis on products aimed at the middle class, the Wall Street Journal reports.

America is fundamentally changing.  We were a nation that had the largest middle class in the history of the globe, but now we are becoming a nation that is deeply divided between the haves and the have nots.

If you still have a warm, comfortable home to sleep in, you should be thankful.  Poverty is a very sneaky enemy and it can strike at any time.  If you are not careful, you might be the next American to end up sleeping in your car or living in a tent city.

It is easy to disregard a couple of statistics, but can you really ignore the vast amount of evidence presented above?

It is undeniable that America is getting poorer.  Poverty is spreading and hopelessness and despair are rising.  There is a reason why the economy is the number one political issue right now.  Millions upon millions of Americans are in deep pain and they want some solutions.

Unfortunately, it appears quite unlikely that either major political party is going to offer any real solutions any time soon.  So things are going to keep getting worse and worse and worse.

What we are doing right now is not working.  We are in the midst of a long-term economic decline.  Both major political parties have been fundamentally wrong about the economy.  It is time to admit that.

If we continue on this path, poverty in America is going to continue to get a lot worse.  Millions of families will be torn apart and millions of lives will be destroyed.