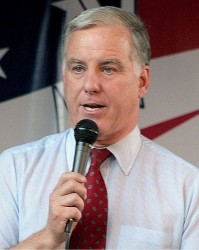 In the shocking video you are about to watch, Howard Dean declares that it is the job of the government to redistribute our wealth.  Not only that, he says it in such a way that indicates that he believes that such a notion should be obvious to anyone with half a brain.  Well, while it is true that the United States has become a highly socialized nation, the reality is that this is not what the founding fathers intended.  The founders intended for us to live in a land where we would have enough freedom and enough liberty to be able to work hard and enjoy life, liberty and the pursuit of happiness.  They did not intend for a gigantic federal government to take huge amounts of money from one group of people and give it to another group of people.  In any nation where a large scale redistribution of wealth is happening, the incentive to work goes right out the window.  Pretty soon you end up with an entire class of people that have learned how to “make a living” by being a parasite of the government, and that is not good for any economy.

If our founding fathers were alive today, they would be horrified by what we have turned into.  In 1816, Thomas Jefferson wrote the following….

“To take from one, because it is thought his own industry and that of his fathers has acquired too much, in order to spare to others, who, or whose fathers, have not exercised equal industry and skill, is to violate arbitrarily the first principle of association, the guarantee to everyone the free exercise of his industry and the fruits acquired by it.”

The sad truth is that democracy starts to break down once people start realizing that they can vote themselves money out of the national treasury.  In fact, that is a very large part of what politics in America is all about today.  Politicians are constantly promising what they are “going to do” for various groups of people.

Benjamin Franklin once stated the following….

“When the people find that they can vote themselves money, that will herald the end of the republic.”

With all of that in mind, watch this shocking video of Howard Dean declaring that it is the job of the government to redistribute our wealth….

Obviously Howard Dean envisions an “America” that is very different from the one that our founding fathers intended.

But does that mean that all government welfare programs are bad?

In fact, if we were to cut them all off today we would have millions of people starving in the streets.

A very large percentage of Americans today don’t even know how to take care of themselves.  If we pulled away all government support all of a sudden there would be chaos and anarchy in the streets.

The sad reality is that we have tens of millions of Americans that are now deeply dependent on the socialist system that we have established.

So does that mean that our founding fathers would be in favor of the rampant corporate greed that we are witnessing today?

As I have written about previously, the founding fathers were against all large concentrations of power.  During the Boston Tea Party, it was the tea of perhaps the most powerful corporation in the entire world at the time (the East India Trading Company) that our founders dumped into the harbor.

If you study early American history, you soon come to realize that corporations were generally very limited in scope and size for many, many years.  The era of the giant corporation is relatively new, and our founding fathers never intended for our society to be dominated by gigantic international corporations.

Fortunately, many Americans today are getting back in touch with those principles.  There is a growing dissatisfaction with the size of government, and according to Gallup two-thirds of Americans are now dissatisfied with the size and influence of major corporations in America today.

However, it is one thing to discuss the finer points of political and economic philosophy, but it is another thing altogether to deal with the reality of tens of millions of people that cannot feed themselves.

As I have mentioned many times before, there are over 43 million Americans on food stamps today.

So what are we going to do with all of them?

Allow them to starve?

What are we going to do – cut off Social Security and watch millions of elderly and disabled people freeze to death in their own homes?

But we have got to start swinging the pendulum back in the other direction.  Right now one out of every six Americans is enrolled in some kind of anti-poverty program run by the federal government.

How many Americans being taken care of by the federal government will be too much?

One out of five?

One out of four?

One out of three?

Eventually the entire system crumbles when there are too few people still willing to work hard.

If you ever get the chance to visit a communist country you should.  You will notice that nobody really works very hard.  That is because there is no incentive to work hard.  Very little real wealth gets produced and everyone suffers for it.

So does that mean the U.S. system works?

What we have in the United States today is not real capitalism.  It is more aptly called “corporatism”.  The big corporations and the big financial institutions have accumulated an absolutely stunning amount of economic power and over the decades they have gotten the government to tilt all of the rules of the game in their favor.

In America today, it is really hard for the average person to start a successful business.  The big, powerful international corporations that dominate our economy are everywhere.

So most Americans today have to rely on working for an employer.  Unfortunately, the big employers have started to realize that they can make much larger profits by shipping our jobs overseas.  That is really bad news for the U.S. middle class.

Well, can’t we just tax all of these big corporations like crazy and even everything out?

Unfortunately it just does not work that way in today’s global society.

As I have written about previously, the ultra-wealthy and many of the biggest corporations have figured out how to “minimize” their tax burdens.  While you and I are being taxed into oblivion, the global elite have figured out how to move their money around to escape taxation as much as possible.  In fact, it is estimated that today approximately a third of all the wealth in the world is held in “offshore” tax havens.

Ultra-wealthy individuals and mega-powerful corporations can call just about anywhere “home” in today’s global economy.  That is just the way the world works now.

In order to “tax the rich”, you first must get legal jurisdiction over their money.

Our tax system has become entirely unfair and it simply does not work.  The whole thing needs to be scrapped.

But as we discuss tax policy, there are tens of millions of Americans that are living in poverty.

So what are we going to do about the growing number of Americans that cannot even feed themselves without government help?

Well, the truth is that what they really need is not more handouts.

If you give people handouts, they will just need more handouts tomorrow.

No, what all of these Americans really need are good jobs.

Unfortunately, there are a whole lot less good jobs in America today than there were ten years ago.

Our politicians have stood by as the giant corporations have moved thousands of facilities over to places such as China and India where they can legally pay people slave labor wages.

Since 2001, over 42,000 U.S. factories have closed down for good, and that number is going to continue to increase unless someone stops it.

Virtually all of our politicians are just standing off to the side with their hands in their pockets.

So now we have 19.3 percent of the workforce that is either unemployed or underemployed.

Our entire economic system is breaking down.  Millions of Americans families are scrambling to find some way to survive.  Over the past two years, U.S. consumers have withdrawn $311 billion more from savings and investment accounts than they have put into them.

Other Americans are going very deep into debt because they don’t have any other options.  When they finally can’t keep up with all the debt, many of these families are losing their cars and their homes.

We are in the middle of an economic nightmare that is absolutely unprecedented.  “Redistributing the wealth” would just be like rearranging the deck chairs on the Titanic at this point.  It would not fix a darn thing.

When our politicians promise that a little “change” here or a little “tweak” there will get our economy back to normal they are lying to you and most of them know it.

What we need is a comprehensive overhaul of our entire economy.  Basically what we need to do is to go back to the blueprint (the U.S. Constitution) and essentially start over.

But a massive economic collapse is coming.  This whole thing is going to come crashing down and it is not going to be pretty.