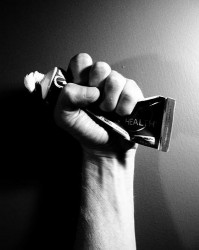 Even with all of the massive economic problems that the United States is facing, if the government would just get off our backs most of us would do okay.  In America today, it is rapidly getting to the point where it is nearly impossible to start or to operate a small business.  The federal government, the state governments and local governments are cramming thousands upon thousands of new ridiculous regulations down our throats each year.  It would take a full team of lawyers just to even try to stay informed about all of these new regulations.  Small business in the United States is literally being suffocated by red tape.  We like to think that we live in “the land of the free”, but the truth is that our lives and our businesses are actually tightly constrained by millions of rules and regulations.  Today there is a “license” for just about every business activity.  In fact, in some areas of the country today you need a “degree” and multiple “licenses” before you can even submit an application for permission to start certain businesses.  And if you want to actually hire some people for your business, the paperwork nightmare gets far worse.  It is a wonder that anyone in America is still willing to start a business from scratch and hire employees.  The truth is that the business environment in the United States is now so incredibly toxic that millions of Americans have simply given up and don’t even try to work within the system anymore.

But it is not just the federal government that is ramming thousands of ridiculous regulations down our throats.  The truth is that in many cases state and local governments are far worse.  We have become a nation that is run and dominated by bureaucrats.  Yes, there always must be rules in a society, but we have gotten to the point where there are so many millions of rules that the game has become unplayable.

The following are 12 examples of ridiculous regulations that are almost too bizarre to believe….

#1 The state of Louisiana says that monks must be fully licensed as funeral directors and actually convert their monasteries into licensed funeral homes before they will be allowed to sell their handmade wooden caskets.

#2 The city of Philadelphia now requires all bloggers to purchase a $300 business privilege license.  The city even went after one poor woman who had earned only $11 from her blog over the past two years.

#3 In the state of Massachusetts, all children in daycare centers are mandated by state law to brush their teeth after lunch.  In fact, the state even provides the fluoride toothpaste for the children.

#4 If you attempt to give a tour of our nation’s capital without a license, you could be put in prison for 90 days.

#5 A reader named Gene recently shared his regulatory horror story with us….

Started a new business this year in AZ. Paid over $10,000 in fees for permitting, $10,000 in fee for elec hookup, $10,000 in fees for gas hook up and an extra $200 fee per month just for the “privilige” of having gas. Adding up all the fees to start our business, I don’t think we would do it again. We are now just getting to the point that we are making our bills each month, and so we are not taking a paycheck, and don’t anticipate one for at least another year. Our family has been in business for ourselves for decades,and we know what we are doing, but the rising fees caught us off guard. Cities, municipalities, counties and states are raising all fees at astronomical rates to help offset the slump in their real estate income (since banks apparently don’t have to pay real estate taxes)…I’m telling you every business person I know is on their last leg. In a few more years, if things don’t turn out better for the BUSINESS PEOPLE THAT SUPPORT THE GOV, then the last ones standing will go down, and the GOV with it. Not counting the other bubbles that could blow, this one is just common sense. People talk about TAXES. This has nothing to do with taxes, or the blatent disregard for taking my money and giving it to someone else. This is just about the issue of actually getting a business started and keeping a business going. The fees are feeing us all out of business.

#6 Federal agents recently raided an Amish farm at 5 A.M. in the morning because they were selling “unauthorized” raw milk.

#7 In Lake Elmo, Minnesota farmers can be fined $1,000 and put in jail for 90 days for selling pumpkins or Christmas trees that are grown outside city limits.

#8 A U.S. District Court judge slapped a 5oo dollar fine on Massachusetts fisherman Robert J. Eldridge for untangling a giant whale from his nets and setting it free.  So what was his crime?  Well, according to the court, Eldridge was supposed to call state authorities and wait for them do it.

#9 In the state of Texas, it doesn’t matter how much formal interior design education you have – only individuals with government licenses may refer to themselves as “interior designers” or use the term “interior design” to describe their work.

#10 Deeply hidden in the 2,409-page health reform bill passed by Congress was a new regulation that will require U.S. businesses to file millions more 1099s each year.  In fact, it is estimated that the average small business will now have to file 200 additional 1099s every single year.  Talk about a nightmare of red tape!  But don’t try to avoid this rule – it is being reported that the IRS has hired approximately 2,000 new auditors to audit as many of these 1099s as possible.

#11 The city of Milwaukee, Wisconsin makes it incredibly difficult to go out of business.  In order to close down a business, Milwaukee requires you to purchase an expensive license, you must submit a huge pile of paperwork to the city regarding the inventory you wish to sell off, and you must pay a fee based on the length of your “going out of business sale” plus a two dollar charge for every $1,000 worth of inventory that you are attempting to sell off.

#12 The U.S. Food and Drug Administration is projecting that the food service industry will have to spend an additional 14 million hours every single year just to comply with new federal regulations that mandate that all vending machine operators and chain restaurants must label all products that they sell with a calorie count in a location visible to the consumer.

The following short video produced by the Institute for Justice examines some more examples of completely ridiculous regulations across the United States.  The video is very funny, but please keep in mind that all of this red tape is absolutely killing many very real businesses….

So is this what “free enterprise” is supposed to look like?

Over and over again I have written about the dangers of globalization, but no matter what changes are made a lot of companies will still not want to set up shop in the United States until something is done about all of these ridiculous regulations.

As mentioned earlier, the U.S. economy is facing a vast array of incredibly serious problems, but if government would just get off our backs at least we would have a fighting chance.

Instead, it gets worse every single year.  Each new wave of bureaucrats just seems to get worse than the wave before it.  They always seem to think that if they just write more regulations and impose more fees and require more licenses and raise more revenue that they will be able to “fix” things.

But the truth is that they always make things worse.  Our economy is literally being suffocated by red tape.  A “total control grid” is being erected all around us and most Americans are so numb that they don’t even realize that it is happening.