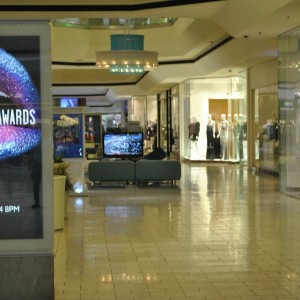 According to the National Retail Federation, Americans spent an average of 4 percent less over the four day Thanksgiving weekend than they did last year.  Overall, that means that approximately $1.7 billion less was spent at U.S. retailers compared to last year.  It had already been projected that this holiday shopping season would be the worst for retailers since 2009, but if these numbers are any indication it may be even worse than expected.  So why is this happening?  Well, basically the American consumer is tapped out.  The unemployment crisis in this country is actually getting worse, poverty is absolutely exploding and the middle class is being systematically eviscerated.  In other words, you can’t get blood out of a stone.  Many retailers are offering extreme discounts in a desperate attempt to lure more shoppers, but the money simply isn’t there.

According to Yahoo News, the decline in shopping over the four day Thanksgiving weekend was the first decline that we have seen since the last recession…

Shoppers, on average, were expected to spend $407.02 during the four days, down 3.9 percent from last year. That would be the first decline since the 2009 holiday shopping season when the economy was just coming out of the recession.

The survey underscores the challenges stores have faced since the recession began in late 2007. Retailers had to offer deeper discounts to get people to shop during the downturn, but Americans still expect those “70 percent off” signs now during the recovery.

And according to the New York Times, Americans spent a total of 1.7 billion dollars less than they did last year…

Over the course of the weekend, consumers spent about $1.7 billion less on holiday shopping than they did the year before, according to the National Retail Federation, a retail trade organization.

“There are some economic challenges that many Americans still face,” said Matthew Shay, the chief executive of the retail federation. “So in general terms, many are intending to be a little bit more conservative with their budgets.”

But this downturn for retailers did not just begin this past weekend.  There have been signs of trouble for quite a while now.

For example, posted below is a photo that one of my readers sent to me.  This is a photo of the Beverly Center Mall in Beverly Hills, California that was taken in the middle of the day on Tuesday, November 19th.  She said that there “wasn’t a soul in that mall and the employees were all standing, staring into space with nothing to do”… 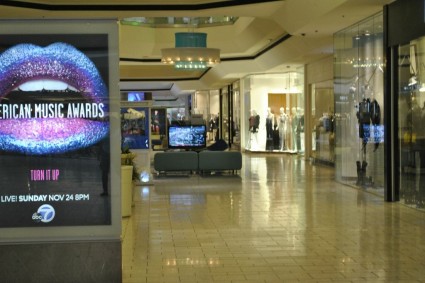 So where are all of the shoppers?

Why aren’t people out buying stuff?

Sadly, this is just the continuation of a trend that has been developing for more than a decade.  The truth is that Americans are simply not spending money as rapidly as they used to.

Posted below is a chart that shows that the velocity of M2 in the United States is at an all-time low.  In other words, the rate at which money circulates through our economy is frighteningly low and it continues to drop… 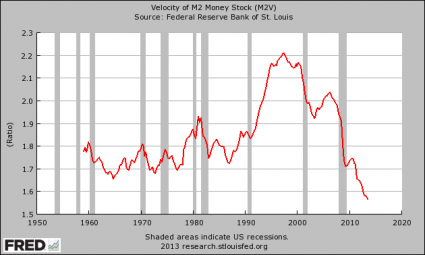 As you can see from the chart above, this decline in the velocity of money has been going on since the late 1990s.  This is a sign of a very unhealthy economy.

Most Americans know that the U.S. economy is very heavily dependent on consumer spending.  But consumers have to make money first in order to spend it.  And right now we have a major employment crisis in this country.

At this point, the labor force participation rate in the United States is at a 35 year low, and an all-time record 102 million working age Americans do not have a job.

Meanwhile, the quality of our jobs continues to decline as well.  According to the U.S. Census Bureau, median household income in the United States has fallen for five years in a row, and right now the middle class is taking home a smaller share of the overall income pie than has ever been recorded before.

So should it really be such a surprise that consumers are totally tapped out?

The money simply is not there.

After accounting for inflation, 40 percent of all U.S. workers are currently making less than what a full-time minimum wage worker made back in 1968.

A recent CNN article profiled one of these workers.  Carman Iverson is a 28-year-old mother of four that makes minimum wage at McDonald’s.  If it was not for government assistance, her and her four children would not be able to survive…

When asked how she could pay her rent on those wages, she said she had a landlord who works with her. “I’m kind of on my last little leg, because I’ve been late on rent. I’m actually behind three months in rent.

“Sometimes I can pay it, sometimes I can’t. I get paid twice a month, and both checks go to rent and the rest of it goes to utilities to the point where I don’t have any money left to buy anything for my kids — to buy them clothes, shoes or anything they need.”

She said she manages to feed her four children on $543 worth of food stamps a month.

But instead of fixing things, Barack Obama continues to pursue policies that will kill millions more good jobs.  It is absolutely amazing that there are any Americans that still support this guy.  For a long list of statistics that show how badly the economy has tanked since Obama entered the White House, please see this article.

You know that things are bad when increasing the number of Americans on food stamps by 15 million is regarded as an “economic accomplishment”.  In fact, a message recently posted on the official White House website says that “SNAP is boosting the economy right now” and that high food stamp enrollment is creating lots of jobs…

“SNAP’s effect extends beyond the food on a family’s table–to the grocery stores, truck drivers, warehouses, processing plants and farmers that helped get it there.”

So why don’t we just enroll all Americans in every welfare program?

And actually under Obama we are already well on our way.  According to the U.S. Census Bureau, 49.2 percent of all Americans are currently receiving benefits from at least one government program, and the federal government has spent an astounding 3.7 trillion dollars on welfare programs over the past five years.

Yes, there will always be poor people that cannot help themselves that will need our assistance.

But most Americans are capable of working if they could just find jobs.

Unfortunately, our jobs are being killed off and wages are going down.  The middle class is being systematically destroyed and U.S. consumer spending is drying up.

The horrible start to this holiday shopping season is just the beginning.

Things are going to get much worse than this.