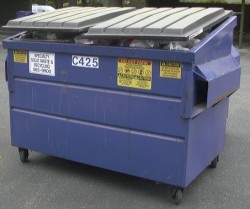 Have you ever thought about getting your food out of a trash can?  Don’t laugh.  Dumpster diving has become a hot new trend in America.  In fact, dumpster divers even have a trendy new name.  They call themselves “freegans”, and as the economy crumbles their numbers are multiplying.  Many freegans consider dumpster diving to be a great way to save money on groceries.  Others do it because they want to live more simply.  Freegans that are concerned about the environment view dumpster diving as a great way to “recycle” and other politically-minded freegans consider dumpster diving to be a form of political protest.  But whatever you want to call it, the reality is that thousands upon thousands of Americans will break out their boots, rubber gloves and flashlights and will be jumping into dumpsters looking for food once again tonight.

So is this actually legal?

One of the biggest issues facing dumpster divers is safety.  Crawling around in back alleys and side streets in the middle of the night is not exactly the safest thing to do.  But the lure of large amounts of free food is enough to keep some people coming back over and over again.

If your family was going hungry, would you go dumpster diving?

You might be surprised at who is doing it.  Dumpster diving is not just for the homeless and the unemployed anymore.  A lot of people that have decent jobs have picked up on the trend.

Just check out the following example from a recent MSNBC article….

A programmer by day, Todd takes to the streets of North Carolina by night, digging through Dumpsters at drug stores and grocery stores all around his rural neighborhood.

“You would be simply amazed at what businesses throw out,” he said. “I’ve only had to buy two loaves of bread all year. … Last week I had a trunk full of cereal, cookies, chips and ramen noodles.”

Todd slinks in and out of smelly places with low-light flashlights to evade rent-a-cops who will shoo him away.  Most nights, his 14-year-old son comes along.

Dumpster diving has become such a prominent trend that even big television news networks are doing stories about it….

The truth is that dumpster diving is just another sign of the times.

Food prices continue to rise and this is putting incredible stress on the budgets of average American families.  We just saw another huge rise in food prices during the month of August.  Just check out the following data from a recent article posted on The Economic Policy Journal….

The index for finished consumer foods jumped 1.1 percent (13.2 percent annualized) in August, the third straight rise. Over thirty percent of the August advance can be traced to meat prices, which climbed 2.4 percent (28.8 percent annualized). Higher prices for processed poultry and eggs for fresh use also were major factors in the increase in the finished foods index.

If you are married and have a couple of children it can cost a lot of money to feed them every single month.  It is not hard to understand the allure of dumpster diving for people that are having a hard time making ends meet.

Other Americans are choosing to dumpster dive because they believe that it helps them live a simpler lifestyle.  There is a growing movement of people in America that are rejecting all of the “consumerism” that we see all around us.

Today, the average U.S. household has 13 different credit cards.  We are constantly being bombarded with ads that tell us that we need more stuff in order to be happy.

Well, a lot of people have decided that is a lot of bunk and they are doing whatever they can to simplify.

Other dumpster divers are absolutely horrified by how much food is wasted in America.

It has been estimated that 263,013,699 pounds of food is thrown out in the United States every single day.

We are probably the most wasteful nation on the planet.  With the number of hungry people in the world, it is absolutely criminal how much food that we waste.

So in that sense, it is probably a good thing that dumpster divers are saving some of that food from the landfills and are finding positive uses for it.

But what is going to happen when the economy gets even worse and we start seeing fights over the food that has been left in dumpsters?

In my recent special report about poverty in America, I noted that 46.2 million Americans are now living in poverty.  For now, the U.S. government is helping feed over 45 million Americans through the food stamp program, but what is going to happen once the social safety net starts to break?

The number of good jobs in America continues to decline, and thousands more Americans fall into poverty every single day.  Things have gotten so bad that other countries are actually making videos that make fun of our poverty.

This country is rapidly losing confidence in our leaders and hopelessness is spreading like wildfire.  Today it was revealed that Barack Obama’s disapproval rating has now set a new high of 55%.  Not only that, 62% of the American people disapprove of the way that he is handling the economy.  It turns out that they don’t really think much of the Obama jobs plan after all.

Unfortunately, even though our economy is rapidly falling apart and most of our leaders are either deeply corrupt or completely incompetent, most Americans are still way too apathetic.  If you can believe it, the American people spend a whopping 53 million minutes a month on Facebook.

Right now, dumpster diving is cute and fun and an interesting way to save money, but in the future there will be millions of Americans digging around in trash cans if we don’t get this economy turned around.

This country is rapidly changing, and not for the better.