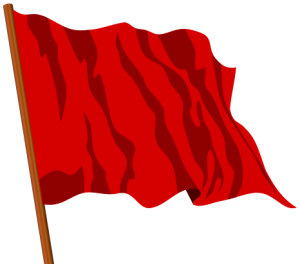 If you believe that the U.S. economy is heading in the right direction, you really need to read this article.  As we look toward the second half of 2014, there are economic red flags all over the place.  Industrial production is down.  Home sales are way down.  Retail stores are closing at the fastest pace since the collapse of Lehman Brothers.  U.S. household debt is up substantially, and in 20 percent of all U.S. families everyone is unemployed.  In so many ways, what we are witnessing right now is so similar to what we experienced during the build up to the last great financial crisis.  We are making so many of the very same mistakes that we made the last time, and yet our “leaders” seem completely oblivious to what is happening.  But the warning signs are very clear.  All you have to do is open your eyes and look at them.  The following are 27 huge red flags for the U.S. economy…

#1 Despite endless assurances from the Obama administration that we are in an “economic recovery”, the number one concern for U.S. voters is “Unemployment/Jobs” according to a recent Gallup survey.

#2 Historically, sales for construction equipment manufacturer Caterpillar have been a pretty good indicator of where the global economy is heading next.  Unfortunately, sales were down 13 percent last month and have now experienced year over year declines for 17 months in a row.

#3 During the first quarter of 2014, profits at office supply giant Staples fell by 43.5 percent.

#4 Foot traffic at Wal-Mart stores fell by 1.4 percent during the first quarter of 2014.  Analysts seem puzzled as to why Wal-Mart is “underperforming“.  Perhaps it is because the U.S. middle class is being steadily destroyed and U.S. consumers are tapped out at this point.

The company said this week that it may sell its 51% stake in Sears Canada, which operates nearly 20% of the company’s stores worldwide. It has quietly closed nearly 100 U.S. stores in the last year. Next week, it’s expected to announce dismal fiscal first quarter results and possibly yet more store closings.

“They have too many stores and they’re losing a lot of money, burning cash,” said John Kernan, an analyst with Cowen.
Kernan expects the company to close 500 of its 1,980 U.S. stores in a few years and, ultimately, to go out of business.

“The lights are going off at Sears and Kmart,” he said. “There are tumbleweeds blowing through the parking lots at Kmart. They’re basically completely irrelevant.”

The “retail apocalypse” just continues to roll on, but the mainstream media is treating this like it is not really a big deal.

#6 The labor force participation rate for Americans from the age of 25 to the age of 29 has fallen to an all-time record low.

#7 According to official government numbers, everyone is unemployed in 20 percent of all American families.

#8 As families struggle to pay their bills, many of them are increasingly turning to debt in order to make ends meet.  Earlier this month we learned that total U.S. household debt has increased for three quarters in a row.  And as I noted in one recent article, total consumer credit in the United States has increased by 22 percent over the past three years, and 56 percent of all Americans have “subprime credit” at this point.

As of July 1, federal student loan rates will edge up. Rates overall will be up 0.8% compared to current rates.

This is going to put even more pressure on the growing student loan debt bubble.

#10 U.S. industrial production fell by 0.6 percent in April.  This should not be happening if the economy truly was “recovering”.

#11 Manufacturing job openings in the United States have declined for four months in a row.

#12 Existing home sales have fallen for seven of the last eight months and seem to be repeating a pattern that we witnessed back in 2007 prior to the last financial crash.

#14 The homeownership rate in the United States has dropped to the lowest level in 19 years.

Late Friday, it was JPMorgan who said trading revenues will be down 20 percent this quarter. Now Barclays says trading revenues in the first three months were down 41 percent. The company cited “challenging trading conditions resulting in subdued client activity.” Like JPMorgan, Barclays also warned they were seeing no improvement in trading in the second quarter.

#16 Jan Loeys, JPMorgan’s head of global asset allocation, is warning that the Federal Reserve is creating a huge financial bubble which could “push us into a credit crisis“…

Where do we go from here? To this analyst, still very subdued economic growth, both at the US and global level, implies continued easy monetary policy. The risk is that bond yields rise no faster than the forwards. Financial overheating (asset inflation) proceeds much faster than economic overheating (CPI inflation). Before CPI inflation has a chance to emerge, and before monetary policy is truly above neutral, a financial bubble will have popped up somewhere and will have corrected, pushing the economy down. That is what has happened in the past 25 years. The behavior of central banks gives us no confidence that this time will be different: Central banks talk about financial instability, but appear to define this mostly in term of bank leverage. Each successive boom and bust is always in another place. A bubble can emerge without leverage. It is not possible to project exactly where this boom and bust cycle will take place as knowing where it will be would induce evasive actions that should prevent it from occurring. One possible ending, among many, is that ultra-easy rates having induced credit markets to grow much faster than equity markets, combines with reduced market making by banks (many of whom have become like brokers) to create a liquidity crisis when the Fed starts the first set of rate hikes. This could then be bad enough to close primary markets, and thus push us into a credit crisis.

#17 Peter Boockvar, the chief market analyst at the Lindsey Group, is warning that the U.S. stock market could experience a 20 percent decline once quantitative easing completely ends.

A bevy of high-profile names have warned lately that the market is on the doorstep of a major move lower. From long-term market bulls such as Piper Jaffray to short-term traders such as Dennis Gartman, expectations are high that the major averages are poised for a big dip, with calls varying from 10 percent or so all the way up to 25 percent.

#19 The number of Americans enrolled in the Social Security disability program exceeds the entire population of the nation of Greece and has just hit another brand new record high.

#20 Poverty continues to grow all over the country, and right now there are 49 million Americans that are dealing with food insecurity.

#21 According to Pew Charitable Trusts, tax revenue in 26 U.S. states is still lower than it was back in 2008 even though tax rates have gone up in many areas since then.

#22 Barack Obama is doing his best to keep his promise to destroy the U.S. coal industry…

The EPA is about to impose a new regulation that will reduce carbon emissions from existing power plants starting June 2 and will become permanent in 2015. The new regulation, according to Politico, is the “most dramatic anti-pollution regulation in a generation.” Because the new regulation will further cripple the coal industry, as coal-burning plants will be severely affected, American power will become more dependent on natural gas, solar and wind.

#23 Climatologists are now saying that the state of Texas is going through the worst period of drought that it has experienced in 500 years.

#24 It is being reported that “dozens of Texas communities” are less than 90 days away from being completely out of water.

#25 It is being projected that the drought in California will cost the agricultural industry 1.7 billion dollars and that approximately 14,500 agricultural workers will lose their jobs.

#26 Due in part to the drought, the price of meat rose at the fastest pace in more than 10 years last month.

#27 According to recent surveys, only about a quarter of all Americans believe that the country is heading in the right direction.